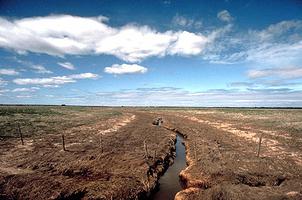 The present-day marshes are among the densest breeding grounds in the world for some species, such as the marsh hawk (photo by John de Visser). 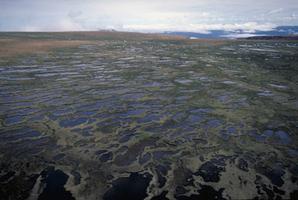 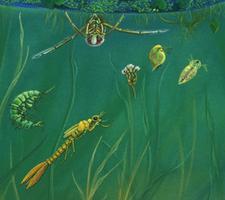 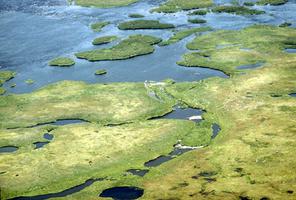 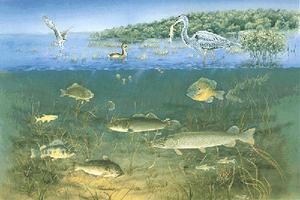 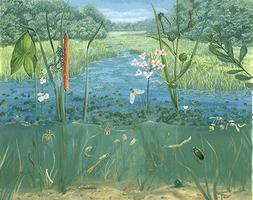 The most obvious distinguishing features of wetlands are the plant species characteristically found in each and the amount of standing water present (artwork by Claire Tremblay/Scientific documentation by Julie Therrien).
PreviousNext

Wetlands cover about 14 per cent of the land area of Canada, and are the natural habitat of over 600 species of plants, animals and insects. In addition to providing a home for these plants and animals, wetlands are an essential part of the environment because they prevent flooding, filter toxins, store groundwater and limit erosion. The most common wetland habitats are swamps, marshes, and bogs. While these three habitats are similar in having the water table at, near or above the soil surface or root layer of plants, they can also be easily distinguished by the plants characteristically found in each, as well as the amount of standing water present.

Swamps are wetlands characterized by the presence of trees growing on silty to organic muck soils. They usually occur along river floodplains and in poorly drained basins. Swamps are often seasonally inundated by water, or remain continually flooded. Most Canadian swamps are found in the Great Lakes region, Ontario’s Minesing Swamp being a representative example. Minesing is a 6,000 hectare (ha) wetland in the Nottawasaga River drainage basin west of Lake Simcoe. It is rich in herbaceous flowering plants and is forested by such common deciduous swamp trees as red maple, black ash, white elm, and silver maple. Eastern white cedar, a conifer, is also common in many swamp forests and tends to form dense groupings on shallow, wet soils where limestone is near the surface.

Marshes are treeless wetlands with an abundance of herbaceous plants, including grasses, sedges, reeds and cattails. Marshes usually form in the quiet shallows of ponds, lakes and rivers, and along sheltered coastlines where mineral nutrients are available. They are highly productive ECOSYSTEMS teeming with life.

The prairie pothole region of central North America is a vast area dotted with countless sloughs, ponds, and lakes, many of which are abundant with marsh vegetation. The region serves as the most important waterfowl nesting area on the continent. About 750,000 km2 of this kind of habitat occurs in Canada across southern Manitoba, Saskatchewan, and Alberta.

Saltwater marshes are restricted to temperate regions. In North America, they are found mainly along the southern and eastern coastlines from the Gulf of Mexico to the Maritime provinces. Tantramar Marsh, near Aulac, New Brunswick, is a historically famous and important saltwater marsh. Others of particular importance in Canada are found at Kamouraska, Québec, along the broad low coastline of Hudson and James Bay, and at the Fraser River estuary in British Columbia. In western North America, numerous inland saltwater marshes fringe the shores of saltwater lakes (the remnants of ancient seas) and alkali ponds.

Bogs are poorly drained, peat-filled depressions dominated by sphagnum mosses, heather-family evergreen shrubs, and conifers such as black spruce and larch. The water table, at or near the surface of the living moss layer, may be visible as open pools of water. The extensive cover of sphagnum mosses makes bog waters acidic, preventing the growth of many micro-organisms.

The water in bogs is low in oxygen because there is little water movement to create aeration. Bogs are also relatively cold because of the insulating effect of the surface blanket of moss. As a result, little decay occurs in the accumulating layers of organic debris, which build up as peat. Bogs are only one of several kinds of wetlands, called "peatlands," that develop in the cool, moist, previously glaciated regions of the Northern Hemisphere.

Bogs are particularly common features of the poorly drained regions of the Boreal Forest on the Precambrian Shield in northern Canada. Bogs south of the boreal forest, such as the Mer Bleue near Ottawa, are remnants of the boreal forest formed after the retreat of the ice sheets during the last Ice Age. Such bogs have remained restricted to the poorly drained sites in which they were created.

Bogs are also common features in most of Atlantic Canada. They are abundant in Newfoundland, for example, and in Nova Scotia they are found from near sea level on Briar Island at the western tip of the province to the heights of the Cape Breton Highlands.

In countries such as Ireland, dried peat has traditionally been used as fuel, but peat moss is also used extensively as a soil conditioner. Peat harvesting for this purpose is readily evident along the Trans-Canada Highway in parts of the Gaspé Peninsula of Québec.