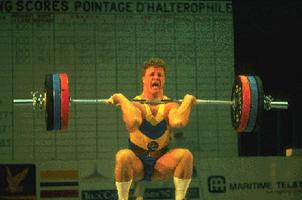 This spectacular indoor sport is composed of 2 events: the snatch, and the clean and jerk. In the snatch, the athlete lifts the bar to arm's length in one continuous motion. In the clean and jerk, he lifts the bar to his shoulders, then jerks it overhead to arm's length. The athlete is allowed a total of 3 attempts in each event. The best snatch is added to the best clean and jerk to give a total result. Medals are awarded in each event, with the overall winner being determined by the total. In the case of a tie, the lighter competitor is declared the winner. Both events, which demand great speed, balance, flexibility and power, are performed on a 4 m square platform before 3 judges. The apparatus used is standardized by the IWF and manufactured to metric specifications.

Bodyweight classes have changed several times over the past 100 years. Today, male competitors are divided into 8 bodyweight classes, from 56 kg to 105+ kg. Female competitors are divided into 7 classes, from 48 kg to 75+ kg. The first Women's World Championship was held in Daytona Beach, Florida, in 1987. Women competed in weightlifting at the Olympics for the first time at the 2000 Sydney Olympic Games. Canada's lone entry in women's weightlifting, Maryse Turcotte, finished fourth in the 58-kg class.

The legendary figure of Canadian weightlifting was strong-man Louis Cyr, who was undefeated in competition resulting from his open challenge to any man in the world. Among his many outstanding feats were lifting 250 kg with one finger and, in Boston in 1895, lifting 1967 kg (4337 lbs) on his back - claimed to be the greatest weight ever lifted by one man. In formal competition, Gerald Gratton won the silver medal at the 1952 Helsinki Olympic Games, as did Jacques Demers at the 1984 Los Angeles Olympic Games. Doug Hepburn won the world heavyweight championship in Stockholm in 1953.