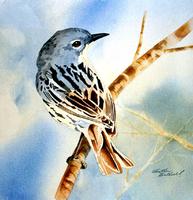 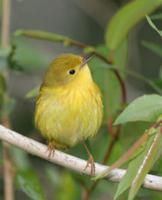 The yellow warbler is also called the wild canarie for its yellow plumage (photo by Brian M. Wolitski).
PreviousNext

Warbler is a name applied to several groups of birds, primarily the New World wood warblers (family Parulidae), and Old World warblers (Sylviidae) of which only 3 species commonly breed in Canada (see kinglet).

About 37 of the 115 species of wood warbler nest in Canada. They are widespread, breeding virtually everywhere south of the treeline and forming spectacular mixed-species flocks during migration, especially in the East.

Most Canadian breeding species belong to genus Dendroica. Kirtland's warbler, until recently thought to breed only in a restricted area of Michigan, is now believed to have nested in Ontario and possibly Québec. Two other widespread genera of several species are Vermivora and Oporornis, the latter known as "skulkers" of low brush.

Many warblers have bright yellow plumage which gives them the colloquial name wild canary, a term also applied to American goldfinches (Carduelis tristis). In spring males are usually brightly coloured; females have duller plumages, as do males in fall. Warblers are mostly small, active birds. Their sharp, pointed bills are ideal for probing for insect prey, though some species also catch insects by aerial pursuit. Flycatchers usually have flatter bills with bristles at the base.

Exceptions to the usual cup-shaped nests in shrubs and forks of trees include the dome-shaped ground nest of the ovenbird (Seiurus aurocapillus); the hanging, lichen-based nest of the northern parula (Parula americana); and the hole nest of the prothonotary warbler (Protonotaria citrea), the only species that uses artificial nest boxes.

Declines in several warbler species have prompted a marked increase in research on migratory bird species on their wintering areas in South and Central America.