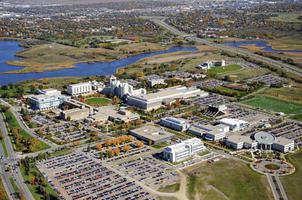 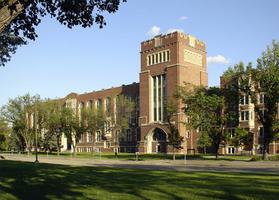 The University of Regina, REGINA, was founded in 1911 as Regina College by the METHODIST Church (which would join other Protestant denominations in 1925 to become the UNITED CHURCH). Starting with only 27 students, Regina College developed into a junior college and in 1925 became affiliated with the UNIVERSITY OF SASKATCHEWAN and began offering courses in arts and science. In 1934 it was transferred from United Church control to the University of Saskatchewan. In 1965 the college moved to southeastern Regina; it obtained status as an independent degree-granting university on 1 July 1974, when it became the University of Regina.

The University of Regina's main campus and original College Avenue campus, covering 930 acres, are both located in Wascana Centre, one of the largest urban parks in North America. The University counts more than 14 000 full-time and part-time students. It is home to 10 faculties and 25 academic departments with programs leading to bachelor's, master's, and doctoral degrees. The University works closely with its three federated colleges--Campion College, FIRST NATIONS UNIVERSITY OF CANADA, and Luther College--to offer diverse educational experiences.

The University of Regina was the first university in Western Canada to offer a co-operative education program. The program is available in arts, business administration, engineering, and science (computer science, physics, chemistry and biochemistry, geology, and mathematics and statistics [including actuarial science internships]).

The University's motto is "As one who serves" and its primary colours are green and gold.