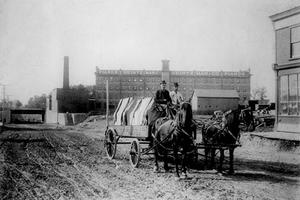 A horse-drawn piano delivery wagon north on Keele and Dundas Streets, circa 1910 (courtesy of the West Toronto Junction Historical Archives. 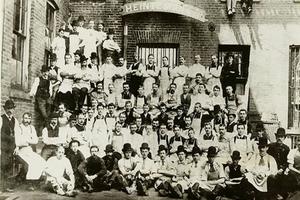 Employees at the Heintzman Piano Company factory, circa 1900 (public domain). 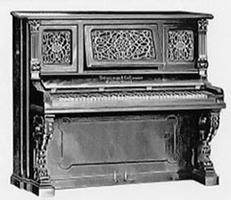 Legend has it that Theodor Heintzman made the first Canadian Heintzman piano in a Toronto kitchen and sold it immediately, using the proceeds to build his business. He founded his Toronto business around 1860, incorporated it in 1866 and by 1888 Heintzman was able to open a new piano building factory in the Junction.

By the 1890s, the Heintzman & Co. piano factory had 200 workers and was cranking out 1,000 new pianos a year. In those days, without radios, let alone televisions or computers, the piano was the centre of both home and public entertainment.

Heintzman pianos certainly weren't the cheapest brand on the market, but they sold well due to their reputation for high quality. As the company prospered, so did Theodor and his business-minded sons. They built some of the finest homes in the Junction, which was then a thriving Toronto suburb. Heintzman remained a popular Toronto business well into the 20th century, eventually relocating to the Owen Sound area in the 1970s. The family's legacy in the Junction is retained by their heritage houses, and as the namesake of nearby Heintzman Street, which used to lead to their factory.