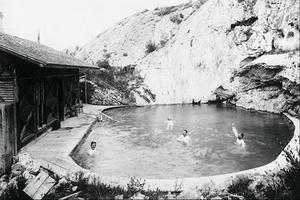 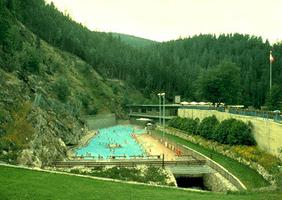 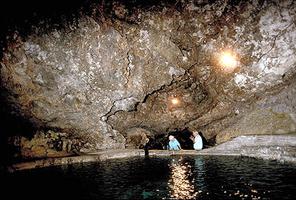 A spring is a point of natural, concentrated groundwater discharge from soil or rock. Some springs are located in river or lake beds (subaqueous springs) or below mean sea level along the coast (submarine springs), but many are found some distance from surface water bodies.

All spring water contains some dissolved salts, derived from slow dissolution of minerals from the rocks which the water contacts during its movement to the spring. Freshwater springs discharge water with dissolved mineral content of under 1 g/L. Mineral springs have dissolved mineral contents of 1-35 g/L (the approximate salt concentration in seawater). Brine springs have concentrations ranging to over 300 g/L.

All thermal springs known in Canada occur in the western mountain region of Alberta, in BC, in the Yukon Territory and in the Northwest Territories, where high relief permits deep circulation of groundwater (fed by infiltrating rainwater and snowmelt) that causes geothermal heating of the water. Some of these springs are only warm (eg, the Cave and Basin Springs in Banff National Park, Alta; Rabbitkettle Hot Springs in Nahanni National Park, NWT). Many are true hot springs (eg, Upper Hot Spring in Banff; Fairmont Hot Springs and Harrison Hot Springs, BC; Takhini Hot Spring, YT).

Most of the thermal springs are also mineral springs. The notable exception is the McArthur Hot Springs, YT, with a dissolved mineral content of under 0.2 g/L. There are no geysers in Canada.

Cold mineral springs are found in other parts of Canada. Cold brine springs occur in areas with marine sedimentary rocks (eg, limestone, dolomite, gypsum, rock salt) near the eastern edge of the Interior Plains in Alberta and Manitoba, and in sedimentary basins in the St. Lawrence Lowland and Appalachian regions in Québec, New Brunswick and Nova Scotia. The coldest springs known in Canada are found near the head of Expedition Fjord on Axel Heiberg Island, Nunavut. Their water temperatures range as low as -2.9° C. Freezing of their water is prevented by depression of the freezing point due to high dissolved mineral content (over 75 g/L).

Some thermal and mineral springs produce spring deposits at or near their outlets through precipitation of part of their mineral content. The mineral composition of a spring deposit reflects the chemical composition of the spring water. For example, the Cave and Basin Springs deposit mainly calcium carbonate (travertine), through loss of CO2 and evaporation; the McArthur Hot Springs produce small amounts of silica sinter, through cooling and evaporation; the Paint Pots, in Kootenay National Park, BC, deposit iron sulphates and iron oxyhydroxides, through evaporation, oxidation and hydrolysis; and the cold Fly-by Springs in the Mackenzie Mountains deposit barium sulphate. The most spectacular spring deposit is the terraced travertine cone of Rabbitkettle Hot Springs.