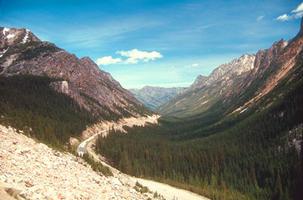 The all-weather Trans-Canada Highway opened over the pass in 1962 (Corel Professional Photos). 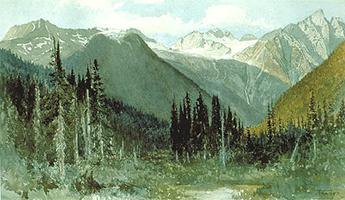 Rogers Pass, elevation 1323 m, in BC's Selkirk Mountains, was named for A.B. ROGERS, hired by the CANADIAN PACIFIC RAILWAY to find a route through this range. Rogers found the pass from the west via the south fork of the Illecillewaet River 28 May 1881. The following year, on July 24, Rogers again reached the pass, this time from the east to satisfy his employers that the Selkirks could be breached by the pass.

During the summer of 1885 the railway was constructed over the pass at great expense. Over 6.4 km of snowsheds (31) were built to protect trains, trackage and workmen from AVALANCHES (the area receives up to 15 m of snow each winter). The CPR soon after built Glacier House, a world-renowned hostelry just west of the pass. After much damage and loss of life from avalanches, the 8 km Connaught Tunnel was pushed through below the pass (1916).

The 14.7 km Mount MacDonald tunnel was constructed by the CPR beneath the pass to cut down track grades for westbound trains. Completed in December 1988, the tunnel is North America's longest railway tunnel. The all-weather TRANS-CANADA HIGHWAY opened over the pass 1962. An extensive avalanche safety program is carried out in the pass area. 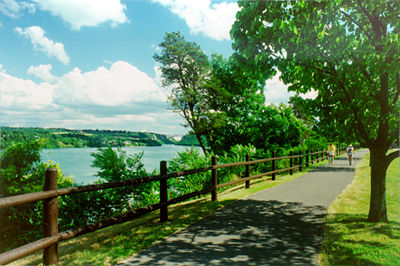