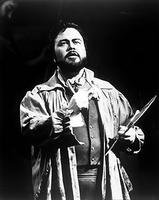 Richard Charles Margison, tenor (b at Victoria, BC 15 July 1953). He first studied piano with his mother (both parents were musicians), and made appearances as a guitarist-folksinger-songwriter at local venues before undertaking serious vocal studies with Selena James in 1976 at the Victoria Conservatory of Music. He also coached with Frances Adaskin. Margison learned his craft and developed his considerable stage skills performing with local companies (Gilbert & Sullivan, Bastion Theatre, Pacific Opera Victoria) and with Canada Opera Piccolo, where he worked with Léopold SIMONEAU and Pierrette ALARIE. He debuted with the Vancouver Opera in 1985 in his first major role as Lensky in Eugene Onegin, and has returned to sing with that company in subsequent years. He enlarged his repertoire in appearances with opera companies in Calgary, Edmonton, Winnipeg, Montréal and Ottawa, and also sang in oratorio and in concert with major Canadian orchestras.

Margison first sang with the CANADIAN OPERA COMPANY in 1989, and that same year he made his debut at the English National Opera, singing Riccardo in Un Ballo in mascheraand earning critical praise for his sure lyric tenor voice. This launched a flourishing international career which, by 2002, had included performance of the major operatic roles, particularly of the Italian and French repertoire (Verdi, Puccini, Boito, Bizet) for leading opera companies in Vienna, Berlin, San Francisco, Hamburg, Melbourne, Washington, London, Brussels, Chicago and Munich. He sang Pinkerton in Madama Butterfly (conducted by Placido Domingo) for his Metropolitan Opera debut in April 1995, then Don José in that company's productions of Carmen in 1996. He continues to perform regularly at the Metropolitan. Margison's recordings include 3 CDs released on CBC of operatic arias, and the complete Don Carlo recording, conducted by Bernard Haitink. Margison's true and flexible lirico spirito (lyric-dramatic) tenor voice possesses a warm evenness of tone throughout a range of golden brilliance and impressive size which captivates audiences and critics. Margison is currently regarded as one of the leading Verdi tenors in the world.