Nitassinan is the homeland of the Innu and Mi’kma’ki is the homeland of the Mi’kmaq. Nitassinan stretches from the north shore of the St. Lawrence River in Quebec, across Labrador to the Labrador Sea. This traditional territory is largely located in the Canadian Shield. It’s covered with boreal forest, alpine tundra and countless lakes and rivers. French explorers originally called the Innu the Montagnais or “of the mountains,” due to the region’s rugged terrain.

Mi’kma’ki stretches across the Maritime provinces, through southeastern Quebec, and into Newfoundland. As part of the Appalachian region, the area is characterized by the Appalachian mountain range, as well as the islands, rivers, and coves of what is now Atlantic Canada. The region provided much in the way of fish, animals, and other resources for the Mi’kmaq.

Of the province’s three reserves, the Innu community of Natuashish has the largest landmass, at about 43 km2. Located on the north coast of Labrador at Sango Bay, Natuashish is accessible by air year-round, or by ferry from early July to early November. During the winter months, a snowmobile trail called the Trans Labrador Trail connects Natuashish with Inuit communities along the coast.

Newfoundland and Labrador’s other Innu reserve, Sheshatshiu, is located at a traditional gathering place in central Labrador, 33 km north of Happy Valley-Goose Bay. Sheshatshiu, meaning “narrow place in the river,” is where fresh, inland glacial water mixes with the salt water of the North Atlantic, at the head of Lake Melville. It’s an area rich in fish and game and has been attracting people for thousands of years.

The Mi’kmaq reserve, Miawpukek, was a frequent camping spot used by the semi- nomadic First Nation. Meaning “middle river,” Miawpukek is located at the mouth of the Conne River, in southern Newfoundland. The nearest service centre and airport is at Gander, about 250 km northeast.

Indigenous people have lived in the Newfoundland and Labrador region for over 10,000 years. The Innu were traditionally a semi-nomadic people who lived throughout Labrador. There is archaeological evidence in the Sheshatshiu region, home to one of the present-day Innu reserves, that the Innu have been visiting the area for at least 2,000 years. Labrador’s rivers, coastline and boreal forest meant an abundance of fish and animals. The Innu hunted caribou, moose, bear, beaver and seal, and fished for salmon and trout. The Mi’kmaq, also a traditionally semi-nomadic people, made seasonal trips throughout Atlantic Canada and northern New England to hunt, trap and fish. The location of the present-day Mi’kmaq reserve, Miawpukek, was a popular semi-permanent campsite.

Did You Know?
Newfoundland was once home to the Beothuk, an Indigenous people who lived primarily along the island’s coast. The establishment of permanent European settlements in the 1700s significantly altered the Beothuk way of life, as they were increasingly denied access to the bays where they fished. Lack of resources combined with exposure to European diseases meant that the Beothuk population rapidly declined. The last known Beothuk, Shawnadithit, died of tuberculosis in St. John’s in June 1829.


The creation of most reserves in Canada began in the mid-1800s. However, Newfoundland and Labrador’s first reserve, Miawpukek, wasn’t created until 1987. Though Indigenous peoples in the province had some of the country’s earliest contact with Europeans — the Norse around 986 and Basque whalers in 1540 — European settlement in the region was slow to start.

Until the late 1700s the region’s only form of non-Indigenous governance was the rule of fishing admirals. A fishing admiral was the captain of the first ship to arrive at a harbor at the start of fishing season. British fishing boats would arrive on the coast of Newfoundland in the spring and return to Britain in the fall. Unlike the rest of Canada, Britain viewed Newfoundland as more of an industry than a colony to be settled and developed. In Labrador, the French incorporated the Innu into their fur trade, and the Hudson’s Bay Company established their first trading posts in 1836. However, trade between the region’s Indigenous peoples and Europeans didn’t develop to the same extent as it did elsewhere in the country, and wasn’t governed by any legislation. As a result, government contact with the Mi’kmaq was rare until the late 1800s, and with the Innu until the mid-1900s.

Because Britain was slow to settle Newfoundland and Labrador, when the colony voted to join Confederation in 1949, there were still no treaties between the Inuit, Innu or Mi’kmaq and the government. Moreover, the terms of the province joining the rest of Canada made no mention of Indigenous peoples. Elsewhere in the country, the relationship between the federal government and First Nations was governed by the Indian Act — a law aimed at assimilating First Nations into Canadian society while providing them with certain services. Some argue that the reason Indigenous peoples weren’t included in the terms of Newfoundland and Labrador’s Confederation is because the federal government wanted to avoid the high cost of delivering these services. Others suggest that provincial officials didn’t want First Nations to lose their right to vote, which would happen if they came under the Indian Act (see Indigenous Suffrage).

After years of negotiation, in 1984, Mi’kmaq living at Miawpukek were registered as a band under the Indian Act. In 1987, the community was granted reserve status. Many Mi’kmaq in Newfoundland who are not members of Miawpukek are members of the Qalipu First Nation, formerly known as the Federation of Newfoundland Indians. In 2011, the Qalipu First Nation was registered as a band; however, members don’t hold any reserve lands.

For the Innu, the process of receiving federal recognition took even longer. In the 1960s, the provincial government built homes at Sheshatshiu and Davis Inlet, a community about 18 km east of the present-day Natuashish reserve. The government also made it mandatory for Innu children to attend school. If they didn’t, the government threatened to stop social assistance payments to their families. This threat forced the still semi-nomadic Innu to live in the same place for much of the year, and the lifestyle change came as a shock. At Davis Inlet, for example, problems quickly multiplied. Located on an island off the coast of northern Labrador, the community was cut off from the mainland twice a year during the freezing of ice in fall and the break-up of ice in spring. The rocky island made it impossible to lay sewage systems, and the houses were little more than tar paper shacks. The community’s growing population soon outgrew their living conditions. Alcoholism, suicide, and substance abuse in Davis Inlet repeatedly made national headlines.

In 2002, the community was relocated inland to their current home of Natuashish in Sango Bay. This community is connected to the mainland, unlike Davis Inlet, and was built with better homes, sewage systems, roads and schools. Also in 2002, the Canadian government recognized the Innu as status Indians for the first time. Natuashish and Sheshatshiu were given reserve status shortly thereafter, in 2003 and 2006 respectively. 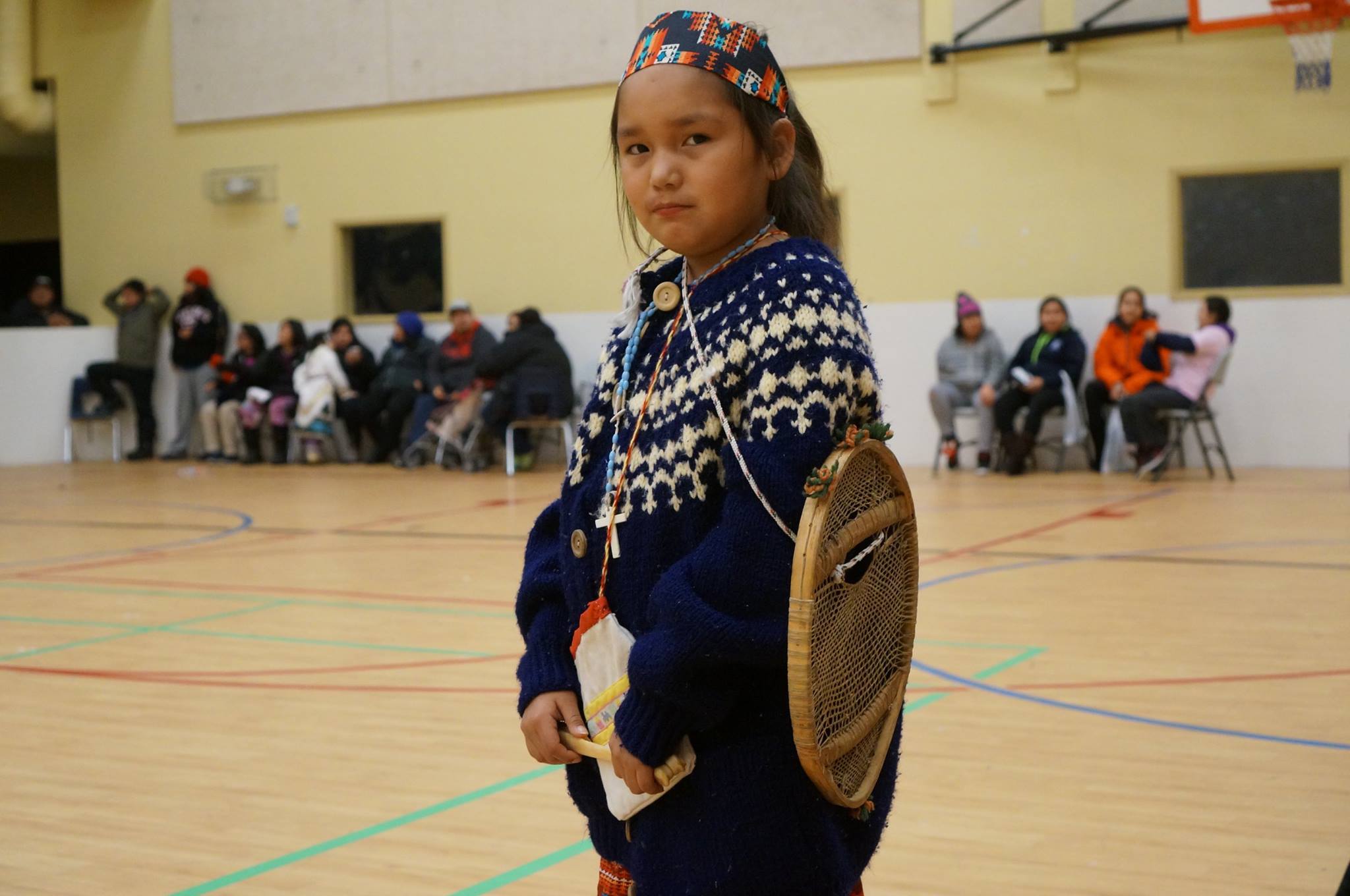 Innu living in Natuashish and Sheshatshiu speak dialects of Innu-aimun, which belongs to the Algonquian language family ( see Indigenous Languages in Canada). These communities have a young population: over 55 per cent of residents on both reserves are under the age of 25, compared with 25 per cent provincially.

Mi’kmaq living in Miawpukek speak the Mi’kmaw language, which is also a part of the Algonquian language family. Miawpukek’s population is also relatively young, with 34 per cent of residents under the age of 25. 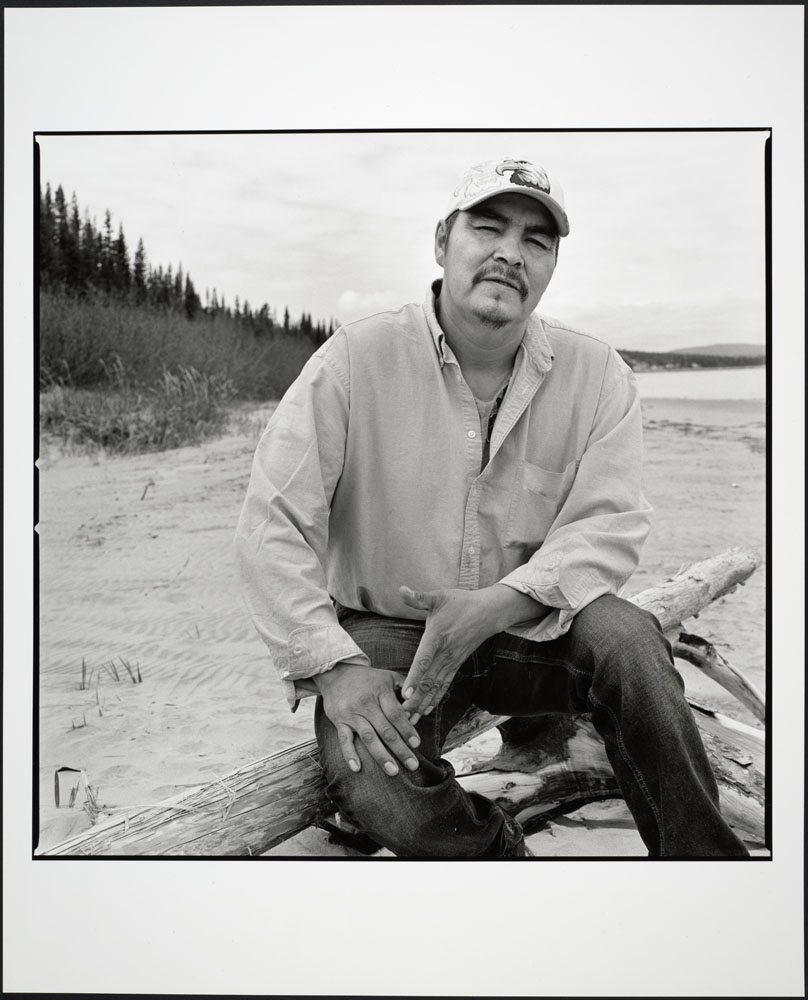 Portrait of Joseph Riche, former grand chief of the Innu Nation and resident of Sheshatshiu, 2010.

Reserves in Canada have the option of three electoral systems: Those laid out in the Indian Act, the First Nations Elections Act, or a custom system, determined by each band. All three reserves in Newfoundland and Labrador have opted for a custom election system. Miawpukek elects a chief and six councilors every two years, and combines traditional forms of government with elements of elections under the Indian Act. For example, the traditional government of Miawpukek consisted of a saqamaw or chief, as well as an appointed second chief who filled in when the chief was away from the community. This tradition continues under the custom election system, as the councilor with the highest popular vote becomes the second chief.

In addition to their band councils, residents of Sheshatshiu and Natuashish are also represented by the Innu Nation. Founded in 1976 as the Naskapi Montagnais Innu Association, the organization protects Innu culture, land and resources, provides a unified political voice for Innu people. The positions of grand chief and deputy grand chief switch between Sheshatshiu and Natuashish at each election for the organization’s executive.

The provincial government takes Innu children from their families more frequently than children living in other communities. Residents of Sheshatshiu and Natuashish, for example, make up 0.4 per cent of the provincial population, yet children from these reserves account for 20 per cent of those in the care of the province. The Innu Nation and the provincial and federal governments are launching an inquiry into Innu children in the foster care system. Family violence and addiction are major problems in Innu communities. To combat these cycles of abuse the Innu Nation has invested in women’s shelters and treatment and addiction programs. They also provide community members with regular land based activities such as hunting and snowshoeing.

Miawpukek has faced its share of challenges as well. In the 1970s, for example, the community had an unemployment rate of nearly 90 per cent. At the time, the community didn’t have reserve status or access to on-reserve services. In the years since becoming a reserve Miawpukek has been able to turn its economy around and now has an employment rate of nearly 100 per cent.

Peter and Pasamay Doucette dance during the 2009 powwow in Miawpukek.

In the summer and early fall, many music festivals are held in Natuashish and Sheshatshiu, featuring both traditional and non-traditional music. The drum is held in high regard in Innu communities, and someone has to dream of the drum three times before they’re allowed to play. Dancers form a circle around a lone drummer, who drums and sings for good fortune. Innu musicians who often play these festivals include singer-songwriter David Hart of Sheshatshiu, and the rock band the Gregoire Boys from Natuashish. Besides these festivals, Innu from across the province have large gatherings in the bush, setting up neighbourhoods of tents to be together, play music and eat traditional foods.

Marry Ann Penashue is a prominent Innu painter from Sheshatshiu whose work is displayed in galleries around Canada. Christine Poker of Natuashish is an Innu filmmaker who has made a number of films about Innu legends.

Miawpukek is home to the province’s largest powwow, held annually since 1996. The community is also home to a number of artists, including fancy shawl dancer Robin Benoit, visual artist and traditional dancer Jerry Evans, and author Chief Mi’sel Joe.