Pickering, Ontario, incorporated as a city in 2000, population 91,771 (2016 census), 88,721 (2011 census). The city of Pickering is located 43 km east of Toronto on  Lake Ontario. It was named after the town of Pickering in Yorkshire, England. Pickering is also part of the Regional Municipality of Durham.

Pickering, Ontario, incorporated as a city in 2000, population 91,771 (2016 census), 88,721 (2011 census). The city of Pickering is located 43 km east of Toronto on  Lake Ontario. It was named after the town of Pickering in Yorkshire, England. Pickering is also part of the Regional Municipality of Durham.

Pickering is located on the traditional territory of the Huron-Wendat, Haudenosaunee and Mississauga (see Anishinaabe). At the time of European settlement, it was the Mississauga who inhabited the north shore of Lake Ontario, including what would become Pickering.

Records indicate there were about 800 settlers living in the Township of Pickering in 1825. The area was heavily wooded. There were three sawmills and some shipbuilding at the mouth of the Rouge River. The area also attracted farmers from Britain and the United States. By 1850, when Pickering became a county, it had a population of over 6,000. In the 1870s, the Frenchman’s Bay Harbour Company built a lighthouse, wharf and grain elevator at Frenchman’s Bay. A small village grew up around this development.

In 1923, the provincial and federal governments hastily arranged two treaties in order to extinguish the Mississauga’s title to the land. Known collectively the Williams Treaties, the document pertaining to the Pickering area was signed in November 1923. It included four Mississauga First Nations: Alderville, Mud Lake (now known as Curve Lake), Rice Lake (now known as Hiawatha) and Scugog Lake. 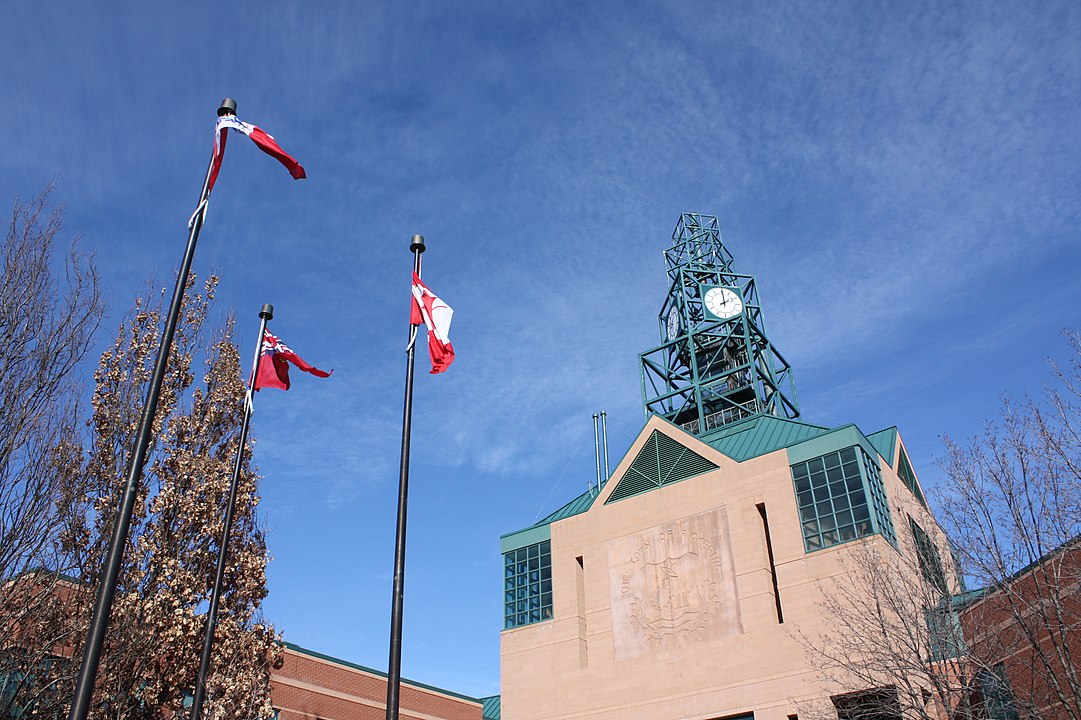 (“Pickering City Hall” by Snowjam at English Wikipedia is licensed under CC BY-SA 3.0.)

Through most of the later 19th and early 20th centuries, the area remained primarily agricultural. The population numbers remained static. Like many communities on the periphery of Toronto, the pace of development in Pickering increased after the Second World War. Many people moved into the area in the 1950s. After 1960 major housing developments sprang up. Manufacturing companies also moved into the area attracted by access to Highway 401 and other transportation routes. In 1965, Ontario Hydro began to build the Pickering nuclear generating station just east of Frenchman’s Bay, adding further growth. In 1974, the township was divided with the eastern and northern parts. The villages of Brougham, Claremont, Green River, Greenwood and Whitevale became the town of Pickering. The remainder became the town of Ajax.

Today, like many communities in the Greater Toronto Area, Pickering’s population is ethnically diverse. According to the 2016 census, large ethnic groups living within the town include South Asian people (15.2 per cent of the population), Black people (10.8 per cent), Filipino people (3.7 per cent) and Chinese people (2.7 per cent). The majority of immigrants living in Pickering cite their country of birth as the United Kingdom, followed by Jamaica, India, the Guyana and the Philippines. Indigenous peoples make up 1.2 per cent of Pickering residents.

The Pickering Museum Village, located in Greenwood, is a collection of 19th century buildings with costumed interpreters. Four conservation areas and Seaton Trail preserve some of the city’s natural landscape. In addition, Pickering includes a portion of Rouge National Urban Park.