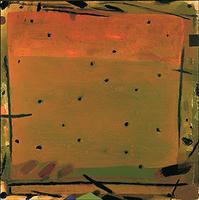 One of Canada's foremost contemporary practitioners of colour-field painting and assembled steel sculpture, Otto Rogers was encouraged to pursue an artistic career by Wynona Mulcaster while attending Saskatoon Teachers' Coll (1952-53). He attended the University of Wisconsin (1953-59). He taught at the University of Saskatchewan from 1959 to 1988, serving as chairman of the art department 1973-77.

In 1960, Rogers adopted the Baha'i faith. Since then he lectured and wrote extensively on this religion, emphasizing its importance to his art. In 1988, Rogers moved to Haifa, Israel, to continue a strong leadership role in the Baha'i faith. Rogers returned to Canada in 1998 to set up his studio in Milford Ontario.

While recognizing the spiritual element in his art, some critics claim that the prairie environment has been equally important in his work. His work is represented in many Canadian and international collections, including those of the Museum of Fine Arts, Boston, the Art Gallery of Ontario, the National Gallery of Canada and the Musée des beaux-arts de Montréal.