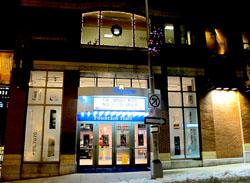 The dream of Leon Major, its first artistic director, Neptune Theatre, Halifax, opened with a production of Shaw's Major Barbara in a newly renovated 521-seat theatre on 1 July 1963. A triumph of idealism over fiscal despair has characterized Neptune throughout its history. Envisioned as a year-round touring repertory company modelled on the Moscow Art Theatre and producing classical drama, the best of contemporary theatre, and new Canadian plays, the financial strain associated with its first renovations forced Neptune into becoming a subscription-based stock company augmented by visiting stars. New and experimental works were relegated to a studio stage. However, its high production standards and commitment to the development of local actors have served Neptune well, and with maturity, the theatre has realized its founder's dream of a fine ensemble company.

Major's tenure as artistic director (1963-68) was characterized by seasons that featured the classics interspersed with contemporary plays - such as the first North American production of A Man for All Seasons (1968) and Canadian plays such as Arthur Murphy's The Sleeping Bag (1967). His successor, Heinar Piller, forced to introduce subscription ticket sales to increase revenue, bolstered the company's artistic integrity by introducing a Studio series for workshop productions.

Under Robert Sherrin (1971-74) Neptune completed its transformation from a resident repertory theatre to a stock company with visiting stars - operating November through August each year. Sherrin, aided by local grants, established the Second Stage. There, for 3 active seasons, he presented new works such as James Nichol's Sweet Home Sweet (1972), which introduced Black actors on a Neptune stage.

John Wood (1974-77) attempted to re-establish Major's dream of a theatre company, but pushed Neptune into debt with productions such as Hamlet (1974), Michael Ondaatje's The Collected Works of Billy the Kid (1976), and Gordon Pinsent's John and the Missus. Wood's production of The Effect of Gamma Rays... (1977) brought an almost entirely Black cast to the main stage for the first time. David Renton, a founding member of the company, served as acting director for the 1977-78 season, bringing it in under budget and laying plans for the "Young Company.".

John Neville (1978-83) was credited with wiping out the accumulated deficit by increasing the authority of the general manager, eliminating the summer season, attracting corporate sponsors (beginning with Othello, 1978), and importing stars like Tony Randall for The Sea Gull (1979). His rock-musical production of Medea (1981) recalled Piller's production of The Lion in Winter for which the Maritime band April Wine had supplied a blend of rock and Gregorian chant. Neville activated Renton's Young Neptune Company and, with funding from du Maurier, established the Lunchtime Theatre series which continued through his tenure. Unable to win a commitment to a new building, Neville did not renew his contract and was succeeded by Tom Kerr (1983-86).

Kerr brought an increasing reliance on musicals such as John Gray's Don Messer's Jubilee (1985), which toured nationally. He revitalized the Young Neptune Company under Jennette White and, in 1983, established the Neptune Theatre School.

Richard Ouzounian (1986-89), who had earlier directed John Gray's 18 Wheels for Neptune, continued popular musicals balanced with a commitment to new plays. George Boyd's Shine Boy, produced in 1988 as a musical play, tells the story of George Dixon, the first Black boxing world champion. Ouzounian's updated version of Tartuffe (1987), in which Orgon and Tartuffe represented US president Ronald Reagan and Canadian prime minister Brian Mulroney, was produced for national television the same year. Defeated by inherited deficit problems, Ouzounian left in 1989 and Tom Kerr returned for a year as guest director.

Linda Moore, appointed artistic director in 1990, continued the pattern of presenting popular fare - such as Les Misérables (1994) - on the Mainstage and balancing it by new or risky material - (Soh Kuramoto's Japanese play, Kanashibetsu, about closing mining towns, 1997) in the Studio series. Under Moore's directorship an multi-million-dollar refurbishment of Neptune's facilities - including a new 200-seat Second Stage, rehearsal hall, shop facilities and home for the theatre school - was carried out. Fittingly, Major Barbara was the play chosen to open the new facility in September 1997.

During and immediately following the extensive renovations the theatre experienced a drop in audience and revenue, causing several years of financial difficulties while the company found its feet again. In 1999 Linda Moore announced her decision to leave Neptune in May 2000. Ron Ulrich was appointed as her successor and guided the theatre through a period of strong financial success until his departure after the 2007-08 season. His tenure boasted many successes, among them Disney's Beauty and the Beast (2007), Cats (2004), Copenhagen (2003), The Syringa Tree (2004) and Who's Afraid of Virginia Woolf? (2006). George Pothitos took up the duties of resident artistic director in 2009.

Neptune Theatre continues to support the work of regional playwrights as well as blockbuster hits. Its diverse operations include Mainstage and Studio Series productions, the touring Young Neptune Company and the Neptune Theatre School.