This article was originally published in Maclean’s magazine on November 2, 1998. Partner content is not updated.

This article was originally published in Maclean’s magazine on November 2, 1998. Partner content is not updated. 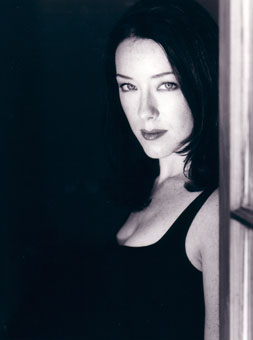 Standing on a street in downtown Budapest, Molly Parker and Ralph Fiennes sip Hungarian champagne from plastic cups. It is late morning. They have just wrapped their final scene together in The Taste of Sunshine, a sprawling period epic being produced in Hungary by Canada's Robert Lantos. Parker has spent the previous four weeks pretending she is married to Fiennes, on camera at least. And now she is flying off to London, to play someone else's wife in someone else's movie. Fiennes seems genuinely sad to see her go. "Molly's wonderful," he says. "I'm sorry we haven't had more scenes together. There's this spontaneous quality of truth about her which has brought something quite special to the film." And Istvan Szabo, The Taste of Sunshine's Hungarian director, is effusive. "Molly has this incredible radiance," he says. "It's not something you can learn. You either have it or you don't. What I would really like to do is make a film with Molly as the lead."

Molly Parker seems to have an effect on people. She first turned heads in the most unlikely fashion - suspending disbelief with her uncannily sympathetic portrayal of a necrophile in Kissed (1996), a Canadian movie adapted from a short story by Barbara Gowdy. The performance won her a Genie and rave reviews from around the world. Since then, Parker has been busy, to say the least. Last year, she cozied up to the couch potato played by Don McKellar in CBC's Twitch City. As a congressional candidate's lover, she has congress with Billy Crudup in Waking the Dead, a film produced by Jodie Foster's company and due out next spring. In The Ladies Room, filmed last summer, she gets to be "the hot young thing" (her words) - a stage actress who steals the husband of a diva played by Lorraine Bracco. In Snarl Up, a Michael Winterbottom movie now shooting in England, she adopts a South London accent to portray a Brixton woman about to give birth. And she has been summoned to audition for directors such as Martin Scorsese.

But Hollywood is having trouble figuring her out. This 26-year-old actress - born and raised in Pitt Meadows, B.C., near Vancouver - blithely turns down auditions for movies like Godzilla. Does she want to be a serious actress or a star? In Budapest, Parker is a bit of both. She has a serious role in a serious film. But she also gets to walk down the aisle with Ralph Fiennes, the man who put the English in The English Patient - then unwind with him after work. "We hang out," she says. "He's just a guy. He's just a person who wants to eat good food and be with friends and be normal." The cast members, she adds, "make up a family. We all have dinners together and go dancing. It's been so much fun."

The night before her last day on set, Parker shows up for dinner at a slightly stuffy restaurant beside the Danube. She is dressed up in an unassuming way: black pants and a white lace top, which she continually rearranges around her bare shoulders. Her hair curls into a Forties coif. Her skin is pale. And with just a whisper of makeup, she risks looking plain, which makes her classical beauty all the more striking.

Scanning the menu, she passes on the caviar ("Ever since I've been here, I've been doing Russian caviar like a little starlet") and orders chicken paprika, a Hungarian standard. Parker admits to feeling a little down. That afternoon, she and Fiennes shot a poignant scene in which their characters - Hungarian Jews who have converted to Catholicism - see each other for the last time before being led to their separate deaths in the Nazi camps. By then, her character knows that her husband has been having an affair with his brother's wife.

Parker has just one line in the scene - "Do you still want to be married to me?" (He answers yes.) "It makes me so sad what happens to these people," she says. "It's one thing to sit in Canada and read the script and say, 'Oh, yes, I know about the Holocaust.' But it's a long way away, and a long time ago. And then to be here - not to be melodramatic, but sometimes I look at the Danube and think, Christ, they just locked Jews up, shot them and threw them in the river."

The actress recalls filming a scene in which the SS takes her character to the Jewish ghetto. She walked onto the set, a courtyard filled with 100 extras playing detainees. "They'd been sitting there for hours and looked totally haggard - all in black with big yellow stars," she says. "It just looked so real. I know it's only a movie. But afterwards I wept a little bit as I was walking back to my trailer, and this Hungarian girl who works in wardrobe came up to me and said, 'What's wrong? You don't like your dress?' I said, 'No, no, it's not that. I like my dress. It's just that it's so sad.' And she said, 'Why are you crying about history?' And I felt like such an asshole in a way, the North American actress who, like, has a little cry."

Parker's emotions - undercut by a savvy self-awareness - ride visibly close to the surface, which is what makes her such an intriguing presence on-screen. The first time she met Fiennes was at a screen test in London last January, and "I was very, very nervous," she recalls. "It was a serious screen test. The cinematographer was there. It was lit. There was sound. We went through hair and makeup. And I had to do an English accent - in London." Szabo filmed her with Fiennes for over an hour. It was an argument scene, and the director pushed them through it a dozen times, wanting it louder and angrier with each take, until they were both screaming.

"Then he stopped," Parker recalls. "He said, 'Wait, wait, there's a problem because the character you're playing would have had a corset on.' So he ran out and came back with this scarf and tied it around my chest, cinching it really tightly. Then he said, 'Do it again, louder!' I couldn't breathe. I immediately began to blow my voice; I felt it crack. I started coughing and said something about just getting over a cold. But all I could think was, 'Oh my God, I'm auditioning with this incredible theatre actor, and I've blown my voice in a film audition. He's going to think I'm shit.'" As it turned out, the role she was testing for went to English actress Jennifer Ehle, but Szabo was so impressed he found Parker another spot in the cast.

She grew up on what she calls "a hippie farm" with parents who owned a seafood store in rural British Columbia. She studied ballet from the age of 3 before hanging up her point shoes at 17. Discovering drama in high school, she passed up acting scholarships after graduation to spend three years at Vancouver's Gastown Actors' Studio. And after a string of TV roles, her career took off with the necrophile notoriety of Kissed. Parker says she dislikes shooting sex scenes - "There are two things you can do on film where everybody knows you're lying: love scenes and death scenes." In Kissed, however, she managed to do both in the same breath and remain strangely credible.

Parker now lives in Toronto with her partner, Matt Bissonnette, a film-maker now shooting his first feature. But she spends much of her life jetting off to auditions in Los Angeles, London - and New York City, where she read for Scorsese. A huge fan of the director, Parker was thrilled to hear he had seen Kissed and was considering her for a part in Bringing Out the Dead, a Paul Schrader script about a Hell's Kitchen paramedic played by Nicholas Cage. As the actress sat in the waiting room of his office on Park Avenue, she was unbearably anxious. "I couldn't stop moving," she recalls. "I was writhing around in this chair. And the receptionist looked at me and said in this thick Brooklyn accent, 'Honey, you're so nervous.' I said, 'I know, I just can't help it.' And she said, 'Well, baby, this is the big time.'"

A casting director ushered Parker into Scorsese's office and left her alone. She scanned the bookshelves and saw rows of tall volumes with titles like Mean Streets, Raging Bull and Goodfellas - leather-bound scripts of his films. "At that moment," says Parker, "I literally had this thought, 'I'm not going to the audition, I'm not meeting Martin Scorsese. I'm just going to steal all of these and take them home with me.'"

Then she was invited to meet the director in his private screening room. "He's really talkative and enthusiastic and he starts talking about Toronto and the Band and Robbie Robertson and shooting The Last Waltz. And I'm thinking, 'Man, you're so cool.' We talked about Neil Young and all the cool Canadians." Then after a long chat, her nerves were soothed and she did the audition, which went well.

In the end, Scorsese hired Patricia Arquette for the role. "But it was wonderful," says Parker. "If I'd gotten that part I think I would have fallen down and died because I was already so ecstatic about just having got the audition. It was so OK." Parker's blue-green eyes glow with an enthusiasm that is so unaffected - the radiance of a rising star who still appreciates the simple pleasures of being a fan.