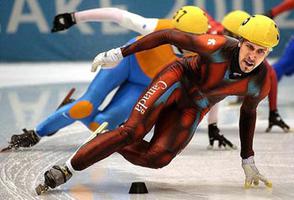 Marc Gagnon won the 500 m event in short-track speed skating event on 23 Feb 2002, the first of his two gold-medal wins at the Salt Lake Olympics that day, adding a second with teammates in the relay. Gagnon's total of five Olympic medals from 1994 to 2002 exceeded Ga\u00ebtan Boucher's record of four medals, making Gagnon Canada's most decorated male winter Olympian to that date (courtesy Canadian Press Images).

Gagnon started skating at three, began short track at five, and did both long and short track until he was 14. He grew up in Chicoutimi, a small town north of Québec City. Gagnon's older brother, Sylvain, was also a speed skater. At the 1993 World Championships in Beijing, Gagnon's first major international event, both brothers were tied in points with one race to go to determine the overall champion. In the 3000 m final, Marc out-skated Sylvain and won the title. His brother finished second. Gagnon was also overall world champion in 1994, 1996 and 1998.

Although a consistent speed skater at any distance, Gagnon preferred the two longer Olympic distances, the 1000 m and 1500 m. Of his 11 individual medals from World Championship races at Olympic distances, all but one came from distances over 1000 m. (He won a silver medal in the 500 m in 1993). He won the 1000 m and the 1500 m world titles four times. His last world title was achieved in the 1500 m race at the 2001 World Championships.

Gagnon was heavily favoured to win medals at both Lillehammer in 1994 and Nagano in 1998. In 1994, he won bronze in the 1000 m. At Nagano in 1998, Gagnon won a gold medal as part of Canada's relay team, but fell in the 500 m final and was disqualified in the 1000 m quarterfinals. He took the summer off after the 1998 Olympic season, his first significant break from the sport in over 20 years. After the break, Gagnon decided not to return to competition. He took a job as a computer technician for a company in Québec City. The lure of competition, however, brought him back to the sport and he began training in late 1999 with renewed vigour.

In 2002 at Salt Lake, Gagnon had some of his most successful races. He won his first Salt Lake medal, a bronze, in the men's 1500 m short track event. Gagnon initially finished in fourth place, but he was elevated to the bronze medal position after the initial winner, South Korea's Kim Dong-Sung, was disqualified. Days later, he won gold in the 500 m and gold in the 5000 m relay with teammates Jonathan Guilmette, François-Louis Tremblay and Mathieu Turcotte.

Gagnon's total of five Olympic medals from 1994 to 2002 exceeded Gaétan Boucher's record of four medals. Until Cindy Klassen surpassed this in 2006 with a total of six medals, Gagnon was the most decorated Canadian Winter Olympian of all time. He was also the first Canadian to equal track and field athlete Phil Edward’s record of five Olympic medals, which had stood since 1936. Gagnon finished his career shortly after as one of Canada's best-ever speed skaters. In 2008, he was inducted into Canada's Sports Hall of Fame.