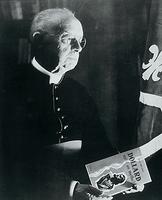 Action française, L', a monthly magazine published 1917-28 in Montréal. It was the voice of a group of priests and nationalists who comprised the Ligue des droits du français, an organization formed in 1913 to protect the French language. In 1920 Abbé Lionel GROULX became the group's leader, and in 1921 it became the Ligue d'Action française. In 1922 the magazine flirted with the idea of political independence but by 1927 had come out in favour of greater respect for the rights of the French Canadian minority within Canadian confederation. League members deplored the economic weakness of their compatriots and the growth of American investments in Québec; but, worried by the social changes wrought by industrialization and urbanization, most of them argued that agriculture was the way to promote the economic independence of French Canadians. The group published the annual Almanach de la langue française, intended for a broader public, and ran a publishing house and a bookstore.
×