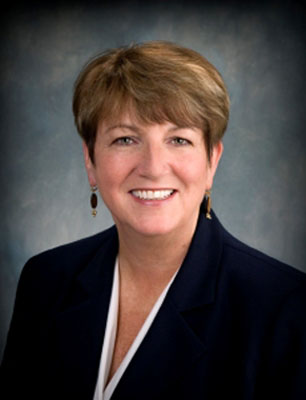 (courtesy of the Office of the Premier of Newfoundland and Labrador)

Kathy Dunderdale, community worker, politician, 10th premier of NEWFOUNDLAND AND LABRADOR, from 2010 to 2013 (born at Burin, NL, Feb 1952). Kathy Dunderdale was born and raised in Burin, NL, where she later became well known as a municipal politician. In the early 1980s she successfully lobbied Fishery Products International to change its decision about closing a plant, getting a taste of the political life. She later worked as a social worker.

After attending Memorial University, Dunderdale eventually got her start in politics on the town council in Burin, where she also became the deputy mayor.

In 2003, Dunderdale was first elected to the Newfoundland and Labrador House of Assembly as a Progressive Conservative in the riding of Virginia Waters. She was appointed to Cabinet in the same year as Minister of Innovation, Trade and Rural Development. In 2008, she became deputy premier; by this time she was also serving as Minister of Natural Resources, Minister Responsible for the Forestry and Agrifoods Agency, and Minister Responsible for the Status of Women.

"Until 1925, a woman could not even vote in Newfoundland and Labrador and today for the very first time in our province's history a woman serves as premier. Imagine that," she said upon becoming premier.

Kathy Dunderdale was officially sworn in as leader of the Progressive Conservatives in April 2011, and led her party to victory in a general election the following October. Dunderdale is the fourth woman in Canada's history to lead a provincial party to victory in an election. (Others include Alison REDFORD, Pat DUNCAN and Catherine CALLBECK).

In January 2013 Dunderdale surprised many by announcing her retirement as premier. She had presided over a relatively strong provincial economy, however, political observers said Dunderdale had failed to connect with voters, as proven by several months of polling data that put her Progressive Conservatives in third place, after the opposition Liberals and New Democrats. Her announcement came two days after the defection of one of her Conservative legislature colleagues to the Liberals.