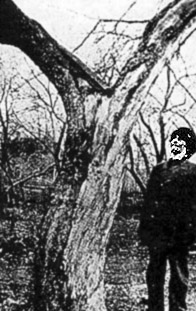 John McIntosh, farmer, apple breeder (born in the Mohawk River valley, NY 1777; died at Dundela, Canada West 1845). After a family disagreement, McIntosh immigrated to Iroquois, Upper Canada, in 1796. In 1811 he moved to the site of Dundela, where in clearing the forest he discovered about 20 apple trees in a previously cleared area. He transplanted several, one of which produced a superior fruit that he cultivated with mixed success. In 1835 his son Allan learned the art of grafting and the family began to produce the apples on a major scale. The vigorous, hardy and productive trees produced the popular dessert fruit of wide climatic and cultural tolerance, first known as "Granny" and later "McIntosh Red." The original tree lived until about 1910, bearing fruit for over 90 years until 1908.