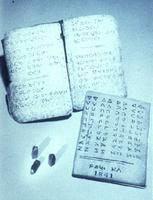 Serving in various Christian missions in Upper Canada, James Evans learnt the Ojibwe language and began translating and printing various texts. In 1840, he was appointed superintendent of the British Wesleyan mission to the Hudson's Bay Company (HBC) territories and stationed at Norway House, Manitoba. He was accompanied to Norway House by two Ojibwe missionaries and linguists, Peter Jacobs and  Henry Bird Steinhauer. It was there that Evans and others established a mission at Rossville.

Historically, Evans has been credited for the Cree writing system (known also as the Cree syllabary). While he produced considerable printed material in syllabics, including hymns and portions of the New Testament, many Cree peoples have contested this story. Oral histories say that Mistanâkôwêw (also known as Calling Badger) from Stanley Mission, Saskatchewan, delivered the writing system to the Cree. (See also Cree Language and Indigenous Languages in Canada.)

James Evans’s life and work were shortened by ill health, by increasing conflict with the HBC and by his accidental shooting of a man in 1844. In 1845, HBC Governor George Simpson requested Evans's removal. The Wesleyan Society invited Evans to London to discuss this request, as well as charges of sexual misconduct with Indigenous girls. Evans died of a heart attack not long after.