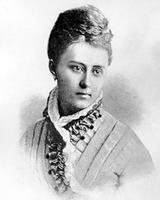 Isabella Valancy Crawford, author, poet (b at Dublin, Ire 25 Dec 1850; d at Toronto, 12 Feb 1887). The daughter of a rather unsuccessful physician, Crawford immigrated with her family to Canada (1857?) and lived in a succession of Ontario settlements before moving to Peterborough in 1869. There she began to write and publish the poems and stories that became her family's chief source of income following her father's death in 1875. To further her writing career, she moved with her family to Toronto, where they lived in a succession of boarding houses (1883-87). During this productive period she contributed numerous serialized novels and novellas to New York and Toronto publications and wrote much popular verse.

The one book of poetry published during her lifetime, Old Spookses' Pass, Malcolm's Katie, and other poems (1884), was privately printed and sold few copies, and it was only with J.W. Garvin's The Collected Poems of Isabella Valancy Crawford (1905) and Katherine Hale's Isabella Valancy Crawford (1923) that she began to be recognized as a serious writer. In the early 1970s renewed interest in Crawford resulted in the publication of forgotten manuscripts and critical articles. Her long narrative poems have received particular attention, but generally she is admired for her unique response to a distinctly Canadian landscape.