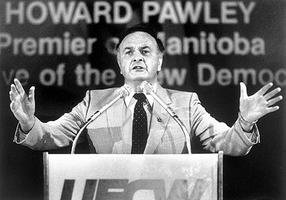 Howard Russell Pawley, politician, premier of Manitoba (born 21 November 1934 in Brampton, ON; died 30 December 2015 in Windsor, ON). Raised in a Methodist home, Pawley moved to Winnipeg at age 17 and was educated at Manitoba Teachers Coll, United Coll and Manitoba Law School. First elected as MLA for Selkirk in 1969, he was re-elected in 1973, 1977 and 1981. In Premier Edward SCHREYER's New Democratic Party administration, Pawley held the portfolios of minister of municipal affairs (1969-76) and attorney general (1973-77). After the Schreyer government's defeat, Pawley served in Opposition and was elected permanent leader of the NDP of Manitoba in Nov 1979.

Pawley led his party to victory in the Nov 1981 and March 1986 elections. The most controversial action by the Pawley government during its first term was the introduction of a resolution entrenching French language rights. Political opposition forced the government to refer the matter to the Supreme Court, which ruled in June 1985 that the province would have to translate past and future laws into French as well as English.

In order to achieve re-election, the Pawley government avoided controversial initiatives for the remainder of its first term, a cautious approach that was dropped during its second term. On the national scene, Pawley has become more prominent, questioning the erosion of federal power under the MEECH LAKE ACCORD (seeMEECH LAKE ACCORD: DOCUMENT) and the FREE TRADE agreement with the US.