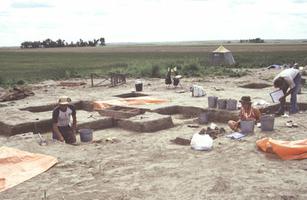 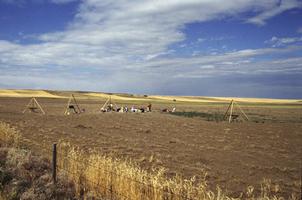 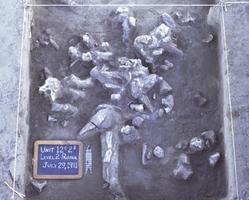 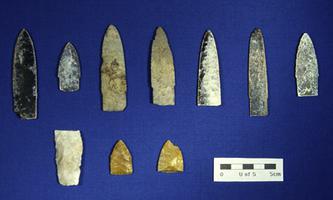 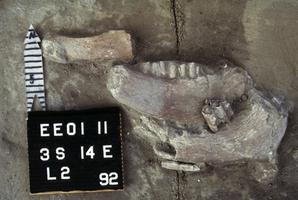 The Heron Eden site (Borden No. EeOi-11) is located in southwestern Saskatchewan, south of the town of Prelate. Ruth and Fulton Heron, local avocational archaeologists, urged archaeologists at the University of Saskatchewan to do some test excavations on it. As the site lies in a cultivated field, it was a pleasant surprise to find a substantial intact, ancient occupation layer with bone and lithic artifacts. Excavations carried out from 1989 to 1992 have yielded substantial faunal remains and a small collection of stone tools, indicating that this was a bison kill/butchery locale for a Palaeoindian cultural group whose tools are referred to as the Cody complex. This was further substantiated by the 9000 year average dates produced by radiocarbon dating.

At the end of the ice age (see glaciation), water from melting glaciers formed a lake in the region, Glacial Lake Stewart Valley. As the lake slowly dried up, it left a low-lying basin surrounded by ridges which were its shoreline. The Heron Eden site is located near the southern edge of this basin. Nine thousand years ago, when the site was occupied, there would have been remnant ponds and sloughs in this basin. One recovered birch species pollen grain indicates a more wooded and wetter environment, with a richer flora and fauna than at present. This would have made it attractive for hunting and gathering people.

The testing and excavations conducted at the site indicated that the extent of the surviving ancient soil layer, or paleosol, is about 600 m2. A total of 82 m2 units were excavated and produced substantial faunal remains, a collection of lithic specimens and a possible hearth pit. No other occupational features, such as dwellings, post molds or storage pits were found. Surface scatter in the surrounding area indicates that the original site was quite a bit larger, but time and recent cultivation has eradicated most of it.

The Lithic Collection
A relatively small number of formed tools were found. This includes 8 Scottsbluff and Eden projectile points, a hallmark of the Cody complex. These points were very finely chipped, long, thin and with straight square stems. Most probably they were spearheads used in hunting. As they have straight, sharp edges, they may also have been used as knives. There are also 6 endscrapers, a burin, a large chopping tool and 6 retouched, multi-purpose flakes.

The collection of waste specimens (the by-product of stone working) ranges from tiny chips to core fragments. Their analysis indicated that only limited primary tool making was done here. The major activities include the re-working of broken pieces, the sharpening and rejuvenation of formed tools and the occasional production of flakes.

The raw stone materials include both local sources and exotics from distant locales. Swan River chert, silicified wood, jasper and siltstones are most likely local, while Knife River flint, Beaver River sandstone and Montana agate are from further away, from the Dakotas to northern Alberta. A small piece of turquoise was a rather interesting find as the nearest source is northern Colorado. The variability of sources indicates that the site's occupants travelled extensively or were part of well-organized trading networks.

Faunal Remains
Bison comprise almost 100% of the sample. The bones are rather fragmentary, but there are complete elements and a few semi-articulated units. In total there is a minimum of 37 animals. The analysis (see zooarchaeology) indicated that both female with their calves and adult males are present. The age at death profile shows that some of the kills took place during December/January, a time when bulls would be away from the female nursing herd. Since adult male bones were also collected, it is likely that other kill events also occurred in winter, but when the males were present. Based on the size of the post cranial bones and comparisons to other collections of early Holocene age, the animals seem to belong to the extinct species Bison bison antiquus. Non-bison remains recovered include pronghorn, gray wolf and rodents (the latter are modern intrusions).

Significance of the Heron Eden Site

In summary, the Heron Eden site is a fairly well preserved Cody complex kill and processing site about 9000 year old. Small herds of bison were hunted there in the winter. Campsites may have been nearby, as artifacts have been found in adjoining areas, but no structural remains have been discovered. The Heron Eden site, together with the Niska and Napao sites, is one of the few undisturbed sites of this age in Saskatchewan.