Harriet Brooks Pitcher, physicist and nuclear scientist (born 2 July 1876 in Exeter, ON; died 17 April 1933 in Montreal, QC). Harriet Brooks made important contributions to the field of atomic physics. She discovered that one element could change into another element through radioactive decay. Brooks was the first woman to receive a master’s degree from McGill (1901). She is considered the first Canadian female nuclear physicist. Ernest Rutherford referred to her as “the most pre-eminent woman physicist in the department of radioactivity,” next to Nobel Prize-winning physicist and chemist Marie Curie.

Harriet Brooks Pitcher, physicist and nuclear scientist (born 2 July 1876 in Exeter, ON; died 17 April 1933 in Montreal, QC). Harriet Brooks made important contributions to the field of atomic physics. She discovered that one element could change into another element through radioactive decay. Brooks was the first woman to receive a master’s degree from McGill (1901). She is considered the first Canadian female nuclear physicist. Ernest Rutherford referred to her as “the most pre-eminent woman physicist in the department of radioactivity,” next to Nobel Prize-winning physicist and chemist Marie Curie. 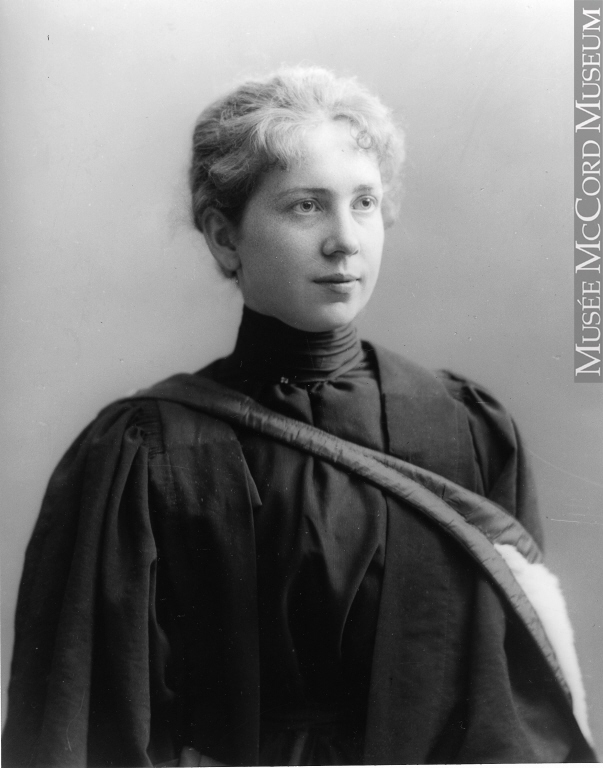 Harriet Brooks was born in Exeter, Ontario, to a family of nine children. Her father was a commercial flour salesman. She spent her childhood travelling around Quebec and Ontario with her family. She attended Seaforth Collegiate Institute in Seaforth, a small municipality in Huron East County. At this time, the $10 entrance exam fee was considered costly, but it granted access to good teachers and scientific labs.

The family settled permanently in Montreal, where Brooks enrolled at McGill University in 1894. This was only six years after the first female students graduated from the university. While completing their studies, those women were required to sit in separate classes from men. It was also only four years after the first Bachelor of Arts (BA) degree was granted to renowned cardiac specialist Maude Abbott. Abbott was refused admission to McGill’s medical school because of her gender. In 1898, Brooks graduated with a BA in Mathematics and Philosophy. Along with her BA, she was granted a teaching degree. This was common practice for female students, since they were expected to go on to become lecturers.

After completing her BA, Harriet Brooks became the first graduate student in Canada to work under Ernest Rutherford. Considered the “father of nuclear physics,” he was recruited by McGill to set up his laboratory in the new Macdonald Physics Building. Brooks’ graduate work focused on electromagnetism, where she studied the behaviour of electrons. This was an important precursor to the understanding of radioactivity, which she would pursue in her later career. In 1901, she became the first woman to receive a master’s degree from McGill. She was also the first woman in Canada to obtain a graduate degree in electromagnetism. 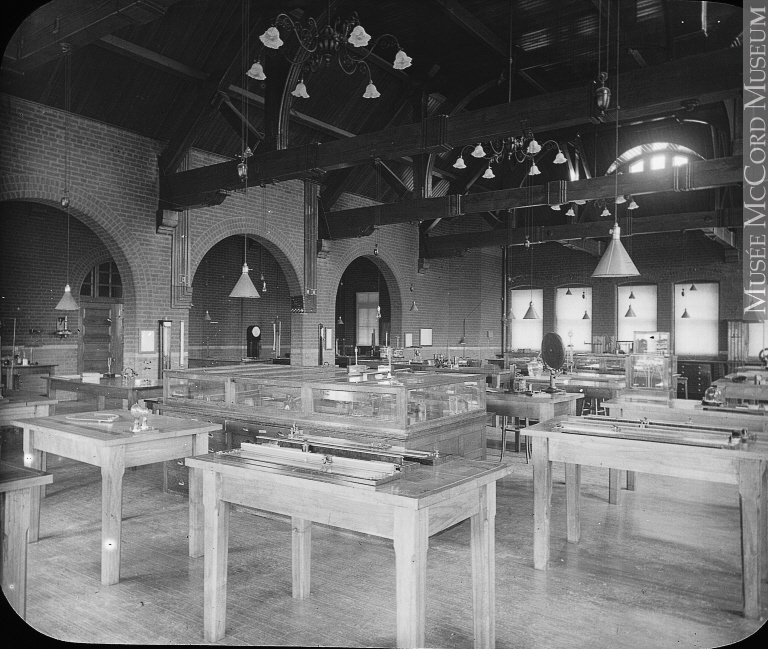 Brooks went on to pursue work toward her Doctorate of Physics between 1901 and 1903 at Bryn Mawr College in Pennsylvania. She also worked at the Cavendish Laboratory in Cambridge, England. While there, she worked with professor and former mentor of Rutherford, Joseph John Thompson. In 1903, Brooks returned to McGill to work with Rutherford again. This is where she made breakthrough discoveries in the field of radiation. She discovered that placing a non-radioactive material in a radioactive chamber caused the material to become radioactive. This discovery was an essential contribution to Rutherford’s theory of radioactivity and radioactive decay, for which he won the Nobel Prize in 1908.

Did you know?
While often discussed in the context of nuclear energy, most of the radiation we are exposed to comes from natural sources such as air and water. Radiation is the natural phenomenon of releasing charged particles from an atom. When a particle is released from radioactive material, it is thrust from the atom with enough momentum to eject the particle from the radioactive material and deposit it on another surface. This phenomenon, known as atomic recoil, was discovered by Brooks.


Brooks held several additional academic appointments during her scientific career. In 1906, she travelled to Paris to work at the Curie Institute. She worked alongside pioneering physicists, including Nobel Prize winner Marie Curie, and André Louis Debierne.

In 1904, Barnard College, the women’s college of Columbia University in New York, invited Harriet Brooks to join their staff as a physics tutor. When she announced her engagement to Bergen Davis in July 1906, the dean of the college demanded that Brooks resign from her post. In response, Brooks wrote, “It is a duty I owe to my profession and to my sex to show that a woman has the right to the practice of her profession and cannot be condemned to abandon it merely because she marries.” Although she did not marry Davis, she later left her post at Barnard.

Brooks married Frank Pitcher in London, England in 1907. They returned to Montreal, where she left academia and had three children, two of whom died in their teenage years. Brooks died on 17 April 1933 of a blood disorder. Some accounts of her illness suggest radiation poisoning, which was also the fate of Marie Curie.

Her major contributions in physics, such as the fundamentals of atomic decay, atomic recoil, radiation and understanding of the fundamental properties of the element radon, paved the way for the entire modern fields of nuclear physics and chemistry, as well as modern medical applications of nuclear medicine, including many cancer therapies. In a recommendation letter, Ernest Rutherford praised Brooks as “the most pre-eminent woman physicist in the department of radioactivity,” next to Marie Curie.

A laboratory at the Chalk River Nuclear Laboratories in Ontario is named in Brooks’ honour. In 2002, she was inducted into the Canadian Science and Engineering Hall of Fame, and in 2016 the Bank of Canada included Brooks in the list of candidates to become the first Canadian woman to be featured alone on Canadian currency. Her legacy in physics paved the way for other Canadian female physicists such as recent Nobel laureate Donna Strickland.