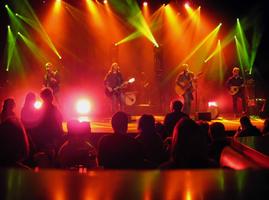 Following a series of early performances in the popular George Street club district of St John's, the group released their self-titled debut album in August of 1993. With a growing reputation for engaging live performances built on extensive touring, the independent release received gold certification. In 1995 Great Big Sea was signed to a major record deal with Warner Music Canada. The resulting albums, Up (1995), Play (1997), Turn (1999), the live album Road Rage (2000), Sea of No Cares (2002), and Something Beautiful (2004), have all been certified gold (for 50,000 albums or singles sold) or platinum (for 100,000), a rare distinction for a group specializing in traditional music. Five of these albums debuted in the Top 10 on Canadian sales charts and Sea of No Cares debuted in the No. 1 position. Rant and Roar (1998), a compilation of recordings from Up and Play, was released in the US by Sire Records. Great Big Sea has been featured in television specials on the CBC in Canada and PBS in the US, and several of the band's songs appeared in the Hollywood feature film The Shipping News. In 2003 the group released the Great Big DVD, a career-spanning compilation of concert footage, music videos and interviews.

Spirited live performances have long been a hallmark of Great Big Sea. In the tradition of the convivial Newfoundland "kitchen party," their concerts are as much communal celebrations as they are musical events. Yet there can be no denying the musical talents of the band members, whose uplifting vocals, a cappella harmonies, and driving instrumental rhythms are perhaps best appreciated in concert. The band has toured extensively throughout North America and Europe, garnering critical acclaim and large audiences in centres such as Amsterdam, Berlin, Boston, Chicago, Cleveland, Dublin, Frankfurt, Glasgow, Hamburg, London, Minneapolis, New York, Seattle, Washington, as well as virtually every major Canadian city. In 1998 the group toured the US with renowned Celtic masters The Chieftains. Their 1999 New Year's concert on the St John's waterfront drew a crowd of over 90,000 and was carried by television networks worldwide.

Great Big Sea's music has been described as "Celtic rock" or even "aggressive folk," but the essence of their style is a unique brand of pop music founded on the Newfoundland folk music tradition. (Like-minded groups of an earlier generation included folk revivalists Figgy Duff and the 1970s comedic/musical collective known as the Wonderful Grand Band.) In this sense, Great Big Sea's stylistic roots represent a radical departure from the predominantly American models that have tended to shape the mainstream currents of North American popular music. Yet remarkably, mainstream acceptance is precisely what the band has achieved for Newfoundland's folk songs, ballads, and dances, some of which were seldom heard even in Newfoundland (for example, the once obscure, now widely popular "Excursion Around the Bay" from the debut album).

Central to this process are the band's creative arrangements, which deftly mould traditional melodies and lyrics to fit the verse-chorus-hook structures of contemporary pop music. The song "Lukey," as performed on the album Up, serves as an interesting case in point. The closing line of the folk song, "Ah-ha, me boys," is adapted as a chorus by lengthening and harmonizing the melody line, while a repeating line played on the mandolin functions as a "hook" separating the verse-choruses. In other instances, disparate strands of traditional melodies are woven into a seamless texture, such as the instrumental dance medley "Dancing with Mrs White" from Up (a tribute to Newfoundland's "first lady of the accordion," Minnie White), or the similarly inspired "Chafe's Ceilidh" from Something Beautiful.

Recent recordings reveal a tendency toward experimentation in instrumental colour (such as the presence of electric and flamenco guitars, mariachi trumpet sections, and drums on Sea of No Cares). While Great Big Sea's traditional roots run deep, original songs such as "When I Am King" (Doyle) and "Love" (McCann) from Something Beautiful serve to remind listeners of their remarkable songwriting abilities and a growing willingness to explore the band's pop potential. In songs such as "French Perfume" (Hallett) from Sea of No Cares, folk-inspired lyrics and melodies blend convincingly into a contemporary idiom that is both distinctive and refreshingly natural.