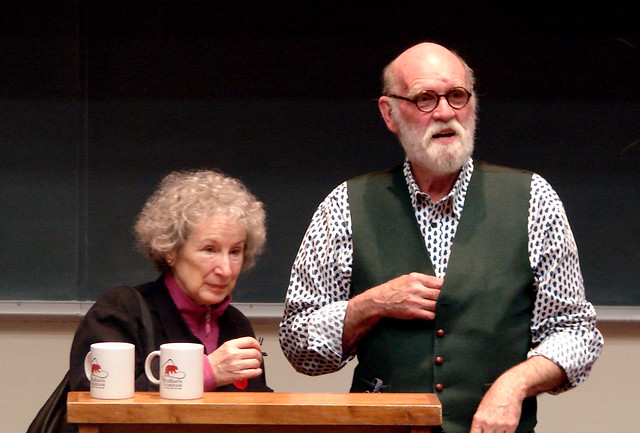 Margaret Atwood and Graeme Gibson speaking at the University of New Mexico in Albuquerque, 16 November 2009.

Graeme Gibson’s first novel, Five Legs (1969), is a complex, intertextual modernist work. It exhibits Gibson’s thematic concerns with mortality and writing as it surveys the cultural malaise of its time. A sequel, Communion, continuing the story of one of Five Legs’ characters, was published in 1971.

Gibson’s next novel, Perpetual Motion (1982), is widely regarded as his finest work. It is a critique of humanity’s drive to dominate and exploit the natural environment. Set in 19th century Ontario, the novel traces protagonist Robert Fraser’s attempt to build a perpetual motion machine by harnessing natural energy.

Gentleman Death (1993) is an ambitious, successful novel that searches for meaning in contemporary life. It is as much about writing (the occupation of the central character, also named Robert Fraser) as it is about ever-present death.

Gibson also wrote for film, radio and television and penned many travel articles. He published a book of interviews, Eleven Canadian Novelists, in 1973.

Gibson was a committed bird watcher and naturalist. He led birdwatching tours to Cuba for years and was instrumental in founding the Pelee Island Bird Observatory, for which he also served as chairman. (See also: Point Pelee National Park.) In 2005, Gibson published the bestselling, widely acclaimed The Bedside Book of Birds. The book is a collection of representations of the avian world in poetry, prose and art throughout human history. A companion volume, The Bedside Book of Beasts (2009), surveys the relationships between predators and their prey. The two collections speak to the beauty, wonder and fragility of the planet’s creatures and ecosystems. (See also: Environmental and Conservation Movements).

Gibson contributed substantially to the development of writers’ organizations in Canada. He was instrumental in forming the Writers’ Union of Canada, which he chaired from 1974 to 1975. In 1973, he began a literary resources guide and developed the Book and Periodical Development Council, which he later chaired (1975). Gibson also founded and chaired the Writers’ Development Trust in 1978 (now the Writers’ Trust of Canada). He was president of PEN Canada from 1987 to 1989.

Graeme Gibson’s literary achievements have been recognized with the Toronto Arts Award and the Harbourfront Festival Prize. He became a Member of the Order of Canada in 1992, and an honourary Fellow of the Royal Canadian Geographical Society in 2007. The Writers’ Union of Canada recognized his service to Canadian writers by establishing the Graeme Gibson Award in 1991. The award is presented “for varied and remarkable contributions to improve the circumstances of writers in Canada.” Gibson was its first recipient.

In April 2017, a feature article in the New Yorker about Gibson’s longtime partner, Margaret Atwood, revealed that Gibson had been diagnosed with early dementia.  He died at age 85 in London, England, where he was accompanying Atwood on her promotional tour for The Testaments, her sequel to The Handmaid’s Tale. “We are devastated by the loss of Graeme, our beloved father, grandfather, and spouse, but we are happy that he achieved the kind of swift exit he wanted and avoided the decline into further dementia that he feared,” Atwood said in a statement. “He had a lovely last few weeks, and he went out on a high, surrounded by love, friendship and appreciation. We are grateful for his wise, ethical, and committed life.”