During the Pleistocene epoch (from 12,000 to 2.58 million years ago) North America experienced a series of ice ages (see Glaciation). At the end of the epoch, as the ice began its final retreat, its meltwater filled a system of valleys and lowlands, eventually creating the Great Lakes. The glaciers also left behind debris such as boulders, gravel, sand and clay. As the banks of glacial debris around Lake Erie eroded they created even finer sand and gravel. Wind and waves generated lake currents that carried this fine sand and deposited it where the Point Pelee peninsula currently stands, gradually building it over time. 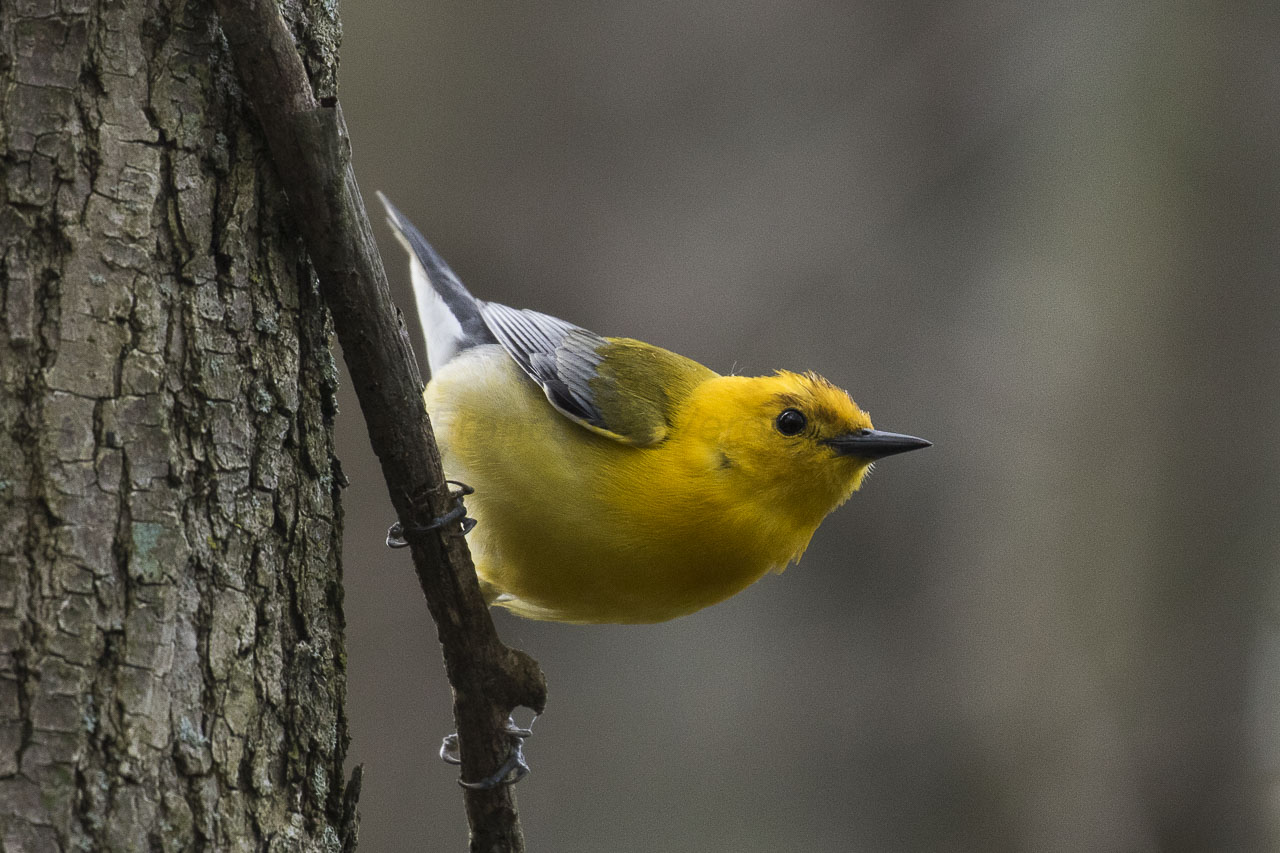 The prothonotary warbler is one of the many species of warblers seen at Point Pelee National Park during spring migration.

Over the centuries a thin but rich soil formed on Point Pelee, supporting a lush, almost jungle-like deciduous forest — referred to either as Carolinian forest or Canada’s deciduous forest region. The park is also home to one of southwestern Ontario’s largest segments of marsh, designated a RAMSAR site (a wetland of global significance).

Point Pelee is one of Canada’s most biodiverse regions. Given its southern location, the park is home to species not readily found elsewhere in the country, including trees such as the hackberry, black walnut, tulip-tree and sassafras. Vines of Virginia creeper and poison ivy wind their way through the forest, adding to its jungle-like feel.

As with flora, several species of the park’s fauna are rare elsewhere in Canada, such as the fox snake and spotted turtle. It’s also home to eastern Canada’s only lizard, the five-lined skink, as well as the southern flying squirrel.


Each spring and fall, Point Pelee National Park plays host to thousands of monarch butterflies and birds migrating to and from their winter habitats in the south. For monarchs flying south from Ontario to Mexico each fall, the Great Lakes act as a barrier in their journey, and they choose the shortest routes across the lakes as possible. Given how far Point Pelee extends into Lake Erie, the park acts as the beginning of one of these routes for many monarchs — hundreds of thousands have been seen leaving the point at a time. In late spring the offspring of these butterflies return from Mexico to Point Pelee.

Similarly, Point Pelee provides a resting point for birds migrating north or south. The peninsula acts as a stopover for two major North American migratory flyways (think of them as highways for birds). Over 390 species of birds have been recorded at Point Pelee National Park, and hundreds of thousands of birds pass through during the migration seasons. The park is particularly known as a place to see warblers — 43 out of the 52 species found in Canada have been seen at Point Pelee.

Point Pelee National Park is located on the traditional territory of the Anishinaabe, Haudenosaunee and Miami peoples. Archeological evidence indicates that First Nations had summertime settlements around Point Pelee’s marsh as early as 600 CE. The marsh’s aquatic life and wild rice provided them with food, as did the deer in the forest and the nuts from the black walnut and butternut trees (see Wild Nuts in Canada).

When Treaty 2 of the Upper Canada Treaties (also known as the McKee Purchase) was signed in 1790, Chippewa people of the Caldwell First Nation occupied Point Pelee. The treaty meant its signatories — Chippewa, Odawa, Pottawatomi and Huron-Wendat First Nations — gave up their land for money and several small reserves. However, the Caldwell Nation’s two chiefs, Quineseas and Midwayosh Caldwell, did not sign the agreement on behalf of their band. In addition to the Caldwell Nation’s ancestral right to Point Pelee, the British government had also promised them ownership of both the point and Pelee Island in recognition of their service in the War of 1812.

Despite these claims on the land, members of the Caldwell Nation were gradually pushed off Point Pelee due to increased white settlement. Because they hadn’t signed a treaty, band members didn’t have a reserve of their own, and were forced to live on the reserves of other First Nations and in non-Indigenous communities. Under the leadership of chief Moses Caldwell, the band decided to assert their claim on Point Pelee by peacefully occupying the park. On 12 June 1922, 19 families arrived and set up camp.

While the protest was unsuccessful, the Caldwell Nation continued to press their claim to the land in Point Pelee National Park. In 2010, the band and the federal government finally reached an agreement: the band would receive $105 million and the opportunity to choose reserve lands. Since then, the band has purchased several parcels of land in and around Leamington. In November 2020, the first of these parcels of land received reserve status. (See also Reserves in Ontario.)

The French were the first Europeans to explore Lake Erie in the early 1600s, among them Étienne Brûlé. They named the sand spit extending from the Lake’s northern shore “pointe pelée” meaning “bald point” for its lack of vegetation. In 1799, the British designated the southernmost part of Point Pelee a naval reserve, preserving the pine and oak trees for use as masts for their ships. The reserve’s boundaries eventually became those of the national park.

In the 1830s, several White families built homesteads at Point Pelee. They were known as “the squatters,” since they were technically trespassing on naval reserve land. These families set up small commercial fisheries, cleared land for crops, kept livestock, and hunted and trapped in the area. In 1881, the federal government allowed the squatters to buy their land, all of which eventually fell outside the boundaries of Point Pelee National Park.

In 1882, the naturalist W.E. Saunders visited the naval reserve. While the purpose of his visit was to hunt ducks, Saunders was so taken by the number of other migratory birds he saw that he founded the Great Lakes Ornithological Club. The clubhouse, known as “The Shack,” was built near the present-day location of the Visitor Centre.

In 1913, Saunders convinced Jack Miner, a prominent conservationist, to visit Point Pelee. “I was trying to look in all directions at once,” Miner later wrote of his visit in the Leamington Post, “as I saw the greatest variety of trees and shrubs that stand in any one place in Ontario.” Miner gathered other prominent men from the Leamington area and together they lobbied the federal government to turn the naval reserve into a national park. In 1918, Point Pelee National Park was officially created.

Although the park is protected, it’s vulnerable to internal and external threats. This is due to its small size, and to the fact that most of the surrounding land has been severely modified for agriculture and housing. Overuse during spring bird-watching season results in trampled vegetation. The white-tailed deer population has grown beyond the park’s carrying capacity, severely affecting the species composition of the forest. Introduced plant species are displacing native vegetation. Several species of amphibians and reptiles disappeared from the park over the 20th century. The populations of remaining species of reptiles and amphibians are largely isolated from others, a precursor to extirpation.

Visitors to Point Pelee National Park can camp, hike, swim, bird watch, canoe and kayak. A boardwalk gives access to the marshlands comprising much of the park, and a bicycle trail runs the length of the park.