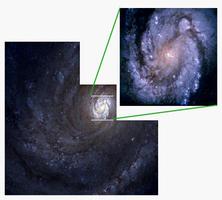 The spiral galaxy in the Virgo Cluster taken from the Hubble telescope. The upper panel shows the nucleus of M-100 in full resolution. At the left is a mosaic of 3 different views.

Stars are not distributed uniformly throughout the universe but are usually found in giant aggregations known as galaxies that are classified, according to their shapes, as spiral, elliptical or irregular. Earth's own galaxy is a large and probably typical spiral. Its most obvious component is an immense, flat rotating system of stars estimated to be about 100 000 light-years (some 1018 km) across.

Serious attempts to estimate the size of the galaxy began in the 19th century. The early pioneers failed to appreciate its true immensity, partly because they did not recognize the existence of dust and gas between the STARS, which absorb starlight on its way to Earth and prevent us from seeing the farthest reaches of our own galaxy. The application of photography to ASTRONOMY made it possible to accumulate data about apparent changes in the relative positions of stars (ie, proper motions) much more rapidly, and SPECTROSCOPY enabled astronomers to study velocities of stars along the line of sight (radial velocities). Thus, it became possible to study not only the structure of the galaxy but also its dynamics. A classic study was made by J.S. PLASKETT and J.A. PEARCE at the Dominion Astrophysical Observatory in Victoria. The results, published in 1935, gave the best available idea of the size, structure and rotation of the galaxy until the advent of radio astronomy after WWII (see OBSERVATORY). The explosive development of astronomical knowledge in the last 2 decades inevitably led to revisions. This study also helped astronomer C.S. BEALS to develop greater understanding of interstellar matter.

There are estimated to be about 100 million galaxies in the observable universe. Many are powerful emitters of radio waves and study of their emissions has increased our knowledge of the universe. Most powerful and puzzling of all are the quasars, now generally believed to be very distant extragalactic objects, the real nature of which are not yet understood. See also BLACK HOLE.