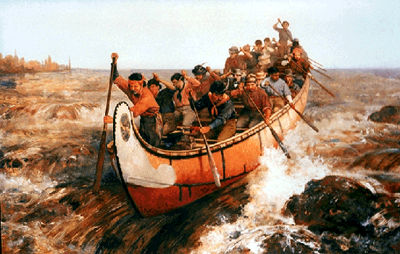 In the Atlantic region, the absence of a dominant river system resulted in only a localized traffic in furs. But the French tapped a vastly greater potential via the St. Lawrence River and its tributaries. Quebec and Montreal received furs from the Montagnais, Algonquin, Huron and Ottawa. They travelled various rivers or came down the Ottawa River from Lake Timiskaming and beyond. But most important to the later trade was the route the French developed to the west via the St. Lawrence, Ottawa and French rivers. By the 1740s, they had extended it to the head of Lake Superior and thereafter to the Prairies.

After the conquest of New France in 1760, this route was adopted by anglophone independent traders and then by the North West Company (NWC). From Kaministiquia (later Fort William), the route inland began at Grand Portage. It twisted north and west through a series of rivers and lakes marked by more than 50 tortuous portages. From Lake Winnipeg, the traders headed west via the two branches of the Saskatchewan River. Many went northwest via Methye Portage (Portage La Loche) to Lake Athabasca.

The other major route was that of the London-based Hudson’s Bay Company (HBC) through Hudson Bay. When the HBC began to move inland in 1774 with the construction of Cumberland House on the Saskatchewan River, most of its traffic inland was via the Hayes River from York Factory. In the direct competition that ensued between the HBC and other traders, the rivals paced one another westward across the Prairies. Eventually, the routes proceeded via the Howse, Athabasca and Yellowhead passes through the Rocky Mountains and down the Columbia River to the Pacific.

After 1814, HBC ships rounded Cape Horn to service Pacific posts by sea. As the more southerly trade declined, traders moved down the Mackenzie River into the western Arctic and from the East Main (east coast of Hudson Bay) inland. Access to Fort Chimo and Labrador was generally by sea. After the merger of the NWC and HBC in 1821, shipments through Montreal ceased.

Can the foundation of Canada be traced back to Indigenous trade routes? In this episode Falen and Leah take a trip across the Great Lakes, they talk corn and vampires, and discuss some big concerns currently facing Canada's water.