York Factory and the Battle of Hudson Bay 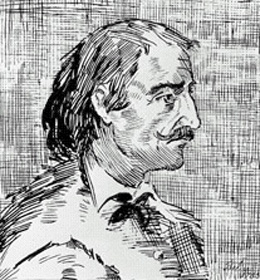 British naval officer Thomas Button, in 1612, was the first European to winter in the vicinity of York Factory. He was searching for the explorer Henry Hudson as well as the fabled Northwest Passage. The nearby Nelson River was named for one of Button’s officers who died while the ship was anchored off the river’s mouth.

In 1682, explorer Pierre-Esprit Radisson headed a French expedition in the area. The newly formed Compagnie du Nord was looking to establish a permanent fur-trading settlement in the North. After founding a fort on the south bank of the Hayes River, Radisson spent the winter skirmishing with American and British expeditions for control of the furs in the area – a campaign he eventually won. When Radisson returned to Québec, however, his furs were seized, and he was assessed a 25 per cent tax, equalling his share of the profits.

Unhappy with his treatment by authorities in New France, Radisson was then enticed to rejoin the Hudson's Bay Company, which he had earlier been allied with. Receiving stock, gifts, and the title of Chief Director of Trade at Port Nelson, Radisson returned to the Hayes River estuary in the employ of the HBC.

The first York Factory outpost was constructed in 1684 on the narrow peninsula that separated the Hayes and Nelson rivers. The location was key, as both rivers flowed from the heart of fur trading territory to the shores of Hudson Bay. 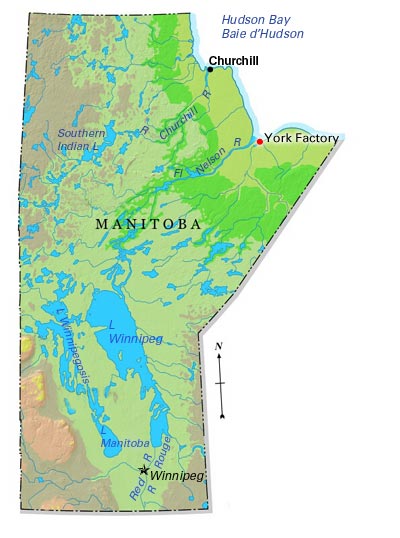 York Factory was named after the Governor of the HBC, the Duke of York. The word Factory was added to indicate that this was where the "factor" or chief trader of the area resided. Because of the shallow mud flats along the mouths of the rivers, ships could not approach close to the fort, but were required to anchor 11 km away at Five Fathom Hole. Smaller sloops transported goods to and from the ocean-bound ships.

King William’s War between England and France was declared on 17 May 1689, but open conflict in Hudson Bay preceded it by three years. Dismayed by the re-routing of valuable fur-trade commerce to HBC ships to England via Hudson Bay – totally bypassing Montréal – the Compagnie du Nord persuaded the governor of New France to mount an overland military expedition. A force of slightly more than 100 men, consisting of French soldiers and Canadian irregulars, was recruited and sent north. By the end of 1686, they had taken the HBC posts of Moose Factory, Fort Charles, and Fort Albany on the shores of James Bay. The only post that remained in HBC possession was York Factory.

In 1690, Pierre Le Moyne d’Iberville, commander-in-chief of the French Hudson Bay forces, made an attempt on York Factory, but was prevented by the presence of an English warship anchored at Five Fathom Hole.

In 1697, the conflict escalated to what historian Peter C. Newman has termed “the greatest Arctic sea battle in North American history.” France sent a fleet of warships under d’Iberville to Hudson Bay, but due to ice and fog in Hudson Strait, only d’Iberville’s flag ship Pélican actually reached the bay. The day after arriving at York Factory, d’Iberville encountered the Royal Navy warship Hampshire and two HBC armed freighters, the Dering and the Hudson’s Bay. The British had a 118 to 44 gun advantage.

The ensuing battle lasted for three hours. In the end, the Hampshire, after receiving a full broadside from the Pélican, struck a shoal and sank. The Hudson’s Bay surrendered, and the Dering fled for the safety of the Nelson River. Badly damaged, the Pélican struck a sandbar several kilometres from shore. The crew had to swim for land as their lifeboats had been shot away.

The remaining French ships arrived several days later. Using a rouse to distract the occupants of the fort, d’Iberville succeeded in landing his troops under the York Factory cannon, then coaxed a surrender from the outpost’s governor, Henry Baly. For his efforts, d’Iberville won France’s highest decoration, the Cross of Saint Louis.

York Factory remained in French possession until 1713, when the Treaty of Utrecht returned all Hudson Bay posts back to the British.

The physical location of York Factory changed several times over its history. A flash flood on the Hayes River in 1715 put the outpost under more than a metre of water. The post’s governor, James Knight, viewed the buildings to be unrepairable, and moved the site 2.5 km downstream to higher ground. A French raid in 1782, followed by another flood in 1788, destroyed much of the fort. A search went out for the highest dry promontory on which to construct a more permanent site. 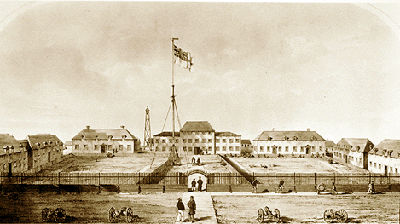 In 1853 during its heyday as the main depot of the Hudson's Bay Company, York Factory, 1853 (coloured lithograph by W. Trask, courtesy National Archives of Canada/C-16826).

By the mid-1800s, York Factory had been rebuilt into a township of 30–50 buildings, taking the shape of an H. The main depot in the centre was the most dominant structure. Other buildings included guest houses, a doctor’s house, an Anglican church, a hospital, a library, cooperage, smithy, bakehouse and residences.

Still, the post did not endear itself to all concerned. HBC clerk Robert Ballantyne described York Factory in 1846 as, “A monstrous blot on a swampy spot, with a partial view of the frozen sea.” Chief Factor James Hargrave spoke of “nine months of winter varied by three of rain and mosquitoes.”

York Factory grew in prominence after 1774, when the HBC began building fur-trading posts in the interior, to combat competition from the Montréal-based North West Company. Although the bulk of the trade soon moved inland, York Factory prospered as the administration and transportation hub, as well as HBC’s primary seaport. Trade goods for a dozen posts went inland and furs came out. In 1810, the HBC named York Factory as its headquarters for its new Northern Department.

The Hayes River had the required depth to handle the large canoes that came from the interior, making it the preferred route into what was then called Rupert’s Land. Canoes were eventually replaced by larger craft, called York boats in recognition of their final destination on the coast. York boats could handle up to six tonnes of freight.

In the end, York Factory succumbed to both the railroad and its own growth. In 1871, the railroad reached the Red River settlement in what became Manitoba. The HBC soon transferred its northern headquarters to Winnipeg, reducing York Factory to a coastal trading post. The last ship left York Factory in 1931.

The local environment, on its own, was not able to support the post and its population of Europeans, Métis and Indigenous people. Forest clearance and overhunting of local game increased the cost of operating the post, while local fur returns also became marginal. The post continued to decline until it was finally closed in 1957. Title of the property was transferred in 1968 to the federal government, which made it a National Historic Site.

All that remains today at the site is a small clearing, the large depot and a small outbuilding. The depot has survived on the permafrost because of a number of engineering innovations. The large columns and beams were joined in ways to make allowance for heaving and settling, and a series of drainage ditches were dug beneath the building to carry off surface water.

Archaeologists have uncovered the remains of earlier structures and camping areas of the visiting Aboriginal persons. However, the extreme climate and the encroaching river are relentlessly destroying the entire site.