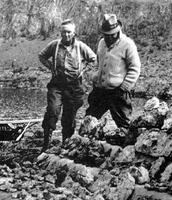 Eldorado Gold Mines Limited, later Eldorado Mining & Refining Ltd and later still Eldorado Nuclear Ltd, a uranium mining company with properties in Saskatchewan and Ontario. Eldorado began as a gold mine in Manitoba; when that failed, its owners, the LABINE brothers, took what remained of the treasury and invested it in exploration in the Subarctic around Great Bear Lake. Gilbert LaBine discovered a silver and pitchblende deposit at Port Radium (Echo Bay) in 1930; a mine was established and the product was refined into radium at Port Hope, Ont.

Eldorado did not prosper in the radium market, but it was rescued from near-bankruptcy by the sudden rise in importance of its waste product, uranium, in 1942 with the Allied drive to make an atomic bomb. Because of Eldorado's strategic importance, it was bought secretly that year by the Canadian government and nationalized in 1944. Because of the LaBines' incompetent management, they were replaced by C.D. Howe's choice as president, W.J. BENNETT, in 1947. Bennett turned the company into a wildly prosperous supplier of the US Atomic Energy Commission, and expanded its operations into Beaverlodge (URANIUM CITY), Sask, in 1948. Production there began in 1953.

Eldorado also served as compulsory marketing agent for all private Canadian uranium companies during the 1950s. With the collapse of the world uranium market in 1959, however, Eldorado knew tough times, especially since, as a Crown company, it was not allowed to be fully competitive with its private rivals. It recovered with the uranium boom of the mid- to late 1970s, but when the price of the product descended once more in the 1980s, it was obliged to close its Beaverlodge mine and concentrate on more abundant mining deposits farther south in Saskatchewan.

In Oct 1988, the federal government began to privatize the company. It created Eldor Inc to hold its 38.5% share of the company and sold the remainder to the government of Saskatchewan. The new entity, CAMECO, began to rationalize its operations and has since entered into a mine in Nebraska and a gold mining operation in Kyrgyzstan. By Feb 1995, Eldor Inc had divested itself of all interest in Cameco, though Saskatchewan retains a 30% interest in the company. The remainder is in private hands. Cameco had sales in 1994 of $348 million, assets of $1.4 billion and 1200 employees. It supplies 10% of the Western world's uranium.