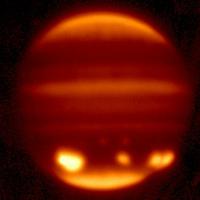 Named for Americans Carolyn and Eugene Shoemaker and Canadian David Levy, this comet came to a catastrophic end when it collided with the planet Jupiter on 20-21 July 1994.

Comet, astronomical body orbiting the SUN, which appears for a few weeks as a faint, luminous patch moving slowly, from night to night, relative to the background of stars. The comet may also have a luminous tail pointing away from the sun. In recorded history about 890 comets have been observed well enough to allow an approximate determination of their orbits. Of these comets, about 200 have short periods (3-200 years), of which some 130 have been observed more than once and have well-determined orbits, so that about 1480 cometary apparitions have been observed in all. The remaining 690 or so long-period comets have been observed only once and their orbital periods are known roughly or not at all.

Since a long-period comet is usually observed for only a small fraction of its orbital period, it is customary to represent its orbit by a parabola (an open curve). If the orbit of a comet were truly a parabola or a hyperbola, the comet would not be a permanent member of the solar system but would be passing from interstellar space. However, as far as we know, all comets that have been observed are probably solar-system objects, even if we cannot determine the periods of their orbits.

Comets are usually named after their discoverers, and in addition they have a numerical designation. Before 1995, 2 systems were in use. A comet would be represented by a year and a small letter indicating the order of discovery or recovery in the year, or a year plus Roman numeral indicating the order of perihelion passage (ie, point in the orbit nearest the sun) in that year. For example, Comet Van den Bergh, discovered by Canadian astronomer Sidney VAN DEN BERGH, was the 12th to pass through perihelion in 1974 and so was named 1974 XII. Comet Meier, discovered by Canadian astronomer Rolf MEIER, was the 17th comet to be discovered in 1980 and was named 1980q.

In 1995 this system was replaced with one in which each cometary discovery is designated by the year of discovery, followed by a capital letter indicating the half month of discovery, followed by a number indicating the order of discovery in that half month. Periodic comets are preceded with nP/, where n indicates the apparition referred to. Thus, the first comet discovered under the new system was found to have a short period of 14 years, and is designated Comet P/1995 A1 (Jedicke), named after its Canadian discoverer, Robert Jedicke.

Most comets have rather eccentric orbits, spend most of their time far from both sun and Earth and are invisible, even through large telescopes. When a comet is far from the sun, it is a small, solid object, possibly not more than a few kilometres in diameter. The solid material probably consists partly of frozen volatile substances (eg, water, simple organic compounds) mixed with small particles of nonvolatile stony or metallic dust. The description "dirty ice" is often used.

Only when a comet comes close to the sun and Earth for a brief few weeks near perihelion can the familiar spectacular phenomena usually associated with comets be seen. The volatile substances evaporate and the organic molecules break up under the influence of sunlight and glow with an eerie fluorescence. Molecular fragments have been identified by analysing the fluorescence spectrographically (see SPECTROSCOPY). Some molecular fragments were observed in comets before being observed in any terrestrial laboratory and Canadian scientists have been prominent in subsequent identifications. The cometary molecules identified in the Ottawa laboratories of the NATIONAL RESEARCH COUNCIL include: C3 by Alex DOUGLAS and H2Opl by Gerhard HERZBERG. Some of a comet's light is sunlight reflected from dust particles released when ice evaporates.

Although there is much variation in pattern, a fully developed comet typically has a head and 2 tails. The head consists of the central nucleus, the small (several-kilometre-sized) body from which gas and dust are evaporating, and the coma, the atmosphere of glowing gas surrounding the nucleus. One tail, known variously as the gas, ion or plasma tail, points directly away from the sun and consists of ionized gases being blown away from the sun. The second tail, the dust tail, is also directed away from the sun, but tends to be rather curved and is amorphous in appearance. Its spectrum (merely reflected sunlight) shows that it consists primarily of tiny solid particles. Because of geometrical circumstances, one tail is often behind the other as seen from Earth, leaving only one apparent.

Most comets are too faint to be seen with the naked eye, and not all develop tails. However, occasionally, a large comet passing close to the Earth and sun produces a spectacular sight - eg, during the 1990s the newly discovered comets Levy 1990c, Hyakutake and Hale-Bopp. The most famous comet is Comet Halley. In late 17th-century England, Dr Edmond Halley investigated the orbits of several comets and showed that the bright comets of 1531, 1607 and 1682 were one and the same, occurring at 76-year intervals. Subsequent investigations have shown that Comet Halley has been observed at every passage since 240 BC. It was last seen in 1985-86. It was visible faintly from Canada in November and December 1985; then it disappeared behind the sun while it passed perihelion in February 1986. It became a spectacular object for Southern Hemisphere observers in March and April before it was briefly and faintly seen from Canadian latitudes in May 1986. Its next perihelion passage will be in July 2061.

The years 1985 and 1986 saw enormous advances in cometary science. Not only were thousands of observations of many types made from ground-based observatories, but for the first time in history, 2 comets - Halley's Comet and Comet Giacobini-Zinner - were met by a flotilla of spacecraft taking in situ measurements and transmitting them back to Earth.

The first of these encounters was between the International Cometary Explorer spacecraft and Comet Giacobini-Zinner. ICE was originally launched in 1978 to study the flow of charged particles ("solar wind") from the sun, the interplanetary magnetic field and the nature of the Earth's geomagnetic tail. In 1981, the spacecraft was diverted to pass within 120 km of the moon's surface, where the moon's gravity was used to hurl the craft into an entirely new orbit towards Comet Giacobini-Zinner. It passed through the tail of the comet in September 1985 only 7800 km from the nucleus. The ICE confirmed theoretical models that predicted that the magnetic field would be draped over the nucleus ("like limp spaghetti hanging over a fork") with the magnetic field lines in opposite directions on either side of the nucleus and a sheet of electric current in between. The craft also verified the presence of H2Opl (see above) and COpl. An expected sharp "bow shock," where the outflow of cometary material interacts with the solar wind, was not confirmed.

Halley's Comet was met, in March 1986, by no fewer than 5 spacecraft specially launched for the event and crammed with numerous instruments for making many different sorts of measurements. Two of the craft, Vega I and Vega II, were from the USSR; 2 of them, Suisei and Sakigake, were from Japan; and Giotto was launched by the European Space Agency. The most spectacular results were probably the direct images of the nucleus of the comet obtained as Giotto passed only 540 km from the sunward side of it. It appears that the nucleus is exceedingly dark, with jets of material being ejected from highly localized active spots on the surface. Some of these jets were even detected from Earth in the remarkable accompanying image obtained by Canadian astronomers C.J. Pritchet and S. Van den Bergh with the Canada-France-Hawaii telescope in March 1986. Ejected from localized spots on the comet's nucleus, the jets are distorted into lopsided spirals by the clockwise rotation of the nucleus while they are simultaneously swept towards the left by radiation pressure issuing from the sun. If the nucleus is indeed a "dirty snowball," its surface is dirtier than we had imagined, and much of the dirt may be composed of a tarlike mixture of organic compounds.

One of the most extraordinary comets in 1000 years was Comet 1993e, discovered by one of the most successful comet-hunting teams of all time, Americans Carolyn and Eugene Shoemaker and Canadian David Levy. Its unusual elogated shape was immediately noted by the discoverers, but subsequent observations showed about 20 components in a straight line "strung out like pearls on a string." Orbital calculations showed that the comet had recently been dragged into orbit around Jupiter and had been broken up in Jupiter's gravitational field. Furthermore, all components would crash into Jupiter over a period of several days in July 1994. At that time almost every telescope in the world, not to mention the orbiting Hubble Space Telescope as well as instruments aboard the interplanetary spacecraft Galileo and Voyager 2, were trained onto Jupiter to witness the most spectacular series of impacts of a comet on a planet that has taken place in the history of astronomical endeavour.

The impacts produced huge dark spots on Jupiter, several of them larger than the Earth and easily visible in small amateur telescopes. These served as a warning to people of Earth that comets and asteroids do sometimes collide with planets. Study of the impact sites gave astronomers much new information about the physical and chemical structure of Jupiter's atmosphere, rather than about comets, but there were suprises, too, for cometary spectroscopists. For example, the spectroscopic nature of water was unexpectedly weak, raising questions as to whether this comet was typical in its chemistry or whether our ideas of the makeup of comets are in error.