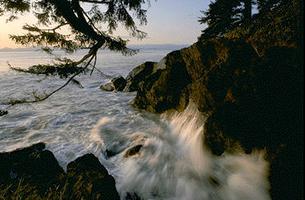 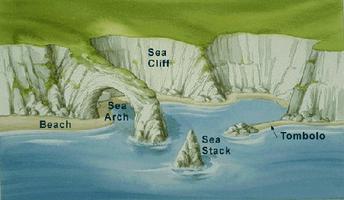 Coastal landforms are caused by the action of the sea (artwork by Michael Lee).

High cliffs are typical of the coastal landforms around Hornby Island, BC (photo by James Marsh). 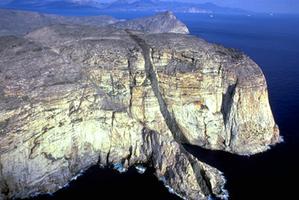 Canada's mainland coast, including the islands of Newfoundland, Cape Breton and Prince Edward Island, is 71 261 km long and fronts on the North Pacific, Arctic and North Atlantic oceans. If all measurable islands are included, the saltwater coastline has been measured at 243 797 km long. There is an additional 3800 km of freshwater coastline along the Great Lakes. Off Canada's coastline are its COASTAL WATERS extending seaward for 370 km.

The character of any coastline depends on a combination of factors, including topography, geology, availability of sediment, the prevailing processes of wind, wave, sea ice and tidal conditions, and longer term factors such as GLACIATION and changes in relative sea level. For example, deep, steep-walled FJORDS, characteristic of mountain coasts that are glaciated or have recently been glaciated, occur in British Columbia, Québec, Newfoundland and Labrador, and Nunavut. Steep topography and hard rock restrict the formation of depositional coastal landforms to river DELTAS at the fjord heads where rivers transport large volumes of sediment to the coast. In contrast, in New Brunswick and Prince Edward Island the gentler coastal gradient allows the formation of depositional landforms. Long, narrow spits and barrier beaches often cross the mouths of estuaries.

The fundamental coastal landforms are the beach and salt marsh, depositional features, and the cliff, an erosional feature.

Beach
A beach is an accumulation of wave-worked sediments above and below the waterline along the shore. Dynamically, it consists of 3 shore-parallel zones: backshore, only rarely affected by waves; foreshore (beachface), continually subject to wave swash and backwash; and nearshore (shoreface), the shallow, subaqueous zone, where waves rework and move substantial quantities of sediment on the bottom. The backshore extends to the landward limit of wave and tidal processes. The foreshore on some tidal beaches may be hundreds of metres wide; the nearshore zone commonly extends offshore to depths exceeding 10 m.

The overall profile of a beach depends on the size of the constituent material, but variations in wave conditions (daily and seasonal) may result in considerable short-term changes. Gravel and cobble beaches are usually steep; sand beaches are flatter and often exhibit a series of intertidal ridges or subtidal bars. Beaches backed by lagoons, ponds and estuaries are called coastal barriers, which include spits, barrier beaches, barrier islands, tombolos and some forelands. Beaches range from short pocket beaches contained between rock headlands to continuous beaches many kilometres long.

A coastal cliff is a steep, often vertical face produced by wave EROSION of solid rock. The term "bluff" is often used for similar features developed in poorly consolidated materials (eg, Scarborough Bluffs on Lake Ontario). Geological factors, such as rock composition, bedding and jointing are important controls on the rate of erosion and the form of cliff, sea stacks and arches (eg, Hopewell ROCKS, NB). The cliff base is frequently undercut by wave quarrying and abrasion, and may be fretted by caves. Weathering and slope failure are effective processes on the upper coastal slopes. The type of shore platform that develops is primarily a function of tidal range. Intertidal shore platforms are developed as the cliffline retreats, and are continually lowered by a combination of abrasion and rock weathering. Sediment eroded from cliffs and bluffs is recycled and used in the building of nearby beaches, marshes and marine habitats. The accumulation of debris at the base of a cliff also protects the cliff face from marine processes and reduces its rate of retreat until the accumulated debris is removed.

Sand Dunes
Coastal sand dunes only develop where suitably strong winds, an abundant supply of sand and a place to accumulate exist (see AEOLIAN LANDFORM). Wind and waves carry sand up onto the foreshore where it collects behind rocks, flotsam and clumps of SEAWEED. The gradual buildup of sand that forms a dune would be blown away if it were not for vegetation such as marram grass whose roots and rhizomes form a net to hold the sand in place. Shores with large sand dunes include SABLE ISLAND, Gulf of ST LAWRENCE, western Nova Scotia and Newfoundland and Labrador, and parts of the Great Lakes.

A coastline is continually changing due to the short-term, readily observable effects of erosion and deposition, and in the longer term in response to changes in the relative levels of land and sea.

The most important coastal processes are associated with water motions in the nearshore environment caused by TIDES and wind-generated waves. Sea ice interaction with the shoreline also can be locally important. The energy contained in breaking waves can erode the strongest rocks, and the speed of wave-induced, longshore ocean currents in the nearshore zone can transport large quantities of sand along the shore. Tides cause a periodic, usually semidiurnal variation in sea level, thereby influencing the width of the zone in which wave processes are effective. Tidal currents transport mud in suspension and, at narrow inlets and in areas with large tidal ranges, attain sufficient velocities to transport large quantities of sand. The headward reaches of the Bay of FUNDY, with the largest tidal range in the world, are dominated by tidal processes as exemplified in the extensive intertidal sands of the MINAS BASIN.

Sea Ice
SEA ICE can be an important factor along shorelines in the Arctic, the sub-Arctic, the Great Lakes and most of Atlantic Canada. The presence of sea ice can protect the shores from wave and tidal processes in winter. Some shores may contain features produced by ice scour, ice push, and ice rafting and piling as sea ice is forced onshore. The largest coastal landforms built by sea ice are some barrier islands and a shore ridge that fringes PRINCE PATRICK and Brock Islands along the Arctic Ocean coastline and boulder barricades observed along the seaward edge of tidal flats of eastern Nunavut, Newfoundland and Labrador, and Québec.

Sea Level
Sea level is the plane on which waves, tides and sea ice strike the coast. The level of the sea relative to land varies with time because of a number of factors including the volume of water in the oceans (eustatic changes); changes in the extent of ice and snow on Earth's surface (glacio-eustatic changes); upward or downward movements of coastal land caused by earthquakes or the loading or unloading of material (eg, water, ice, sediment); local variations in tidal range; and storm surges.

In the last 2 million years, major fluctuations in world sea level have occurred as immense volumes of water were alternately stored in and released from the continental ice sheets during the Pleistocene glaciations. Coastline positions in the world underwent dramatic shifts because of these changes, the last of which occurred 18 000-5000 years ago.

Large volumes of ice that accumulated on the continents during periods of glaciation lowered the world sea level and depressed the land beneath the ice. With glacial retreat and release of the weight, rock material in and under Earth's crust adjusted to the decrease in gravitational stress (isostatic rebound). Coastal areas, initially inundated by the rapid rise of sea level during deglaciation, rebounded and beaches and other shoreline features were progressively elevated above the reach of marine action. Much of Canada's coastline was affected. Raised or emerged shorelines were best developed in the Hudson Bay Lowlands and QUEEN ELIZABETH ISLANDS, where coastal evolution over the last 7000 years has been dominated by isostatic uplift. Staircases of beaches, rock terraces and cliffs occur onshore marking the levels of former shorelines.

In contrast, the eastern and western coasts of Canada are presently experiencing rising sea levels mainly because of crustal subsidence. In Atlantic Canada, the sea level began rising about 9000 years ago, forcing shorelines to migrate landward. Where there is insufficient sediment to enable a beach to adjust upward or seaward, during rising sea levels, it is eroded or submerged. The eroded material is transferred to the backshore by waves washing over the beach where new beaches are built on top of older lower beach ridges previously built at lower sea levels. Sediment can also be transported landward through inlets, where it accumulates in lagoons. Where abundant sediment is supplied to coves and embayments, beaches can build seaward despite rising sea levels.

In the Great Lakes, wetlands and the stability of coastal landforms are impacted by the rise and fall of lake levels, which include short-term climatic, seasonal and multi-year fluctuations, (eg, low water levels existed in the 1960s and late 1990s and high water levels occurred in the early 1970s and mid-1980s).

Sea level rise is expected to accelerate this century because of GLOBAL WARMING and the resulting thermal expansion of the oceans and the melting of ice caps. The impacts of this sea level rise will vary in Canada because of regional differences in crustal response and present sea level changes.