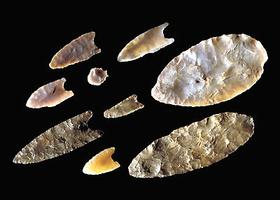 Artifacts from the Debert site in Nova Scotia. Among the many stone implements are distinctive fluted, lanceolate spearpoints of a type typical of the Clovis Big-Game Hunting tradition (courtesy Canadian Museum of Civilization).

The Clovis, also known as Llano, culture (Palaeoindian) was widely distributed throughout a large part of prehistoric North America, though its duration was fairly short (9500-9000 BCE). Major archaeological sites are located south of a line stretching from Arizona to Nova Scotia, the most famous of which include Lehner and Naco in Arizona, Blackwater Draw and Clovis in New Mexico, and Debert in Nova Scotia. The culture is characterized by a fluted or grooved lanceolate projectile point or knife called Clovis Fluted by archaeologists. Fluting was produced by removing long flakes from the flat surfaces along the complete length of the implement. The accompanying complex of stone tools included a variety of blades, burins, scrapers, knives and drills.

These big-game hunters sought mammoths, mastodons, camels and horses that were native to North America at the time. Following the retreat of the Wisconsin glaciers, these animals became extinct, hastening the end of this stage of North American Prehistory.