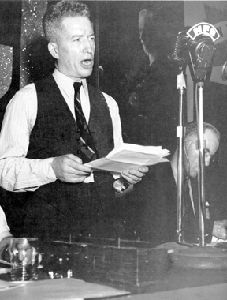 In 1940 when the Candian Congress of Labour was founded, Conroy became its vice-president and the next year its full-time secretary-treasurer.

Canadian Congress of Labour, founded fall 1940 as a merger of the All-Canadian Congress of Labour and the Canadian section of the Congress of Industrial Organizations. For 16 years the CCL was in the forefront of Canadian union activity and organization. From an initial membership of some 77 000, it had enrolled some 360 000 workers by 1956, when it joined with the Trades and Labor Congress to form the Canadian Labour Congress. Its affiliates included the international Industrial Unions in Canada: packinghouse workers, steelworkers, woodworkers, autoworkers, clothing workers, miners, electrical workers, and the mine, mill and smelter workers, as well as several large national unions led by the Canadian Brotherhood of Railway Employees. The president of this latter union, Aaron Mosher, also headed the CCL though the real power lay with secretary-treasurer Pat Conroy, a strong nationalist who resigned in 1951 in a dispute with some of the international union leaders.

The CCL was more aggressive than its Craft Union counterpart, the TLC, and organized thousands of unskilled workers whom most labour experts thought were unorganizable. In 1945 the CCL officially allied itself with the CCF and many of its leaders ran in provincial or federal elections. As well, following WWII, the congress took the lead in expelling influential communist-dominated unions from its ranks. As the voice of Canadian industrial unionism, the CCL played an important role in national political and economic affairs.