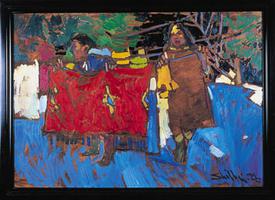 Arthur Shilling, artist (b at Rama IR, Orillia, Ont 19 Apr 1941; d there 4 Mar 1986). The son of Ojibwa parents, Shilling attended the Mohawk Institute Residential School (Brantford, Ont) and the Ontario College of Art. He won national acclaim at his first solo show in Ottawa in 1967. Using oil on canvas, he depicted life on the Rama Reserve, where he built an art gallery to encourage local talent. His specialty was portraits in a broad impressionist style.

In May 1983 Shilling was one of 7 Canadian artists invited by Governor General Edward Schreyer to show at Rideau Hall, Ottawa. His paintings are in many corporate and private collections throughout North America. His life is documented in the film The Beauty of My People (NFB, 1978). Shilling's book The Ojibway Dream (1986) was published posthumously by Tundra Press, Montréal.