This article was originally published in Maclean’s magazine on July 31, 2000. Partner content is not updated.

This article was originally published in Maclean’s magazine on July 31, 2000. Partner content is not updated. 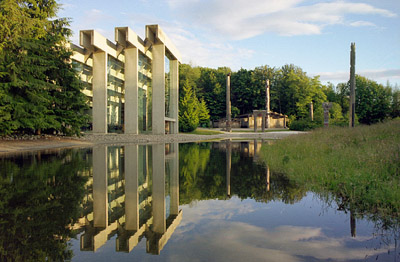 Arthur Erickson, the grand old man of Canadian architecture, is conducting a tour of his latest project, a 10-storey hotel in downtown Vancouver. The building boasts many of Erickson's signatures: a waterfall in the courtyard, rooms filled with incandescent natural light, reinforced concrete and glass, a garden facing south. Erickson is pleased with his work. "This is his baby," says builder Mike Pratas, who supervised the construction and is accompanying the architect on the tour. Erickson, at 76 still a man of patrician and handsome bearing, opens a heavy door that leads into the hotel ballroom. "We had to design this building almost to the standards of a prison," he says. "The hardware has to be tamperproof." With reason. This is no ordinary hotel: it is a flophouse, a refuge for some of the most unfortunate characters in Vancouver's drug-riddled Downtown Eastside.

It is startling to consider that the man who befriended Pierre Trudeau and Shirley MacLaine, who dined with royalty and designed some of the most celebrated public buildings in North America - Simon Fraser University, the Vancouver Court House, the Canadian Embassy in Washington - would be crafting a home for paupers suffering from mental illness and diseases such as tuberculosis, AIDS and hepatitis C. But Erickson, who in 1986 became the only Canadian to win the coveted American Institute of Architects Gold Medal, does not think it strange. "When I was asked, 'Would you consider doing a hostel for prostitutes and drug addicts?' I said, 'Yes'," he explains. "I'm always curious about how other people lead their lives."

In a sense, the $7-million hostel, which will replace the seedy Portland Hotel just around the corner, has become a metaphor for Erickson's own career. Like the Portland residents, Erickson has suffered the humiliation of being down at the heels, publicly embarrassed by bankruptcy and the loss of his own home. And like the elegant new Portland, which aims to better the lives of local mendicants, Erickson's career is slowly being rejuvenated. He is busy designing houses and public buildings. "I've always been lucky," says the courtly architect who takes a contemplative approach to life. "I'm never concerned about personal tragedy because something positive always seems to happen."

The Portland project landed in his lap four years ago. The hotel, a sorry-looking century-old building on Carrall Street, is run by the Portland Hotel Society, which relies on public funding and donations. It was one of the society's three young directors, Liz Evans, who thought of Erickson and another, Mark Townsend, who mustered up the nerve to call the office where Erickson shares space with Nick Milkovich Architects. "I said to him, 'You have a controversial reputation and you're the best at what you do - we are dealing with people who are seen as undeserving and we think it would be wonderful if a great Canadian architect could do something for them,' " recalls Townsend. After seeing photographs of some of the Portland's residents, Erickson agreed with alacrity. "People always think Arthur is too busy, that he is working in Kuwait or China," says Milkovich, who also worked on the building. "But the people at the Portland Hotel proved that wrong. They just phoned up."

It was perhaps his own experience being "homeless" that drew Erickson to the philanthropic project. In the early 1990s, as he closed offices in Toronto and Los Angeles and reorganized his business in Vancouver, Erickson was also forced to give up his house in Bel-Air, Calif. The house in Vancouver - a converted garage with a remarkable natural garden in residential West Point Grey - went on the block, too. Erickson had bought it for a mere $11,000 in 1957; in 1992, it was assessed at roughly $450,000. But he owed $3.5-million against it, with National Trust, Paul Desmarais's Power Corp., and a group of benefactors, including Galen Weston and Conrad Black, holding the mortgages. (The lenders eventually wrote some of it off, leaving the property with $850,000 in debts.) Avaricious developers eyeing the property wanted to bulldoze Erickson's water-lily ponds, throw out the decorative travertine, and use the double-sized lot to build two modern homes.

A neighbour, landscape architect Elizabeth Watts, was outraged. "I was absolutely floored that Arthur's home was being sold as a development property," she says. Inspired by the efforts in Chicago to preserve Frank Lloyd Wright's domestic architecture, Watts enlisted help from Montreal architectural doyenne Phyllis Lambert and formed a grassroots group to raise money to buy the Erickson home. "Our big difficulty was that the details of his messy business operations and bankruptcy were quite well known among Canada's corporate elite," says Watts.

But she and her group persevered. Today, the Arthur Erickson House & Garden Foundation is the caretaker of the property, which is still encumbered with a mortgage of about $500,000. Erickson now rents his former home and graciously allows tour groups - for $10 a head - to traipse through the garden. It is the least he can do. "I was very fortunate," he says, "that someone came to the rescue."

Maintaining his practice as an architect has not been easy over the past decade. Simon Fraser University, the project that brought Erickson his first international attention, is building a residential village without employing him as principal architect. "I am very discouraged about not being involved in the rehabilitation of some of my seminal buildings," Erickson says. "You would normally go back to the original architect." When Vancouver city council decided to build a splendid central library in the early 1990s, he was eliminated early in the selection process. Erickson - seen as a profligate spender - was out of favour with local politicians, says his former student, colleague and head of the library building committee, architect Bing Thom. (Montreal architect Moshe Safdie got the nod, instead.) "Erickson is one of Canada's national treasures," says Thom, noting that his was just one of many votes. "Vancouver has been very unfair to him."

Despite the disappointments, Erickson has soldiered on, designing The Museum of Glass in Tacoma, Wash., million-dollar homes in Canada and the United States and creating a residential area for the city of Chongqing, China. He is also busy writing his memoirs, recalling his travels to Tibet with Trudeau, his meetings with Prince Charles and Diana, Princess of Wales, and his architectural coups. Above all, he hopes the residents of the new Portland Hotel, which opens this month, will appreciate its modernity, spaciousness - and light. "I am anxious to see what their response will be," he says. "These are people used to dark corners to hide and I am putting them in a highly illuminated place."

No matter what, Erickson says he is keen to work again with the Portland Hotel Society to create homes for the disadvantaged. The society is eager to re-employ him, too. "We were incredibly lucky to get him," says Townsend. "Now, we're spoiled. We're going to have trouble working with any other architect." Told of Townsend's comments, Erickson beams. Someone out there still appreciates his artistry.