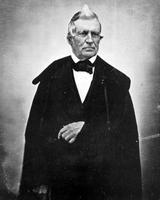 Amnesty Act, 1 February 1849, offered a pardon to all those involved in the 1837-38 Rebellions. It originated March 1838, when a conditional pardon was extended to minor participants. In 1843, with Colonial Office authority, Governor General Metcalfe issued a special pardon to any exiled rebels who petitioned. By early 1844 all 58 rebels who wanted to end their exile had received pardons, and in January 1845 they began returning to Canada from Australia and Bermuda. That year Louis-Joseph Papineau, in exile in France since 1839, also returned. Four years later, the Baldwin-LaFontaine ministry introduced its amnesty bill. Only William Lyon Mackenzie, the one rebel who had not been given a special pardon in 1843, returned to Canada under the Act.