Religion [Lat, religio, "respect for what is sacred"] may be defined as the relationship between human beings and their transcendent source of value. In practice it may involve various forms of communication with a higher power, such as prayers, rituals at critical stages in life, meditation or "possession" by spiritual agencies.

The first Jesuits to arrive in New France, Pierre Biard and Ennemond Massé, arrived at Port-Royal on May 22, 1611. 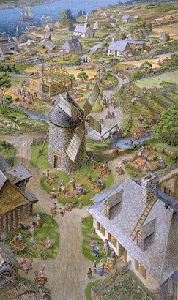 Sieur de Maisonneuve planted a cross near Mont Royal on the Feast of the Epiphany. 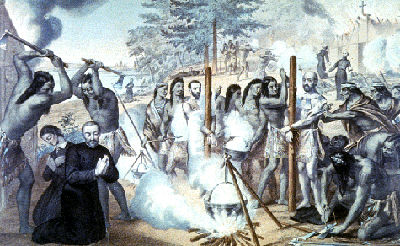 Jesuit missionaries Jean de Brébeuf and Charles Lalemant were executed by the Haudenosaunee.

Monseigneur de Laval arrived at Québec as Vicar-apostolic in New France. He became Bishop in 1674. 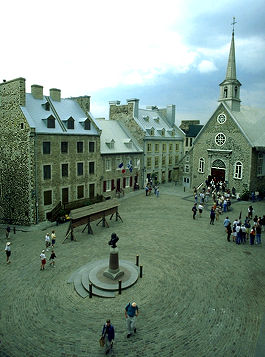 The first stone was laid for Notre-Dame-des-Victoires, the oldest surviving church in Canada, in Place Royal, Québec.

Marguerite Bourgeoys, Canada's first woman saint, died at Montréal. She was canonized in 1982.

Mére Marie-Marguerite d'Youville, who was founder of the Sisters of Charity of the Hôpital Général of Montréal and the first Canadian-born person to be beatified, was born at Varennes, Qué.

The cornerstone of Notre-Dame Cathedral in Montréal was laid; it is the oldest surviving Gothic Revival church in Canada.

Notre-Dame Church in Montréal was dedicated.

A law giving Jews legal rights was passed in the Lower Canada Assembly. By 1768, the number of Jews in Montréal had grown, and the community established Canada's first synagogue, Shearith Israel. Jews had also settled in Québec City and other parts of Lower Canada. Ezekiel Hart had been elected to the legislature of Lower Canada in 1807 but was denied his seat on the basis of his religion. 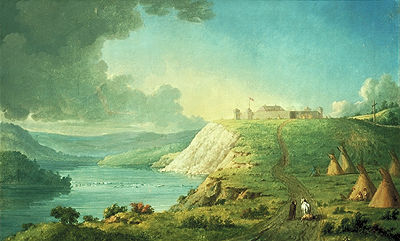 Francis Grafton and James Clexton established the first North American chapter of the YMCA in Montréal.

Founding of the Notre-Dame-des-Neiges Cemetery

The Notre-Dame-des-Neiges cemetery was established on Mount Royal for Montreal’s francophone Catholic community. As of 2021, it was the largest cemetery in Canada.

Montreal’s first Jewish cemetery — Shearith Israel — was established on Mount Royal. It was followed in 1863 by Shaar Hashomayim.

At a revivalist meeting at Whitechapel, London, England, William Booth formed the Salvation Army. The Army came to Canada in 1882.

The British North America Act of 1867 gave provinces authority over education with one significant exception: Section 93 of the Act protected the religious education rights of the Protestant minority in Quebec and the Roman Catholic minority in Ontario. In Quebec, a dual confessional school system, controlled by Protestants and Roman Catholics, became entrenched in law. Although Jews and members of other faiths could attend either Protestant or Catholic schools, they did not possess equal education rights.

Rome surrendered to the Italian troops who wanted to bring about Italian unification. Canadian Zouaves arrived too late to take part in the battle.

An attempt to bury Joseph Guibord in the Roman Catholic cemetery at Montréal failed. After the burial was accomplished under armed guard, Bishop Bourget deconsecrated the plot of ground where Guibord's body lay.

Missionary George McDougall was lost in a prairie blizzard during a buffalo hunt and froze to death. 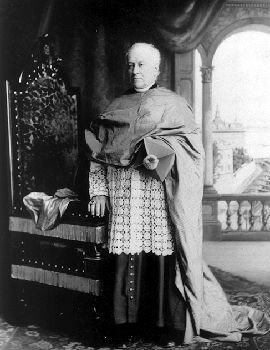 The Jesuits' Estates Act was passed by the Québec legislature, authorizing payment of $400 000 for property confiscated from the Jesuit Order.

After a Protestant school board refused to honour a scholarship won by Jacob Pinsler, the son of Jewish immigrants, the Pinslers sued. However, the Quebec Superior Court upheld the board’s position because only Protestants and Roman Catholics had constitutional education guarantees. Fallout from the Pinsler case led to the adoption of the Education Act in 1903. It stipulated that Jews would be considered Protestants for educational purposes, and the Protestant board would receive funding based on enrolment. Nevertheless, problems persisted and dissatisfaction on all sides increased. (See also Jewish School Question.)

The Québec legislature adopted legislation requiring Jews to pay their taxes to the Protestant schools panel and granting them education rights equal to those of Protestants. In 1928, the Privy Council ruled that the 1903 Act was ultra vires (beyond legal authority). 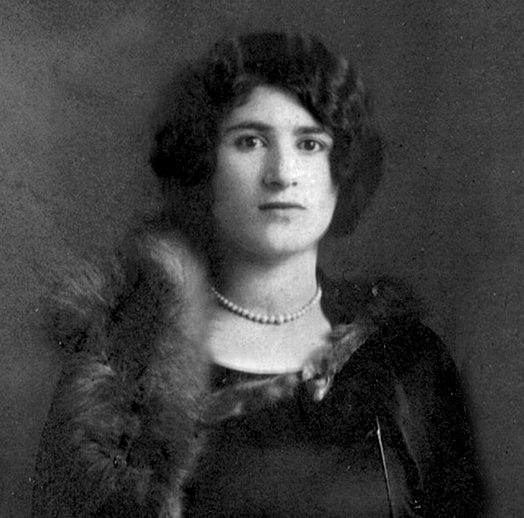 Hilwie Hamdon led the Muslim community around Edmonton in building the Al Rashid mosque — Canada’s first mosque. She was a leader in her community and inspired other Muslim women to take on leadership roles. 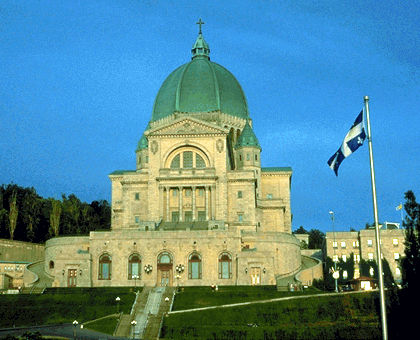 Before a crowd of 35,000, the cornerstone of the future Saint Joseph’s Oratory was laid. Located on the northwestern slope of Mount Royal in Montreal, the minor basilica is the tallest church in Canada and one of the largest domed structures in the world. The Oratory is an important landmark and symbol of Montreal and attracts about two million visitors a year.

In 1924, Quebec Premier Louis-Alexandre Taschereau established a Special Commission on Education to examine the case of Jewish students in Quebec’s public school system. After the commissioners remained at an impasse, Taschereau referred the 1903 Act to the Quebec Court of Appeal. It concluded that the Act violated section 93 of the BNA Act and was therefore invalid. Jews had no legal rights to attend Protestant schools, teach or serve as commissioners. The court also ruled that the Quebec government did not have the authority to set up separate schools. The government appealed the decision to the Supreme Court of Canada. In 1926, it upheld the appeal court rulings but concluded that the provincial government had the right to establish separate schools. In 1928, the case was referred to the Judicial Committee of the Privy Council in Britain, which agreed with the Supreme Court. (See also Jewish School Question.)

The first services of the United Church of Canada took place.

The David Bill is Enacted in Quebec

In April 1930, the Liberal government of Premier Louis-Alexandre Taschereau passed a law to create  a Jewish school board in Quebec. Under the statute, government-appointed Jewish commissioners were legally required to continue negotiations with the Protestant and Catholic school boards. However, the commissioners obtained few concessions other than an end to segregation. Discriminatory practices in hiring and religious education continued, as did taxation without representation. Opposition to the David Bill — named after Provincial Secretary Athanase David — erupted. Support within the Jewish community was split. The Roman Catholic Church denounced the Bill and French-Canadian nationalists protested. The Bill was repealed in 1931. (See also Jewish School Question.)

The eight Jesuit martyrs (including Father Brébeuf) killed by the Iroquois in the 1640s were canonized as the first North American saints.

Canada’s first mosque, Al Rashid in Edmonton, was funded through initiatives from the Arab community, led by Hilwie Hamdon. The Al Rashid Mosque has played a significant role in the growth of the Muslim community in Alberta and across the country. 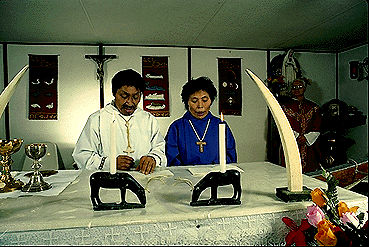 Roman Catholic churches in Canada celebrated mass in English and other vernacular languages for the first time.

Paul Déjean is Expelled from Haiti

Community leader, secular priest, anti-racism activist and political writer Paul Déjean was expelled from Haiti by the government of dictator François Duvalier. He eventually settled in Montreal, where he became of the great leaders of the entire Haitian diaspora.

Kateri Tekakwitha, a Mohawk, was the first North American Indian to be beatified. 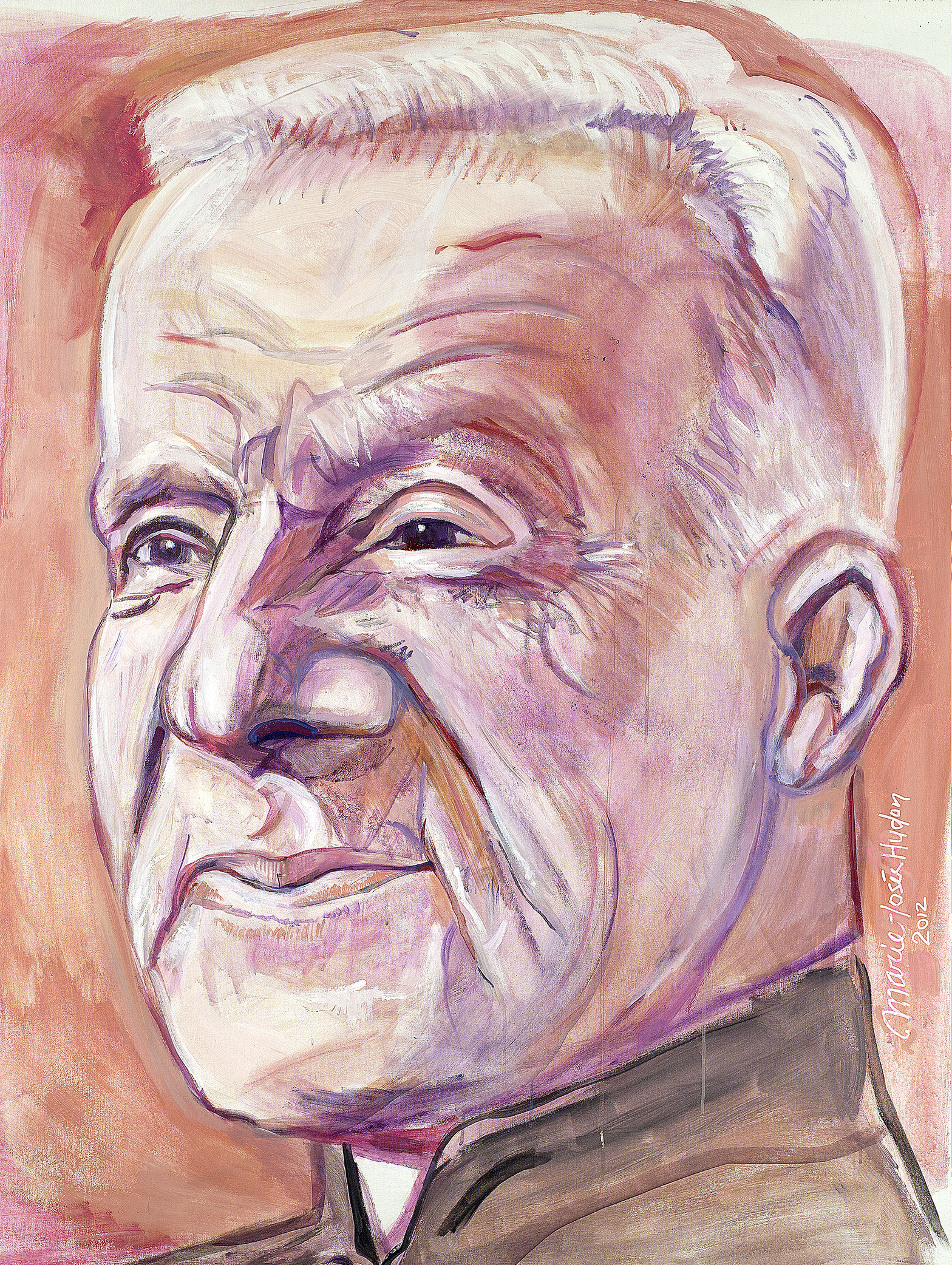 Marguerite Bourgeoys, founder of the Congrégation de Notre-Dame de Montréal, was canonized (the first Canadian woman made a saint).

The Guan Yin Buddhist Temple in Richmond, BC, was dedicated. Designed by architect Vincent Kwan, it is the most architecturally authentic Chinese imperial-style Buddhist temple in North America.

Ernst Zündel was convicted of publishing false news causing harm to racial tolerance by publishing his claims that the mass extermination of Jews in Nazi Germany never occurred. The conviction was later overturned on constitutional grounds.

The Supreme Court of Canada found that the Lord's Day Act was contrary to the freedom of religion guaranteed in the Charter of Rights.

Karl Lévêque was born in Haiti, but did his post-secondary studies in theology and became a Jesuit priest in Quebec. He fought the various forms of discrimination experienced by many members of the Haitian community in Montreal and was one of Montreal’s greatest community activists.

Fifty-three members of the religious cult, the Order of the Solar Temple, were found dead in Switzerland and Canada, apparent victims of a series of murders and suicides.

The Jewish School Question was finally resolved in 1997 when section 93 of the BNA Act was amended. This enabled the creation of religiously neutral linguistic school boards to replace confessional schools in Quebec. The transition to a secular public school system granted legal education rights to the Jewish community in Quebec after more than 100 years of inequality.

Parliament voted to amend the 1982 Constitution Act in order to allow Québec to replace its religion-based school system with one drawn along linguistic lines.

The Vatican issued a long-awaited statement apologizing for the Roman Catholic Church's failure to take action against Nazi Germany's killing of the Jews.

Québec's Roman Catholic Church refused to apologize to 3,000 orphans who claimed that they were sexually and physically abused in church-run institutions. The children had been declared mentally ill to qualify for federal subsidies.

Wilfred Cantwell Smith, the Canadian-born scholar of Islam, died in Toronto. He had established or directed centres for religious studies at McGill, Dalhousie, U of T and Harvard.

Religious Tolerance and the Kirpan

In 2001, the Supreme Court of Canada ruled that a Québec student had the right to wear a kirpan while in school. The Québec Court of Appeal struck down the decision in 2004, ruling that community safety was more important than wearing the ceremonial dagger, but in 2006 the Supreme Court again decided that religious tolerance was to be encouraged in Canadian society and that a total ban infringed on the guarantee of religious freedom under the Charter of Rights.

In an open letter to Québec newspapers, Cardinal Marc Ouellet issued an apology for errors committed by the Roman Catholic Church, asking Quebeckers to forgive the institution for its former attitudes toward anti-Semitism and racism, indifference to First Nations, and discrimination against homosexuals and women.

Vancouver-born Edna Rose Ritchings, who led the International Peace Mission Movement and was also known as Mother Divine and Sweet Angel, died at the age of 92.

Roman Catholic priest Vincent Foy, an opponent of contraception who served for the Archdiocese of Toronto for 78 years, died at the age of 101.