John William Dawson, geologist, paleontologist, principal of McGill University (born 13 October 1820 in Pictou, NS; died 19 November 1899 in Montreal, QC). Dawson conducted an archaeological survey and recovery mission that revealed evidence of pre-European habitation on the island of Montreal. Though Dawson is generally credited with discovering the “lost” village of Hochelaga, subsequent investigations revealed that he might only have found evidence of a smaller, related settlement. Dawson is well-known in the geological community for finding a fossil of Hylonomus lyelli (the earliest known reptile). He also identified Eozoön canadense as a gigantic single-celled organism, though it is now considered to be a pseudofossil (fake fossil). Dawson is generally credited as being the first Canadian scientist of international renown, and for his transformative tenure as principal of McGill.

John William Dawson, geologist, paleontologist, principal of McGill University (born 13 October 1820 in Pictou, NS; died 19 November 1899 in Montreal, QC). Dawson conducted an archaeological survey and recovery mission that revealed evidence of pre-European habitation on the island of Montreal. Though Dawson is generally credited with discovering the “lost” village of Hochelaga, subsequent investigations revealed that he might only have found evidence of a smaller, related settlement. Dawson is well-known in the geological community for finding a fossil of Hylonomus lyelli (the earliest known reptile). He also identified Eozoön canadense as a gigantic single-celled organism, though it is now considered to be a pseudofossil (fake fossil). Dawson is generally credited as being the first Canadian scientist of international renown, and for his transformative tenure as principal of McGill.

John William Dawson was fascinated by the natural world from an early age. He was encouraged by his parents to explore his environment and make collections of fossils, shells, insects and birds. Dawson was first educated by a private tutor before receiving a more formal education at Pictou Academy. Dawson left for Scotland to attend the University of Edinburgh, where he was formally trained as a geologist.

During a chance encounter in Halifax in 1841, Dawson met Sir Charles Lyell, the father of modern geology. When Lyell returned to Nova Scotia in 1842, he contacted Dawson to explore the region’s rich geological heritage. While furthering his education during the 1840s, he earned a reputation as a leading educator and scientific mind by lecturing at Pictou Academy, Dalhousie College and at a local scientific society. In 1847, Dawson married Margaret A.Y. Mercer in Edinburgh. By 1849, he had accepted a position to serve as Nova Scotia’s superintendent of education, a post he occupied from 1850 until 1853.

Though at first reluctant to take the job, John William Dawson realized the nature of the work would require him to travel to every county in Nova Scotia. This would allow him to conduct extensive geological surveys and expand his personal collections. During these years Dawson studied the Joggins fossil forests, which is now a UNESCO World Heritage site. (See UNESCO World Heritage Sites in Canada.) During an expedition with Sir Charles Lyell in 1852 to examine fossils found in cliffs, he discovered a tetrapod (four-footed animal) named Dendrerpeton acadianum in a fossil tree. Dawson would later discover Hylonomus lyelli — the oldest known reptile — which he named after his mentor. Dawson would publish his extensive fieldwork in an 1855 volume entitled Acadian Geology.

Dawson was enthusiastic about his job as superintendent of education. He was involved in nearly every aspect of the role and visited schools throughout the province. He committed himself to curriculum reform and teacher training. He even influenced the architecture of schoolhouses and the design of their desks. The Mount Hanley School, a museum and historic site, was based on Dawson’s design.

Dawson’s reputation led to an offer to join a commission to study the state of King’s College in Fredericton, which would ultimately lead to the creation of the University of New Brunswick in 1854. At the same time, Dawson had applied to be a professor of natural history at the University of Edinburgh while he was also being recruited to take the position of principal of McGill College in Montreal. Dawson accepted the job at McGill on the condition that the chair in natural history be reserved for him.

At McGill College, John William Dawson discovered an institution short on funds and students, with a meagre staff and inadequate buildings. Nonetheless, he rose to the challenge and committed himself to improving the university. For several years, he taught all courses in botany, chemistry, geology and zoology, before finding suitable experts to take over those tasks. He was also McGill’s librarian, the founder and principal of its normal school (a school for instructing teachers on how to teach) and was the director of the Redpath Museum of natural history. In addition, Dawson was also an active member of the Montreal Natural History Society.

His exhaustive work as McGill’s principal in the period between 1855 and 1893 transformed the institution from an underfunded and uninspired college into a premier research university. This allowed it to be on the forefront of major breakthroughs in medicine, physics and chemistry at the turn of the 20th century. Dawson was well-known and highly regarded by generations of McGill students. He made it a point to invite groups of students to his home for tea until every student had been included.

In 1860, workers were removing sand from a site southwest of the university campus when they discovered bones, middens (mounds of garbage), the remains of fire pits and various pieces of debris, including broken ceramics, clay pipes and objects of European origin. Given the proximity of the site to McGill College and Dawson’s reputation in Montreal society as a leading naturalist, the discovery was brought to his attention. Though he surveyed the site, conducted a partial archaeological excavation and made an inventory of his discoveries, his final reports lacked the precision expected of modern-day archeologists.

Even though the Dawson Archaeological Site was discovered by accident and was not processed in a systematic way, it may be considered the first archaeological “rescue mission” undertaken in Canada. Substantial evidence of human habitation, likely dating to the 16th century or possibly earlier, had been unexpectedly discovered.

Dawson advanced the possibility that the site may be evidence of Hochelaga: the Indigenous community visited by Jacques Cartier in 1535, but of which no traces remained when Samuel de Champlain visited in the early 17th century. Dawson was a cautious scientist and was of the mind that the site was a strong candidate until better evidence was discovered.

John William Dawson was one of the world’s leading voices against Charles Darwin’s theory of evolution. Dawson wrote hundreds of articles and two dozen books in an attempt to make his case. He was a devout Christian and was ill at ease with the theory of evolution. In 1878, Dawson was offered an opportunity to become a professor of natural history at the College of New Jersey (later Princeton University), which at the time was at the centre for academics opposed to Darwin.

Dawson refused and decided to stay in Montreal. He may have done so as he was concerned about Protestant educational rights in the majority Catholic province of Quebec. He was also convinced to stay because of a substantial gift offered to him by his friend Peter Redpath for the construction of a natural history museum on the McGill College campus. The Redpath Museum opened in 1882 and remains Montreal’s main natural history museum. 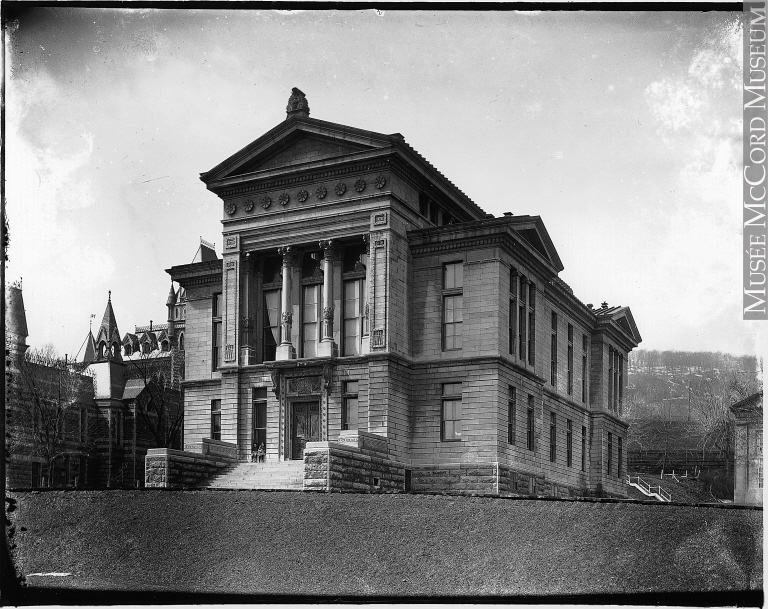 (courtesy of the McCord museum/VIEW-2605)

That same year, Dawson was named president of the American Association for the Advancement of Science. Four years later, he was appointed president of the British Association for the Advancement of Science. Dawson holds the unique distinction of having been president of both organizations, which were the world’s leading scientific associations of the late 19th century. In 1883, Dawson helped establish the Royal Society of Canada. He was knighted in 1884.

Ill health and the advice of his physician convinced Dawson to slow down in the early 1890s and eventually retire from McGill in June 1893. He continued writing, travelling, researching and lecturing. He died peacefully on 19 November 1899 after a long illness. Dawson was deeply mourned in Montreal and throughout Quebec. His passing was noted in newspapers and journals in North America and abroad.

John William Dawson’s son, George Mercer Dawson, was the director of the Geological Survey of Canada between 1895 and 1901.

The mineral dawsonite, which Dawson discovered during the expansion of the McGill Arts Building in 1862, is also named after him. 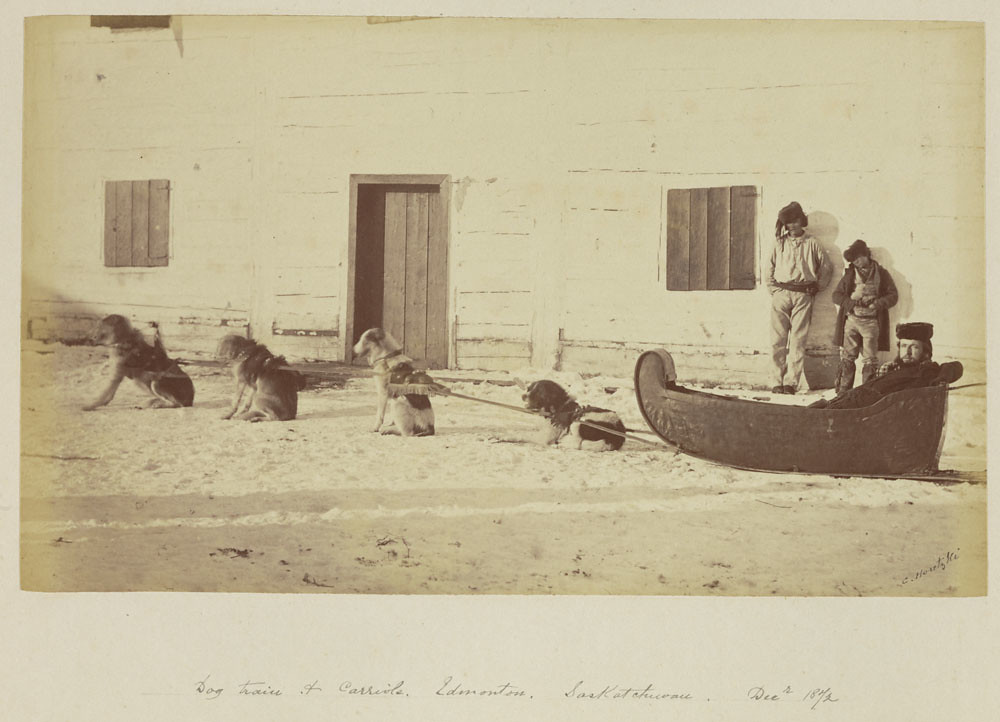