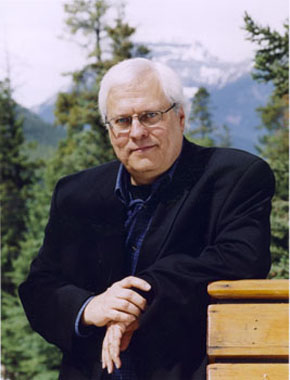 Murrell received a Bachelor of Fine Arts from Southwestern University in Georgetown, Texas, in 1968. He came to Canada in 1969 and settled permanently in Calgary in 1971. He received his teaching diploma in drama from the University of Calgary in 1972.

His first play, Haydn's Head, won a provincial competition in 1971. After Power in the Blood won the Clifford E. Lee Award in 1975, Murrell left public-school teaching and began to write full time. Also that year, he became a Canadian citizen and was appointed playwright-in-residence at Calgary’s Alberta Theatre Projects. It premiered the prairie history play A Great Noise, A Great Light (1976), about William Aberhart and the Great Depression. Alberta Theatre Projects also premiered Murrell’s most popular play with Canadian audiences, Waiting for the Parade (1977). It features five Calgary women coping alone during the Second World War.

Waiting For the Parade won the first of Murrell’s three Chalmers Awards for Best Canadian Play. It has been produced many times in Canada and abroad. His most successful play, Memoir (1977), is an exploration of actress Sarah Bernhardt’s final days. It has been translated into 15 languages and performed in 26 countries, earning Murrell an international reputation. Farther West (1982), a shocking play about a doomed sex worker’s quest for freedom, for which he also wrote the brief musical score, won the Chalmers Award. It was followed by New World (1984), a witty comedy focusing on a bizarre family reunion.

The Faraway Nearby (1995), which examines the life of American painter Georgia O’Keefe, also won a Chalmers Award. Subsequent plays reflect Murrell’s sustained interest in historical artistic figures. Democracy (1990), which chronicles a meeting between Walt Whitman and Ralph Waldo Emerson during the American Civil War, received the Canadian Authors Association’s and the Writers Guild of Alberta’s Best Play Award in 1992. October (1988) features Italian actor Elenora Duse and the legendary dancer Isadora Duncan. Death in New Orleans features three Canadians who travel to New Orleans. It was premiered by Calgary's One Yellow Rabbit Performance Theatre at Edinburgh’s Traverse Theatre during the 1998 International Festival of the Arts. The play won the Fringe First Award for outstanding new writing.


Translations and Other Activities

Murrell has also earned a national and international reputation for translating plays by Chekhov, Ibsen, Rostand, Racine, Sophocles, Cocteau and Quebec playwright Carole Fréchette into English. In 2001, he adapted Homer’s The Odyssey into a play for young audiences. It premiered at the Banff Arts Festival. Also in 2001, Murrell completed the book for Ballet British Columbia’s production of The Faerie Queen. He also continued his collaboration with choreographer John Alleyne, which culminated in the production of two new dance works, Ballet British Columbia's Orpheus in 2002 and Tristan and Isolde for the National Ballet of Canada in 2003.

In 2003, Murrell as librettist and John Estacio as composer wrote the opera Filumena. It was cocommissioned by the Banff Centre and the Calgary Opera Association. The opera, which tells the story of the last woman hanged in Canada, has been remounted in Banff, Ottawa and Edmonton.

Murrell worked as playwright-in-residence with Theatre Calgary. He was associate director of the Stratford Festival (1978–80), head of the Banff Playwrights Colony (1985–89), and head of the theatre section of the Canada Council for the Arts (1988–92). Murrell was artistic director of theatre arts at the Banff Centre (1999–2007). In 2007, he left that position to step into one created in acknowledgement of his leadership and artistic contribution to the centre: emeritus artist in residence.

In recognition of his enormous contribution to dance, theatre and music, Murrell was awarded the prestigious 2002 Walter Carsen Prize for Excellence in the Performing Arts. That same year, he was inducted into the Alberta Order of Excellence and was made an Officer of the Order of Canada.  The University of Calgary bestowed him with an honorary doctor of laws degree in 2006. In 2008, he received the Governor General’s Performing Arts Award for Lifetime Artistic Achievement. In conjunction with that prize, the National Film Board produced the animated, biographical short film The Real Place (2009).