Grassy Narrows, ON, is the common name for both a reserve and an Ojibwe First Nation. The reserve, legally known as English River Indian Reserve 21, is just over 41 km2 of land located about 55 km northeast of Kenora. There are 1,594 registered members of Grassy Narrows First Nation (also known as Asubpeeschoseewagong Netum Anishinabek), 971 of whom live on-reserve (2019). Grassy Narrows is a signatory to Treaty 3.

Approximately 90 per cent of Grassy Narrows residents suffer from mercury poisoning. The poisoning is the result of Dryden Chemicals Ltd. dumping mercury into the English-Wabigoon river system between 1962 and 1970. The effects of the pollution are ongoing, and have also affected Whitedog First Nation (also known as Wabaseemoong Independent Nations).

Grassy Narrows, ON, is the common name for both a reserve and an Ojibwe First Nation. The reserve, legally known as English River Indian Reserve 21, is just over 41 km2 of land located about 55 km northeast of Kenora. There are 1,594 registered members of Grassy Narrows First Nation (also known as Asubpeeschoseewagong Netum Anishinabek), 971 of whom live on-reserve (2019). Grassy Narrows is a signatory to Treaty 3. Approximately 90 per cent of Grassy Narrows residents suffer from mercury poisoning. The poisoning is the result of Dryden Chemicals Ltd. dumping mercury into the English-Wabigoon river system between 1962 and 1970. The effects of the pollution are ongoing, and have also affected Whitedog First Nation (also known as Wabaseemoong Independent Nations).

Ancestors of the northern Ojibwe are thought to have originally inhabited the north shore of the upper Great Lakes. They migrated northward and westward during the late 17th and early 18th centuries in search of animals to supply the fur trade. The fur trade economy transformed Ojibwe social organization and resource use. Traditionally, Ojibwe hunted large game for subsistence. The fur trade shifted this practice toward trapping smaller animals and trading their furs. In addition, large patrilineal clans divided into smaller, more mobile family groups, thought to be more effective for trapping.

In spring and summer, the original families of Grassy Narrows gathered at the Hudson’s Bay Company trading post at Lac Seul, as well as smaller outposts in the English River region. This group, led by hereditary leader Chief Sah-katch-eway, entered into treaty negotiations with the Canadian government in 1871. Chief Sah-katch-eway signed Treaty 3 on 3 October 1873. Five years later, in 1882, the federal government created two reserves for the group of Ojibwe represented by Chief Sah-katch-eway: one at Grassy Narrows, and one to the northeast, at Wabauskang (see also Reserves in Ontario).

In 1881, the Canadian Pacific Railway completed a line through Rat Portage (present-day Kenora). The railway provided transportation for the growing logging and mining industries in the Lake of the Woods region and enabled the expansion of White settlement. In 1911, the Hudson’s Bay Company established a trading post in Grassy Narrows.

In 1919, a massive influenza outbreak in Wabauskang is estimated to have killed over 1,000 people. Chief Charles Pierrot (who succeeded his father, Chief Sah-katch-eway, in 1888) relocated the remaining band members to the Grassy Narrows reserve.

In 1963, the Department of Indian Affairs relocated the people of Grassy Narrows to a new reserve, roughly 8 km to the southeast. The new site, accessible by road from Kenora, allowed the government to provide an on-reserve school, electricity, improved social services and more. The accessibility of the new site increased once-limited contact with the government and White society. It imposed a new economic order that undermined the traditional way of life for the people of Grassy Narrows.

Before the resettlement, the people of Grassy Narrows maintained seasonal patterns of migration, and participated in the regional economy as trappers, fishermen and harvesters of wild rice and berries. Access to the mainstream economy on the new reserve meant that traditional activities were no longer necessary for survival. The rapid cultural change was challenging for the community to cope with. It led to deteriorating social conditions, including an increase in violence, alcohol abuse and child neglect.

Many people from Grassy Narrows attended the McIntosh Indian Residential School, which operated from 1925 to 1969 in nearby McIntosh, Ontario. Today, Sakatcheway Anishinabe School in Grassy Narrows offers classes from junior kindergarten to grade 12.

Youth of Grassy Narrows First Nation perform a song about their connection to their home. The song was written, recorded and filmed in Grassy Narrows.

In 1962, Dryden Chemicals Ltd. began operating a chlor-alkali plant in Dryden, Ontario. Dryden is located about 130 km upstream from Grassy Narrows. The plant used mercury to manufacture chlorine, which was in turn used to bleach paper at the Dryden Paper Company Ltd. Between 1962 and 1970, the company dumped an estimated 9,000 kg of untreated mercury into the English-Wabigoon river system, upstream from Grassy Narrows and Whitedog First Nations. In 1970, the Ontario government ordered the company to stop dumping mercury into the river system. However, the ordinance only included water effluents, not air emissions. As a result, airborne mercury pollution continued until 1975, when the Dryden Chemicals Ltd. switched to a cleaner system of chlor-alkali manufacturing. The Dryden Chemicals Ltd. ceased operation in 1976.

In 1970, Ontario banned all commercial fishing in the English-Wabigoon river system. Fish in the system had been found to contain extremely high levels of mercury, as much as 10 to 50 times higher than fish in surrounding waterways. The ban was devastating for the people of Grassy Narrows, as fishing was their main source of income. While they were no longer able to sell their catch, some community members continued to eat fish from the river, as it was a staple of their diet.

In 1986, Grassy Narrows and Whitedog reached a settlement agreement with the provincial and federal governments. The settlement included the creation of a mercury disability fund and a mercury disability board, which administers funds to band members affected by the mercury contamination. A 2016 report found that more than 90 per cent of residents in Grassy Narrows and Whitedog First Nations have symptoms of mercury poisoning, including sensory disturbances, permanent impairment of speech, sight and hearing, as well as convulsions and loss of balance.

In 2017, the Ontario government committed to funding an $85-million remediation plan for the English-Wabigoon river system. In addition, the federal government committed to building mercury treatment centres in both Grassy Narrows and Whitedog First Nations. In its fall economic statement, released 30 November 2020, the federal government promised $200.1 million over five years and $300,000 ongoing to build and run the centres. 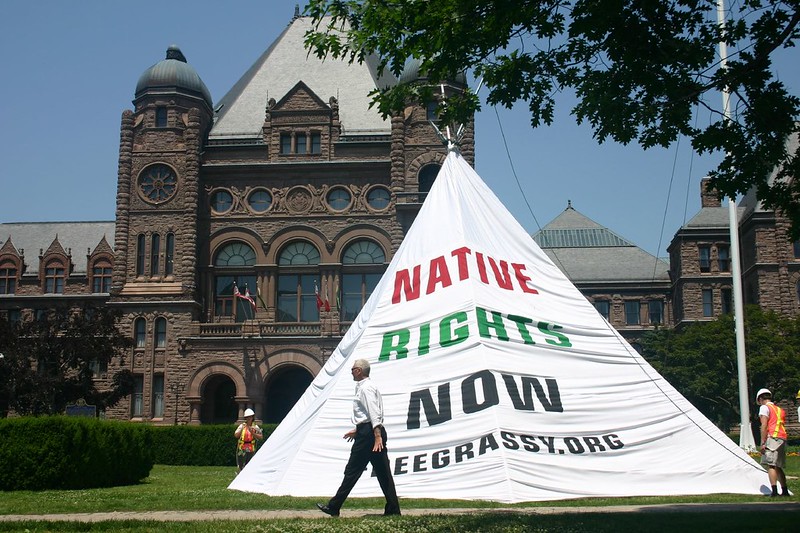 On 25 June 2007, protesters erected a 30-foot-high teepee outside the Legislative Assembly of Ontario. The protesters were fighting against clear-cutting on Grassy Narrows First Nation's territory.

Approximately two-thirds of the Whiskey Jack Forest, an area of boreal forest in northwestern Ontario, is part of Grassy Narrows’ self-identified traditional land. Grassy Narrows is the site of the longest-running First Nation logging blockade in Canadian history, which started in December 2002. Following extensive clear-cutting on their territory, band members have stopped all logging trucks from coming into the community. In 2007, the community called for a moratorium on all industrial activity taking place without their consent. Because of this pressure, there has been no harvesting in the area since Resolute Forest Products (formerly AbitibiBowater) gave up its license to the Whiskey Jack Forest in 2008.

In 2011, Ontario’s Superior Court ruled that the province cannot authorize logging operations if they infringe on Indigenous rights protected under Treaty 3. However, that ruling was overturned by the Ontario Court of Appeal in 2013. In 2014, an appeal brought to the Supreme Court of Canada was dismissed.

In 2017, the Ontario government promised no logging would take place on Grassy Narrows territory until the forest management plan governing the Whiskey Jack Forest expires in 2022. The following year, Grassy Narrows’ chief and council released the Asubpeeschoseewagong Anishinabek Aaki Declaration, declaring Indigenous sovereignty over their territory and banning all industrial logging, mining and other resource development activities on their land. Grassy Narrows leadership and scientists in Ontario are concerned that clear-cut logging will release more mercury into the environment.

Under the Indian Act electoral system, Grassy Narrows First Nation elects a council for a two-year term, consisting of one chief and four councillors (see also  Reserves in Ontario: Politics). The First Nation is also a member of the Bimose Tribal Council and the Grand Council Treaty 3. In 2019, Grassy Narrows chief Rudy Turtle ran for the federal New Democratic Party in the Kenora riding.