Martin Brian Mulroney, PC, CC, GOQ, lawyer, businessman, politician, prime minister of Canada 1984 to 1993 (born 20 March 1939 in Baie-Comeau, QC). Former Progressive Conservative Party leader Brian Mulroney helped his party win the most seats ever (211) in the 1984 election. As prime minister, he signed a landmark free trade deal with the United States and Mexico (NAFTA) and oversaw passage of the unpopular Goods and Services Tax (GST). He also spent much political capital trying unsuccessfully to persuade Quebec to sign the Constitution. (See Meech Lake Accord; Charlottetown Accord.) Mulroney took a strong stance against apartheid and made great strides in protecting the environment. But his historically low popularity led to an unprecedented defeat in 1993, which sent the Conservative Party into disarray for a decade.

Martin Brian Mulroney, PC, CC, GOQ, lawyer, businessman, politician, prime minister of Canada 1984 to 1993 (born 20 March 1939 in Baie-Comeau, QC). Former Progressive Conservative Party leader Brian Mulroney helped his party win the most seats ever (211) in the 1984 election. As prime minister, he signed a landmark free trade deal with the United States and Mexico (NAFTA) and oversaw passage of the unpopular Goods and Services Tax (GST). He also spent much political capital trying unsuccessfully to persuade Quebec to sign the Constitution. (See Meech Lake Accord; Charlottetown Accord.) Mulroney took a strong stance against apartheid and made great strides in protecting the environment. But his historically low popularity led to an unprecedented defeat in 1993, which sent the Conservative Party into disarray for a decade.

Brian Mulroney is the son of Irish immigrants. His father, an electrician, was anxious that his children escape the paper mill that dominated their small town of Baie-Comeau. (See also Resource Towns in Canada.)

Mulroney joined a major Montreal law firm (now Norton Rose Fulbright) in 1964. He soon specialized in labour negotiations for concerns such as Iron Ore Company of Canada and Power Corporation of Canada. After his father died in 1965, Mulroney took on heavy family responsibilities.

In 1974–75 Mulroney won public attention as an articulate and hard-hitting member of the Cliche Commission on violence and corruption in the construction industry in Quebec. By now, he was the leading Conservative organizer and fundraiser in the province. Despite never having run for office, he was a strong candidate for the leadership of the federal party in 1976; but he was defeated on the third ballot.

Mulroney became vice president of Iron Ore Company in 1976; as president (1977–83), he emphasized labour relations. At the end of his term, he closed the company’s operation in Schefferville, Quebec, without serious political fallout.

Mulroney again ran for the Progressive Conservative leadership in 1983; it was a low-key effort, due to charges that his 1976 campaign had been too slick and showy. He beat Joe Clark on the final ballot: 1,584 votes to 1,325.

Mulroney was elected Member of Parliament for Central Nova in 1983–84. As leader of the Opposition, he proved a skillful manager. He concentrated on healing party wounds and building a solid electoral machine. Moderate and conciliatory by nature, he called for a strengthened private sector and less government intervention in the economy. He also sought minority French-language rights, and closer Canadian-American and federal-provincial relations.

In the general election of 1984, Mulroney ran an almost flawless campaign against Prime Minister John Turner’s Liberals. (His criticism of Turner’s patronage appointments for loyalists of former prime minister Pierre Trudeau — “You had an option, sir” — is regarded as one of the most decisive blows ever in a federal leaders’ debate.) Mulroney won his home riding of Manicouagan while the PCs won 211 seats overall — the most in Canadian history.

Mulroney had always emphasized the importance of Quebec to the Conservatives. His pledge to bring Quebec into the Constitution “with honour and enthusiasm” was decisive in persuading many Quebec nationalists to support the Conservatives. The party took 58 of its seats in the province; it was the breakthrough that Mulroney had promised. He was sworn in as the 18th prime minister on 17 September 1984.

The first two years of Mulroney’s government were marked by indecision and scandals in his Cabinet. However, by the spring of 1987, he had launched the two important initiatives that would mark his first term: the negotiation of the Meech Lake Accord (see Meech Lake Accord: Document); and the conclusion of a Free Trade Agreement (FTA) with the United States, which was reached that October. The FTA became the central issue in the 1988 federal election. The Conservatives overcame a resurgent Liberal Party, around whom opposition to the FTA had coalesced. The FTA went into effect on 1 January 1989.

However, the Meech Lake Accord slowly unravelled. Its collapse in June 1990 was at least partly due to Mulroney’s widely quoted “roll of the dice” in scheduling the final first ministers conference so close to the deadline. (See also The Death of the Meech Lake Accord.)

Mulroney’s government reached a new low in popularity with the imposition of the new Goods and Services Tax (GST). It went into effect on 1 January 1991. Mulroney had to stack the Senate with supporters to get the bill through the upper house. He was widely criticized for engaging in the same kind of patronage and corrupt political favours that he had once railed against.

Critics blamed the severity of the recession in the early 1990s on the FTA. But the Conservatives continued their policy of open trade; they negotiated the North American Free Trade Agreement (NAFTA), which this time included Mexico.

In the fall of 1992, Mulroney tried to arrange yet another constitutional pact. But his popularity in the polls was lower than that of any other prime minister in history. The so-called Charlottetown Accord was pieced together after numerous commissions and negotiations. (See Charlottetown Accord: Document.) But it was rejected in a nation-wide referendum.

Apartheid and the Environment

Brian Mulroney is best known for his economic and constitutional policies. But his records in foreign affairs and the environment are also significant. In contrast to British Prime Minister Margaret Thatcher and American President Ronald Reagan, Mulroney took a strong stand against apartheid. He recommended stiff economic and diplomatic sanctions against South Africa. Shortly after Nelson Mandela was finally released from a South African prison in 1990, the anti-apartheid activist publicly thanked Canada for its support. (See Nelson Mandela: A Soft Spot for Canada.)

Mulroney also took strong measures to protect the environment. In 2006, he was voted the “greenest” prime minister in Canadian history in a survey by Corporate Knights: The Magazine for Clean Capitalism. In 1991, Mulroney negotiated the Acid Rain Accord with the United States. This air quality agreement significantly reduced acid rain levels and sulfur dioxide (SO2) emissions. (See Air Pollution.) While prime minister, he also passed the Environmental Protection Act (1988) and created eight new national parks. 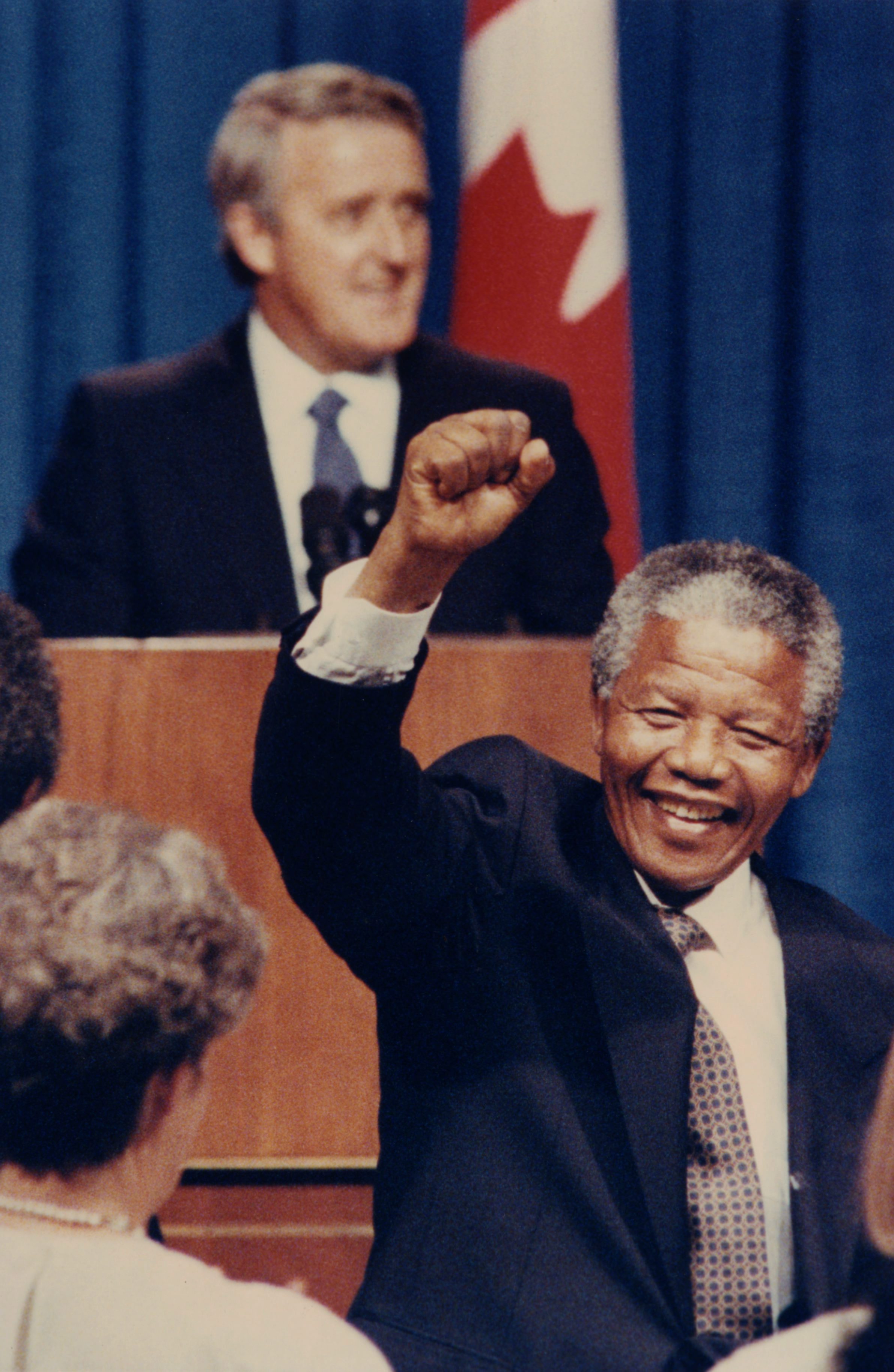 In November 1992, Mulroney’s popularity was a mere 12 per cent — the lowest of any prime minister in Canadian history. After much speculation, he announced his decision to leave politics in February 1993. He had shown great skill in uniting the traditionally fractious Conservative Party, mainly by building a coalition of Québécois and Westerners. But Mulroney’s constitutional failures; the economic problems brought on by the persistent recession; the lingering bitterness over the GST; and his personal unpopularity had made his political future and that of his party look bleak.

Mulroney turned over the office of prime minister to Kim Campbell on 25 June 1993. His Conservative coalition disintegrated in the election on 25 October 1993. Only two Conservatives were elected in all of Canada. The party lost its status as an official party in the House of Commons. Many blamed Mulroney’s failures and his personal unpopularity for the most unprecedented disaster in Canadian political history.

Brian Mulroney has been senior partner at the law firm Norton Rose Fulbright (formerly Ogilvy Renault) since 1993. In June 1997, the federal Liberal government apologized to Mulroney for the false accusations that he had committed fraud in the Airbus scandal. (See related Maclean’s articles: Mulroney Fights Back Over Airbus; Mulroney Launches Suit; Mulroney Wins an Apology.)

In 1998, Mulroney became chairman of Forbes Global Business and Finance, the English-language international edition of Forbes magazine. He was also made a Companion of the Order of Canada. Mulroney has also served as director on several corporate boards. In 2014, he was named chairman of Quebecor Inc., a Montreal-based media company.

Caroline Mulroney made an unsuccessful bid for the leadership of the Ontario Progressive Conservative Party in 2018. She was elected as the MPP for York-Simcoe that year. She has served as the minister of transportation and the minister of francophone affairs. Ben Mulroney is a TV host who gained national recognition as the host of Canadian Idol, the entertainment news show etalk, and CTV’s flagship morning show Your Morning. Mark and Nicolas Mulroney both work in banking.

The abject failure of the Meech Lake and Charlottetown accords, combined with the vicious public opinion toward both the GST and Mulroney’s corruption scandals, led to the cratering of his popularity and the disastrous 1993 election results; this shattered the Conservative Party into several factions and sent it into the political wilderness for more than a decade. The results were more mixed for free trade, which was part of the larger trend toward globalization; it brought economic prosperity in some respects, but also led to the erosion of the middle class and worsening income inequality.

However, Mulroney’s records on human rights and the environment are both strong. And the once-reviled GST has since proved remarkably effective at providing financial stability to the federal government. As Mulroney once told TVOntario, “Every finance minister in Canada would be up a tree without it.” In 2010, the Bank of Montreal’s deputy chief economist Douglas Porter called the introduction of the tax “one of the better moves by federal governments in recent decades.” 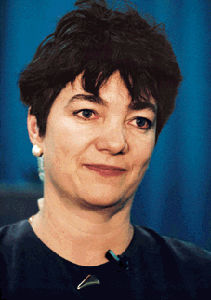