When the Ice Worms Nest Again 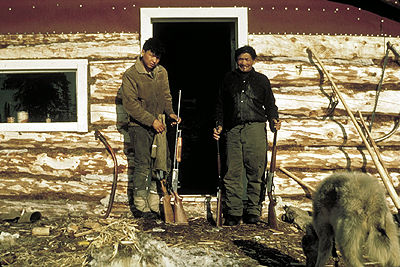 Cabin on the north shore of Great Bear Lake (courtesy Govt of the NWT).
"When the Ice Worms Nest Again." The favourite song of prospectors and trappers in the Canadian north, this ballad later became the theme song for the annual gatherings of silver miners at Cobalt, Ont, and fur trappers at The Pas, Man, as well. Its origin is not clear, but it seems to have been sung first in northern British Columbia and the Yukon and may date from the Klondike gold rush of 1898. Robert W. Service published a piece with this title in his Twenty Bath-Tub Ballads in 1938, but the traditional verses differ considerably from his. Wilf Carter also recorded a slightly different version for RCA Victor in about the 1940s (48-0319). The song is both published (Fowke and Johnston's Folk Songs of Canada, 1954) and recorded (Folk Songs of Canada, CS3) by Waterloo. Alan Mills can also be heard singing the song on Canada's Story in Song (Smithsonian Folkways FW3000). Murray Adaskin arranged the song for strings.

The following lyrics are as recorded by Wilf Carter. Typical for its time, Carter's version attempted to popularize images of Canada's north and its peoples. The song would be considered far more controversial today. Other variants of the song exist.


There's a husky, dusky maiden in the Arctic
And she waits for me but it is not in vain,
For some day I'll put my mukluks on and ask her
If she'll wed me when the ice worms nest again.

In the land of the pale blue snow,
Where it's ninety-nine below,
And the polar bears are roaming o'er the plain,
In the shadow of the Pole
I will clasp her to my soul,
We'll be happy when the ice worms nest again

For our wedding feast we'll have seal oil and blubber;
In our kayaks we will roam the bounding main;
All the walruses will look at us and rubber,
We'll be married when the ice worms nest again.


And when the blinkin' icebergs bound around us,
She'll present me with a bouncing baby boy.
All the polar bears will dance a rhumba 'round us
And the walruses will click their teeth with joy.

When some night at half-past two
I return to my igloo,
After sitting with a friend who was in pain,
She'll be waiting for me there,
With the hambone of a bear
And she'll beat me 'til the ice worms nest again.