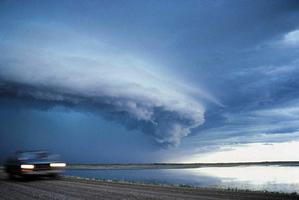 A thunderstorm brewing over Chaplin, Sask. Dramatic thunderstorms are a hallmark of the Canadian prairies (courtesy First Light Associated Photographers). 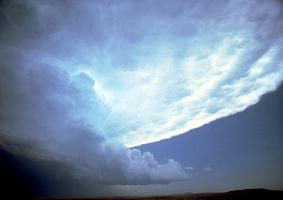 A classic storm structure shows a high, sharp top on the clouds like an anvil. On the flanks are growing towers. These cumulonimbus clouds form in late afternoon when currents of warm air rise to the greatest altitude (photo by Arjen Verkaik, Skyart Productions).
PreviousNext

Weather is defined as the atmospheric conditions prevailing at a specific place and time; climate is the characteristic weather, including average and extreme conditions, over months, seasons and years. Meteorology is the study of the motions, processes and phenomena of the atmosphere. Weather is driven by the interactions of the atmosphere, water in the atmosphere and on the earth (oceans, rivers, lakes), and the solid earth, all driven by solar energy from the sun.

Weather Forecasting is the attempt to understand atmospheric patterns to predict the weather conditions that will occur at a specific place and time, including temperature, wind, cloud, precipitation and humidity. Weather forecasting has many applications including general public use for deciding on appropriate dress, fighting and preventing forest fires, and scheduling airplanes and ships. One of the many factors that determine weather is geographic location. In tropical regions late summer and early fall are the seasons for tropical storms including hurricanes and typhoons.

In the mid-latitudes (between 30° and 60° north or south) there are mid-latitude cyclones which bring a variety of weather including blizzards, heavy rains and strong winds. Thunderstorms are also common in much of the mid-latitudes with the risk of lightning, hail, gusty damaging winds and tornadoes. At high latitudes winter brings the risk of dangerous wind chill, blizzards and extreme cold. Weather is also influenced by events in the ocean such as El Niño or La Niña, natural catastrophes such as volcanoes and changes in atmospheric chemistry such as CO2, smog or even ozone. Climate change could cause significant shifts in the amount and severity of damage caused by weather.

People have always been fascinated and challenged by weather and climate. Scientific weather observation and the development of meteorology as a physical science became possible after the inventions of the thermometer and barometer in the 17th century. Today over 150 national meteorological services collaborate, through the World Meteorological Organization, in exchanging meteorological information several times daily. 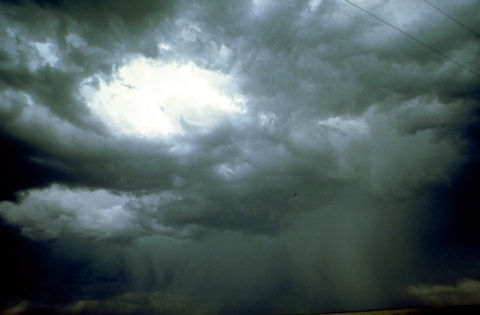