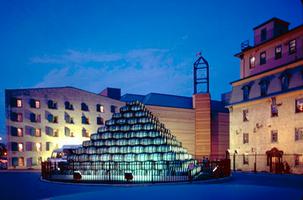 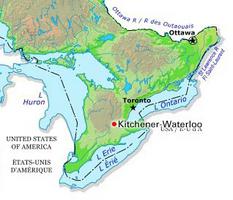 While it was growing in the village-town stage, the people, their houses and their places of employment remained concentrated in a core area, where all mingled daily and virtually everyone was generally known and recognized. The sense of community solidarity learned at this time has continued. The great majority of the people were of German origin and spoke German.

The proportions of the religious censuses of 1861 and 1871 held good for a generation: 54% Lutheran, 9% Roman Catholic, 6% Mennonite, although since 1945 Waterloo has, like the Canadian nation, become multicultural with a wide variety of religious denominations present in the community. Population has increased nearly 6-fold since becoming a city, diluting German characteristics and dispersing the central core.

The town developed steadily throughout the 19th century. The town councillors were virtually a board of trade, and the same sort of people filled church boards, parks and cemetery committees, as well as directing in commerce, insurance and manufacturing. In 1890 they established the 30 ha Waterloo Park using the mill pond of the 1816 grist mill of Abraham Erb, the community's founder, as a centrepiece.

A local specialization in the insurance industry began in the 1860s with Waterloo County Farmers' Mutual and Ontario Mutual Life, the first of its kind in Canada, and now part of the Mutual group. Other insurance companies followed, including Dominion Life; this in turn became part of Manulife Financial, which retains its corporate head office in Waterloo.

The SEAGRAM COMPANY LIMITED distillery (1857) remained a major employer in Waterloo until its closing in 1992. Seagram's had provided a measure of security and co-ordination for the community, as the family, in addition to extensive charities, seeded capital into trust, insurance, furniture, music and other companies. On the site of the original distillery stood a world-class museum, originally interpreting the history of wine and spirits through the centuries and around the world. It developed into an industrial heritage museum commemorating Seagram's historical links with the Waterloo community before closing its doors in 1997. Located adjacent to the newly established Uptown Gathering Place is the Canadian Clay and Glass Gallery (1993), a national gallery dedicated to the silica arts, clay, glass, stained glass and enamel.

Waterloo's major employers are the UNIVERSITY OF WATERLOO, WILFRID LAURIER UNIVERSITY, the Mutual Group and Manulife Financial. There are numerous small and medium-sized manufacturers with no one industry predominating. Computer technology and environmental management are 2 of the fastest growing sectors, with the University of Waterloo attracting many high-technology companies to locate near its campus. Open Text, Research In Motion, Watcom International (now Sybase), Mortice Kern Systems (MKS), the Canadian Industrial Innovation Centre and Raytheon Canada are also located proximate to the university.