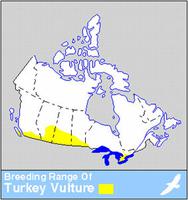 The vulture is a large, long-winged, bald-headed bird of prey, normally abundant in warmer latitudes. Graceful in flight, it glides and circles for extended periods. The one Canadian representative, turkey vulture (Cathartes aura), belongs to the family Cathartidae (New World vultures). It breeds from southernmost Canada to southern South America, inhabiting all but heavily forested terrains. It is expanding its range in some parts of Canada. 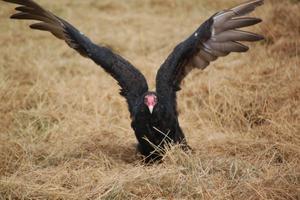 Usually, 2 eggs are laid on the ground, among rocks or in caves. Incubation lasts 30-41 days.

As carrion feeders, vultures are threatened in most parts of the world by the general decline in numbers of wandering herds of wild and domestic herbivores and by sanitary practices involving the removal or burning of dead animals.