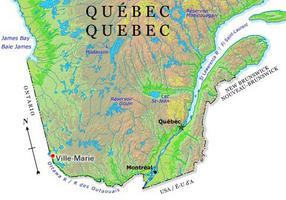 Ville-Marie, Qué, Town, pop 2696 (2006c), 2770 (2001c), inc 1962. Ville-Marie is located on Lake TIMISKAMING near the Québec-Ontario border. It took shape at the end of the 19th century, developing around the Oblate mission settlements and the forestry company posts that had been exploiting the large PINE forests of the Lac Témiscaming basin for several decades. The Oblate mission was established in 1836 near Fort Témiscaming, built in 1686 by fur traders. The fort is now a National Historic Site.

After 1885 settlement of the land around the lake by families from the older regions of Québec led to the establishment of Ville-Marie. The name dates from 1896 and honours the patron of the Oblates of Mary Immaculate, indicating the Oblates' role in the development of the region. Ville-Marie was made a village in 1897. The major town of rural Québec's Témiscamingue region, it has strong ties with the towns of HAILEYBURY and NEW LISKEARD on the Ontario shore of the lake. Tourism and outdoor recreation also help fuel the local economy.