Greater Victoria is located on the traditional lands of Indigenous peoples who share a Coast Salish culture and language. The Pauquachin, Tseycum, Tsawout and Tsartlip had villages on the Saanich Peninsula; the Scia’new and T’Souke were indigenous to Metchosin and Sooke. The Kosampson (now called Esquimalt Nation) occupied locations along Esquimalt Harbour and Portage Inlet in View Royal. The Lekwungen (now called Songhees) occupied lands in and adjacent to the boundaries of the City of Victoria. Archaeological evidence confirms at least 4,000 years of human habitation. The Songhees people fished and harvested camas bulbs and cherry bark here. A tidal pool on a waterway known as The Gorge was associated with the Songhees legend of a wilful girl named Camossung who was turned to stone by Haylas, the mystical transformer. A promontory on Victoria Harbour was a sacred site where cradles for infant children were blessed in pre-contact times.

The site of Victoria was chosen for settlement in 1843 by James Douglas, a chief factor at the Hudson’s Bay Company (HBC) at Fort Vancouver (Washington), near the mouth of the Columbia River. A boundary settlement between the US and British North America was anticipated, and in the event that the 49th parallel was extended to the Pacific, which did occur in 1846, the HBC wanted an alternative fur trading headquarters site under development.

The smaller harbour of Camosack (Victoria Harbour) was chosen over that of Esquimalt for the establishment of Fort Victoria (named after Queen Victoria) because it was bordered by extensive tracts of level to gently sloping land suitable for agriculture. The HBC was also impressed with the potential of surging waters on The Gorge and considered it as a possible mill site.

Victoria became a seat of government in 1849 when the colony of Vancouver Island was created. Douglas, having succeeded Richard Blanshard as governor, concluded 11 treaties with local Indigenous groups between 1850 and 1854 to secure title to land in the vicinity of Victoria. By the terms of the Douglas Treaties, the Crown recognized existing village sites and acknowledged traditional Indigenous hunting and fishing rights; in exchange, for cash and trade goods, Indigenous leaders ceded title of their territories to the Crown. The treaties have featured in several land claims disputes in Victoria and nearby communities.

Victoria remained a small community of less than 1,000 people until it burgeoned as the supply centre and jumping-off point for the Fraser River Gold Rush of 1858. It was the trade centre for the Cariboo Gold Rush when incorporated as a city in 1862. The spacious Esquimalt Harbour nearby was designated as a naval base by the British Admiralty in 1865 and still performs this role today as Canadian Forces Base Esquimalt. Victoria's political function as the capital of the region was consistent through various stages: first as the capital of the colony of Vancouver Island; then of the amalgamated colony of British Columbia (1866); and finally of the province of British Columbia (1871). 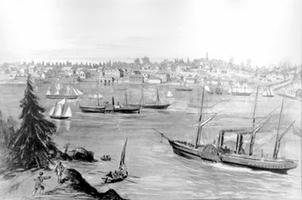 As the metropolitan centre of BC, Victoria was unchallenged until the rise of Vancouver as a city following the arrival of the Canadian Pacific Railway (CPR) at Burrard Inlet in 1886. Although it was a terminus of the Esquimalt and Nanaimo Railway (1886), an important regional line, Victoria's relative economic position declined. By the turn of the 20th century, Vancouver had taken over many of the shipping, commercial and manufacturing functions of Victoria, and the capital city gradually settled into its modern role as a government, naval, tourist and retirement centre.

Victoria's inner harbour, with the Empress Hotel in the foreground (Corel Professional Photos)

The narrow, winding Victoria Harbour and its long extension, The Gorge, make for a picturesque city. In Songhees legend, the large rock beneath the tidal rapids on The Gorge waterway is the unfortunate Camossung, the girl who turned to stone. The inner harbour is flanked by the impressive provincial legislative buildings completed in 1898 and the Empress Hotel (1908). Recent planning developments have capitalized on the unique, old-world charm of this area by establishing an extensive public walkway along much of the harbourfront. Since 2002, port facilities and amenities have been regulated by the Greater Victoria Harbour Authority.

The rehabilitation of Old Town, the late-19th-century commercial core around Bastion Square, began in the 1980s. Victoria's Chinatown, the oldest in Canada, was revitalized at the same time as the Square and is now graced by the colourful and decorative Gate of Harmonious Interest. Still, several heritage buildings have been replaced by modern high-rise structures in the city centre, as downtown businesses struggle to compete with commercial and residential developments in neighbouring Saanich, Langford and Colwood. A consequence of this suburban growth is aggravated traffic congestion known as the "Colwood crawl " on the approaches to Victoria.

Victoria residents tend to be older than those in other Canadian cities. In 2017, 21.1 per cent of people living in Victoria’s metropolitan area were aged 65 or older, ranking it sixth among all Canadian metropolitan areas.

The vast majority of people living in the city of Victoria claim European ethnicity. According to the 2016 census, people citing English origins make up the largest ethnic group, at 38 per cent of the population, followed by Scottish (28.3 per cent) and Irish (22.9 per cent). Visible minorities account for 15.1 per cent of city residents, with Chinese, South Asian, Filipino and Black people comprising the largest communities within this group. A further 4.6 per cent of Victoria residents are Indigenous.

The prominence of government and tourism in Victoria's economy means a high proportion of the labour force being engaged in public administration, personal services and retail trade. Victoria's isolation from major mainland markets has discouraged manufacturing. Some industries have shifted to the mainland in recent years, but others, particularly in the research and development of high technology, have moved into the area.

Victorians receive a wide variety of radio broadcasts from Vancouver and Seattle.

The only daily newspaper is the Victoria Times-Colonist, but there are also several weekly free newspapers, which enjoy a large readership. Several small publishing houses are based in the city. An internationally acclaimed poetry magazine, The Malahat Review, is located at the University of Victoria.

Ferry connections with the mainland have always been of the utmost importance to Victorians. The Canadian Pacific Railway steamship service from Vancouver to Victoria was replaced in 1960 by the provincially owned BC Ferries operating from Swartz Bay, north of Victoria, to Tsawwassen, south of Vancouver. BC Ferries, which is headquartered in Victoria, has operated independently of the provincial government since 2003. Other motor vehicle conveyances are the Washington State Ferries from Sidney to Anacortes and Black Ball ferry from Victoria to Port Angeles, Washington. There is also a passenger-only high-speed catamaran service from Victoria to Seattle.

Air transportation further mitigates geographic isolation of island life through Victoria International Airport, located 22 km north of the city, while seaplanes provide regular service from mainland points to Victoria Harbour. As a shipping port, Victoria has declined in importance, but as a maritime destination, it has grown substantially, with more than 100 luxurious cruise ships visiting its Ogden Point pier every year. Local shipyards have expanded to refit these large vessels. The shipyards anticipate considerable work on federal government contracts for new coast guard vessels.

Administratively, Greater Victoria is one of the most fractured metropolitan areas in Canada, having over a dozen cities, towns and municipalities, each with its own mayor and elected councillors. The question of municipal amalgamation is often raised, but the issue remains in the consultation phase.

Greater Victoria is covered by three school districts and protected by a dozen municipal and voluntary fire departments, as well as four different police departments and several RCMP detachments. Local jurisdictions have resisted efforts by the provincial government to amalgamate police services across the region, but the City of Victoria Police now looks after Esquimalt. Efforts to consolidate regional school boards have likewise failed. However, functions relating to regional parks, water supply and waste disposal are coordinated by the Capital Regional District (CRD). Since 2006, the CRD has planned to build a land-based sewage treatment facility to replace Victoria’s current method of pumping screened effluent into the Strait of Juan de Fuca. The federal and provincial governments have insisted on the facility and offered funds for it. However, a proposal by CRD planners to construct the plant in Esquimalt at the entrance to Victoria harbour was rejected by the Esquimalt Town Council in 2014.

Victoria is well endowed with educational and fine arts institutions. The University of Victoria (founded in 1963) grew out of Victoria College (1903), which was originally affiliated with McGill University and subsequently with the University of British Columbia. Other institutions include the Victoria Conservatory of Music (1964) and Camosun College (1971). In 1995, the former Royal Roads Military College was restructured as Royal Roads University. One of Canada's first private for-profit universities, University Canada West, operated in the city from 2005 to 2011.

The Royal British Columbia Museum and Butchart Gardens, which lies 20 km northwest of the city, are leading attractions for visitors. The Art Gallery of Greater Victoria, the Victoria Symphony Orchestra, Pacific Opera Victoria and annual music and dramatic festivals have enhanced the city's reputation in the arts. Canada's first artificial ice rink was built in Victoria in 1911 (see Sports Facilities). Since then, from time to time, the city has supported professional hockey, along with pro and semi-pro baseball and lacrosse. Victoria played host to the Commonwealth Games in 1994 and the annual Royal Victoria Marathon (1979) is one of the premier competitions in Canada.