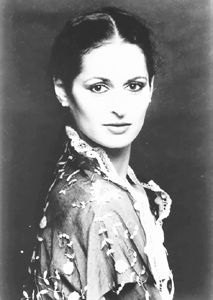 Tennant has expanded horizons since her retirement from ballet into producing, writing, choreographing and other activities (courtesy McClelland & Stewart).

Veronica Tennant started dancing in England at age four and immigrated to Toronto with her family in 1955. As she recalled in a CBC TV interview, “Within one week of our arrival — we didn’t have furniture, we didn't have anything, I don't think I was even in school… but I was in ballet classes.” Tennant studied under famed ballet teacher Betty Oliphant, whose gruelling regimen included nine classes a week.

Tennant trained at the National Ballet School and upon graduation at age 18 was hired into the National Ballet of Canada at the principal dancer level — the youngest in the company’s history. She made her debut as Juliet in John Cranko’s version of the full-length Prokofiev ballet, Romeo and Juliet. The production was later produced for CBC TV by Norman Campbell.

In rapid succession, Tennant added many other leading roles to her repertoire, including parts in Swan Lake, Giselle, and The Nutcracker. With the retirement of Lois Smith, Tennant was quickly adopted by critics and her adoring public as the company’s de facto prima ballerina. Tennant danced the title role in Campbell’s Emmy Award-winning 1968 CBC TV production of Cinderella and continued to excel in the great 19th century classics. She gained even wider renown when she became the National Ballet’s first Princess Aurora in its 1972 staging by Rudolf Nureyev of The Sleeping Beauty, another Emmy-winning program in Campbell’s production for CBC TV.

Tennant’s repertoire also expanded to embrace an enormous variety of roles, including many works created for her superb talent as a dance-actress. Although her career suffered a potentially ruinous knee injury, she took the opportunity of almost a year away from the stage to write a children’s book and have a daughter before making a triumphant return. Two of her most celebrated later roles were as Titania in Frederick Ashton’s The Dream and as Tatiana in Cranko’s Onegin.

During her long dancing career, Tennant was partnered by many of the greatest male dancers of the day, including Rudolf Nureyev, Mikhail Baryshnikov, Anthony Dowell, Fernando Bujones, Richard Cragun and Peter Schaufuss. In what many considered a premature retirement in 1989, Tennant bowed out by giving several dazzling farewell performances of Juliet, the role that had established her reputation 25 years earlier, followed by a special tribute gala with visiting guest artists.

Career After the National Ballet

After retiring from the National Ballet, Tennant remained active in the dance world and performing arts in general, choreographing, hosting, narrating, writing, teaching and directing. She expanded into the theatre as associate director and choreographer at Toronto’s Canadian Stage Company and Tarragon Theatre, and was an actor and dancer at the Shaw Festival during its 1992 season. In 1994, she choreographed Cyrano de Bergerac at the Stratford Festival and Rough Crossing at The Canadian Stage. Tennant also devised and performed a dramatic dance piece, Maud, drawn from the journals of Lucy Maud Montgomery, and co-wrote and performed Choice and Chance Encounters with clarinetist James Campbell and jazz pianist Gene DiNovi at the Festival of the Sound in Parry Sound, Ontario.

In 1995, Tennant shared the title role with Nicholas Pennell in the Rhombus Media film Satie and Suzanne. She also directed productions of Carmen La Gitana at Niagara on the Lake (2005) and Margaret Atwood’s The Penelopiad with The Royal Shakespeare Company at the National Arts Centre in Ottawa (2007).

Career as Producer and Director

Following her retirement from dance, Tennant also became increasingly active as a film and television producer. She was host, creative consultant and writer of CBC TV’s Sunday Arts Entertainment for three seasons. Her first projecty as a television producer was a 1995 CBC/Radio-Canada co-venture, Salute to Dancers for Life/Danser Pour La Vie, followed by a 1996 special about modern dancer Margie Gillis and another featuring Karen Kain in 1997, which went on to win an International Emmy Award.

Tennant is the author of two children’s books: On Stage, Please (1977) and The Nutcracker (1985). She was also an Adjunct Professor at the Faculty of Fine Arts at York University from 1989 to 2004.

Tennant was an honorary chair of UNICEF Ontario from 1992 to 1999, and has served as national ambassador for UNICEF Canada since 1992. Her efforts with the organization earned her UNICEF’s 50th Anniversary Gold-Medal Award in 1996 and the Danny Kaye Distinguished Service Award in 1999. She was also honorary chair of the Ontario March of Dimes from 1989 to 1991.

Tennant served on the board of directors of the Ontario Arts Council from 1975 to 1978. She was the Dancers’ Representative at the National Ballet Company in 1972 and 1984, and has also been the director of the Glenn Gould Foundation (1989–92), the Dancer Transition Centre (1992–95), and the Governor General’s Performing Arts Awards (1992–95). She was on the federal Department of Communications’ Canadian Council on the Status of the Artist from 1991 to 1993, and has served on the advisory council of the Terry Fox Institute, on the board of directors of REEL Canada, on the board of advisors of Opera Atelier and as an ambassador for Artscape. From 2004 to 2010, she served as a member of the board of trustees of the National Arts Centre and as a member of Ontario Ministry’s Advisory Council for Arts and Culture. She was also the chair of the Arts & Culture Committee for Toronto’s bid for the 2008 Olympic Summer Games.

Tennant was the first dancer to be appointed an Officer of the Order of Canada (1975) and was promoted to Companion in 2003. She is the recipient of many awards and honorary degrees, including the Walter Carsen Prize for Excellence in the Performing Arts (2004) and the Governor General’s Performing Arts Award for Lifetime Achievement (2004). She also received the $30,000 Walter Carsen Prize for Excellence in the Performing Arts from the Canada Council in recognition of her “achievement on the stage and as a producer/director for film and television.” In 2005, she was named the Canadian Ambassador for Hans Christian Andersen Year in Denmark, and in 2006, the newly opened Veronica Tennant Studio at the National Ballet School in Toronto was named in her honour. She was named the Cultural Ambassador for the City of Hamilton in 2011 and was inducted into the Encore! Dance Hall of Fame in 2018.