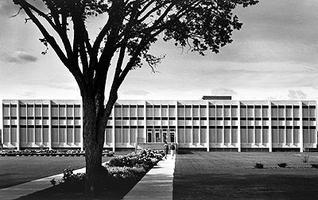 The University of Manitoba, in WINNIPEG, was founded in 1877, the first institution of higher education to be established in western Canada. At first it acted only as a degree-granting body for its 3 founding denominational colleges: St-Boniface College (Roman Catholic), St John's College (Anglican) and Manitoba College (Presbyterian). Wesley College (Methodist) became affiliated with the university in 1888, following by 6 years the privately founded Manitoba Medical College.

In 1900 the university became a teaching institution by an act of the provincial legislature. Thereafter, other colleges also received affiliated status: the Manitoba College of Pharmacy (1902); Manitoba Agricultural College (1906); St Paul's College (Roman Catholic) and Brandon College (1938). Other forms of affiliation have continued to the present.

In 1963 the nondenominational University College, the creation of historian W.L. MORTON, was completed, and in 1964 St Andrew's College, intended to train clergy for the Ukrainian Greek Orthodox Church, became an associated college. It was granted special affiliation status in 1981. In addition, the university recognizes the Canadian Mennonite Bible College, the Catherine Booth Bible College and the Prairie Theatre Exchange, all in the Greater Winnipeg area, as "approved teaching centres." Altogether the system of affiliated colleges provides an accurate replication of the ethnic and religious diversity of Manitoba in the setting of higher education.

The university grew slowly after WWI but expanded greatly during the 1960s and early 1970s to include many programs and offer many unique opportunities to its students. It currently offers 79 degrees, diplomas and certificates, 51 of which are at the undergraduate level. The university has a widely recognized Distance Education program: there are 8000 registrants in over 170 degree-credit distance education courses, including approximately 800 members of Canada's military who are eligible to study in the Canadian Forces University Program offered through Distance Education. Its sports teams have achieved success in recent years and, in 2001, the U of M football team, the Bisons, won the VANIER CUP. Especially noteworthy among its various contributions to knowledge have been the discovery of a treatment for and control of Rh hemolytic disease and the genetic research that transformed oilseed rape into CANOLA, the world's third largest edible oil crop.

The university's motto is "Floreat" (Latin for "flourish" or "prosper"). Its colours are brown and gold. There are currently 17 200 full-time and 5000 part-time students attending the University of Manitoba.