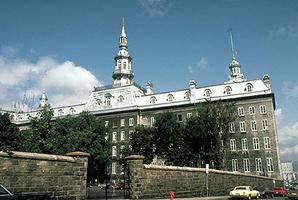 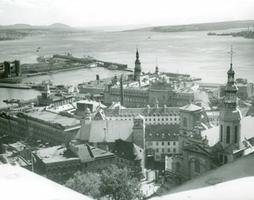 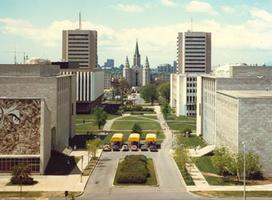 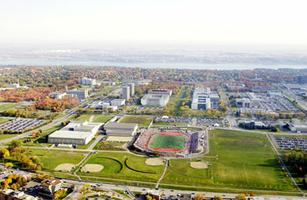 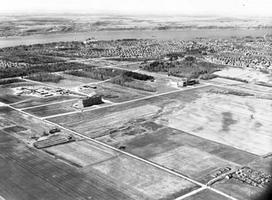 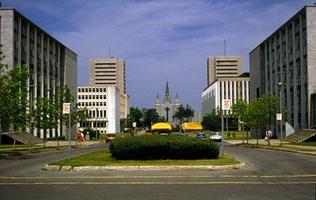 Université Laval was founded 8 December 1852 and opened in 1854. A reflection of colonial society, the institution was, in substance, the work of the Catholic Church through the SÉMINAIRE DE QUÉBEC, but in form, it was the product of the British government by way of a royal charter signed by Queen Victoria. The Séminaire alone financed and directed the institution, which was named in honor of its founder, Bishop François DE LAVAL

The idea of Université Laval was that of a clerical and professional elite in a traditional and rural society: it was a Catholic institution that served the Church and society, mostly by preparing the next generation for the major social occupations of the time - the priesthood, law and medicine. Following the European humanist tradition of the formation of the "honest man," teaching was organized in four faculties: theology, law, medicine and arts. Students came from classical colleges. Starting in 1863 and until the establishment of CEGEPS in 1967, about 15 colleges were affiliated with the Faculty of Arts (this number varied over time). These colleges provided a classical education including humanities, social sciences and philosophy. After eight years of high school studies in one of these colleges, students received a Bachelor of Arts that gave them access to Université Laval.

The main building of the university, constructed in 1855-1856 by Charles Baillairgé, also reflected the traditional society of the time. Built in the neoclassical style, it was erected at the Séminaire near the Notre-Dame Cathedral, within the walls of Old Québec City. In 1902, Université Laval counted 308 students.

In 1878, the Montreal branch of Université Laval opened its doors; it gradually gained its autonomy and became the UNIVERSITÉ DE MONTRÉAL in 1920.

Starting in the early 20th century Université Laval, just as the Province of Québec, slowly evolved towards modernity. Breaking with classical tradition, it introduced higher technical education to support the traditional economy that was based on the exploitation of primary resources. More emphasis was gradually placed on workforce training. The First World War resulted in the teaching of science and technology which, along with social sciences, trained the researchers, technicians, businessmen and administrators needed in a commercial and industrial economy. Until 1920, education was the only mandate of the university, which subsequently got involved in research as a basis for teaching and as a motor of economic and social development. Its research in science and social sciences contributed to loosen its ties with Europe, and Université Laval embraced America.

Change accelerated after the Second World War. Diversification of education, the introduction of research and the larger student population, which reflected the greater access education, required a physical expansion of the university that challenged traditions. By 1925, Université Laval started to move out of Old Québec City, and by 1948 it moved to the American-like Sainte-Foy suburb where it built a campus that represents the most important manifestation of modernist architecture in Québec. These changes were beyond the financial means of the Séminaire de Québec and consequently, the university sought government grants and, in 1920 and 1948, solicited public subscriptions. In order to justify these demands, it emphasized its contribution to society. At the time of its centennial in 1952, Université Laval counted 4000 students.

Starting in the 1960s, the university gradually withdrew from the tutelage of the Séminaire of Québec and evolved towards a public and secular institution. This reflected the spirit of Québec's QUIET REVOLUTION, to which teachers and graduates from the Faculty of Social Sciences of Father Georges-Henri LÉVESQUE particularly contributed. Democratized access to knowledge increased the student population. Swelling the ranks were women, especially, who sought higher education to gain access to the market and to power, but also people who were forced to retrain and constantly improve to meet the needs of the new economy.

In both teaching and research, globalization required changes to allow graduates to find their place in the global market. The university became increasingly financially dependent, mostly on the government but also on the private sector. It justified its existence by demonstrating its profitability to society; to education and research, it added a third mission hitherto implicit: service to society. For instance, the university encouraged researchers to take more account of the needs of society and the environment, and to be closer to its socio-economic partners in the Québec region, where it saw potential markets to exploit research results, opportunities for students, increased funding, etc.

The constitution, administration and structures of the university sought to keep pace with these changes, and administration became increasingly complex, bureaucratic, and professional. In 1968, a long series of reforms was launched. Among others, the University replaced the royal charter by a constitution adopted by the National Assembly on 8 December 1970. Finally, in 1991, as a way to be more open to society, the university adopted a board where the majority of representatives came from society. A little more than a century and a-half after its establishment, Université Laval now counts nearly 45 000 students.

Although the idea of Université Laval has evolved over the years, the institution remains constant in meeting the expectations of an ever-changing society. It is a mirror of society and a motor for its development; a tree rooted in society and an ivory tower that keeps its distance from it. The university constantly strives to maintain a delicate balance between belonging (mirror and roots), which allows it to understand the society from within, and autonomy (ivory tower) which allows it to analyze society from the outside. Between these two poles is a current of interaction that results in Université Laval being influenced by society and influencing it in turn. This relationship is often uncomfortable because the partners evolve at their own rate, although they share a common environment.